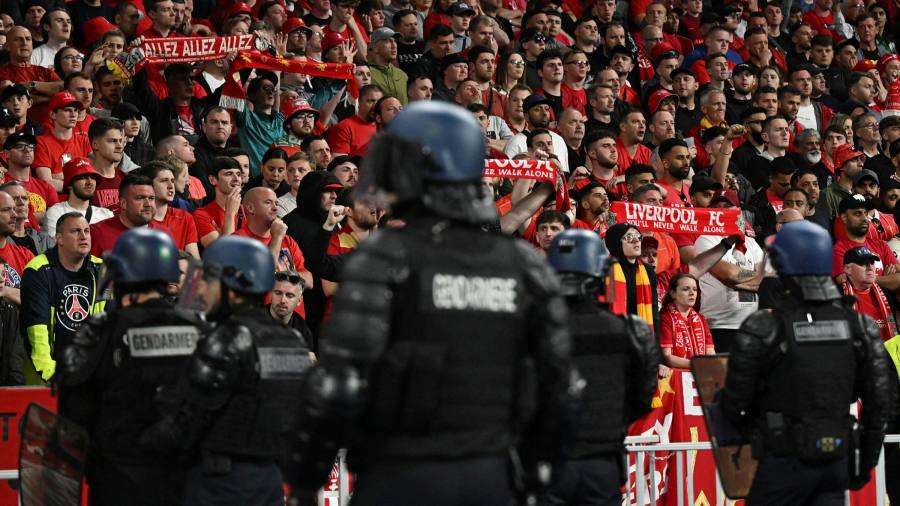 France has ordered sporting and law enforcement officials to analyse the violent clashes and use of tear gas by the police on football fans that marred the Champions League final on Saturday night in Paris.

Amélie Oudéa-Castéra, the newly named sports minister in Emmanuel Macron’s government, convened a meeting of representatives from Uefa, European football’s governing body, the French football federation, the police, the interior ministry and the city of Seine-Saint-Denis, where the stadium is located.

“We absolutely must get to the bottom of what happened,” she said on RTL radio.

The recriminations after the final, in which Real Madrid beat Liverpool in front of 80,000 fans, have intensified since Saturday. British officials have blamed French police for poor security protocols while French officials said some British fans turned up without tickets or with fake ones, leading to blockages at gates.

Some fans also reported being mugged by locals on the way out of the stadium and blamed police for not securing the zone around the Stade de France. Police officials declined to comment on the reports on Sunday.

Nadine Dorries, the UK culture secretary, said the footage and accounts from Liverpool fans and the media from around the Stade de France were “deeply concerning”.

“I urge Uefa to launch a formal investigation into what went wrong and why, in co-ordination with stadium staff, the French Police, Fédération Française de Football, Merseyside Police and Liverpool Football Club.”

Oudéa-Castéra said on Monday that 30,000 to 40,000 people showed up without tickets or with fake ones, and blamed Liverpool and Uefa for allowing paper tickets instead of mobile app use only, which she said “would have permitted only unfalsifiable tickets to be used”.

“With people amassed near the entrances, there were attempts by some to force through the gates, including some young people from the surrounding areas who tried to push through,” she said.

Others cast doubt on that version of events. Ronan Evian, who heads a fans group called Football Supporters Europe, said the 40,000 figure was “a fantasy” that the French authorities were using to blame Liverpool supporters for the behaviour of the 7,000 or so police on duty that night.

Ian Byrne, the Labour MP for Liverpool West Derby, who was at the match, said he had not seen anything like the scenes since the Hillsborough disaster of 1989.

Byrne has written to Liz Truss, foreign secretary, calling for a formal probe into the behaviour of the French authorities and Uefa.

“As a Liverpool fan, I was in Paris for the match and I can honestly say that the situation outside the ground was one of the most horrendous experiences of my life — and as a Hillsborough survivor, I do not make this comment lightly,” he said in the letter.

“I have honestly never witnessed such a hostile environment for a football match. It was truly horrific. Many elderly people, children, disabled people, asthma sufferers and families out for a day to remember were among those pepper sprayed.”

The incidents are politically sensitive, not only for the negative image they projected of France at a high-profile event, but also because the country is preparing to host the Rugby World Cup next year and the summer Olympics in 2024.

Asked whether she was worried, Oudéa-Castéra said: “France has real knowhow of organising big international sporting events [including recent ones in handball and football] . . . I am not worried but I am focused on learning all the lessons from what happened on Saturday to optimise everything for future events.”

Uefa and Liverpool did not immediately respond to requests for comment on Monday.