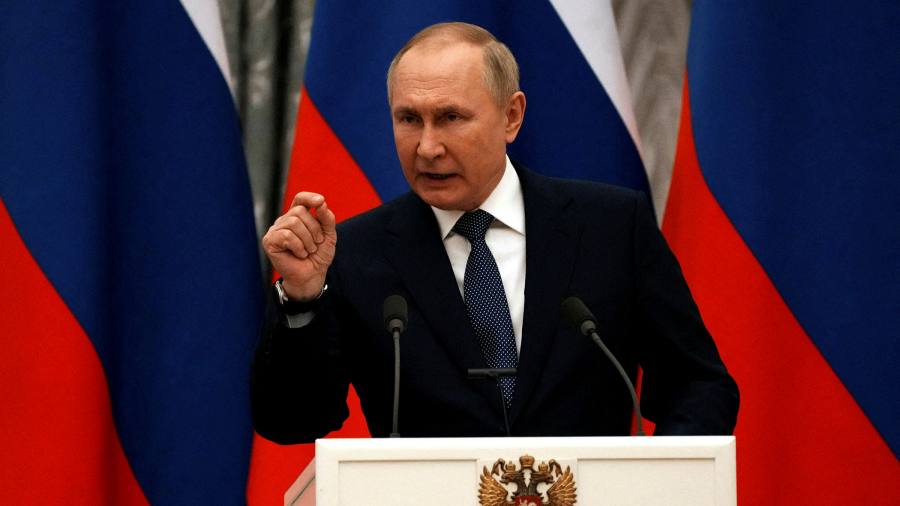 French officials said Vladimir Putin had moved towards de-escalating the Ukraine crisis by promising not to undertake any new “military initiatives” and agreeing to withdraw thousands of Russian troops from Belarus after the completion of planned exercises.

If an agreement — brokered during talks with his French counterpart Emmanuel Macron on Monday — is confirmed by Putin, it could ease tensions in the region after Russia amassed more than 100,000 troops on Ukraine’s borders.

“It’s impossible, because France is a member of the EU, and of Nato, where it is not the leader. A different country in that bloc is the leader. So how can we speak about any ‘agreements’?” Peskov said.

Russia and Belarus are this month conducting huge joint military exercises involving a contingent of as many as 30,000 Russian troops. Peskov said Russian forces, some of which have travelled from as far as the Pacific in recent weeks, would leave after the drills but declined to give a date for their withdrawal.

Asked about a reported French proposal to give Ukraine a neutral status akin to Finland’s during the cold war, Peskov said Kyiv’s pledge to retake the annexed Crimean peninsula amounted to “anti-Finlandisation” and warned that western countries were not taking Russia’s security concerns seriously enough.

“For now, of course, we can’t state that we’re sensing any real ways towards a solution,” Peskov said. “Tensions are rising day by day [ . . . ] so de-escalation is really, really needed.”

Neither Putin nor Macron referred directly to a deal at a news conference after five hours of talks, although France’s president said Putin had assured him of his willingness to talk about de-escalation.

Putin was combative and critical of Nato, blaming the west and Ukraine for the crisis, but said Russia would do “everything possible to reach compromises acceptable to everyone” on European security.

“I think it’s entirely likely that some of his ideas and suggestions, even if it’s probably too early to talk about them, could become part of the basis for our next joint steps,” Putin said of Macron’s proposals.

Russia is demanding Nato pledges never to admit Ukraine and to roll back its eastward expansion, essentially rewriting the post-cold war security order in Europe. Western officials said those requests were unacceptable but attempted to find common ground with Moscow on other issues, such as arms control.

Macron, who is set to meet Volodymyr Zelensky, Ukraine’s president, in Kyiv on Tuesday acknowledged the deep differences between Russia and the west over the Ukraine conflict and said the sides were looking for “new solutions” to ensure security and stability.

“We are conscious of the gravity of the situation and the imperative need in the interest of all to find the path of preserving peace and stability in Europe,” Macron said after the talks. “There is still time.”

According to French officials, there was an agreement not to undertake new military initiatives and to have a broad dialogue on Russian troop deployments.

Macron said the aim was to build “concrete security guarantees” for all the states in the region, including Russia, Ukraine and members of the EU, which would allow the building of a “new security and stability order in Europe”.

Dmytro Kuleba, Ukraine’s foreign minister, on Tuesday said his country would not “not cross our red lines”, which include changes in the country’s foreign policy goals of joining the EU and Nato being forced upon Ukraine, or compromises on sovereignty and territorial integrity.

“We are with interest all waiting for the signals that Mr Macron brought from Moscow,” Kuleba added.

Putin and Macron began their negotiations sitting alone at opposite ends of an enormous oval table, which the Kremlin said was a social-distancing precaution, before moving on to a lavish dinner that included langoustines, Russian fish soup and a choice of sturgeon or venison.

The wine on offer was from a vineyard on the Black Sea that the jailed opposition activist Alexei Navalny, Putin’s most prominent opponent, has claimed is part of a palace complex allegedly built for the president’s use. Putin has denied owning the palace.