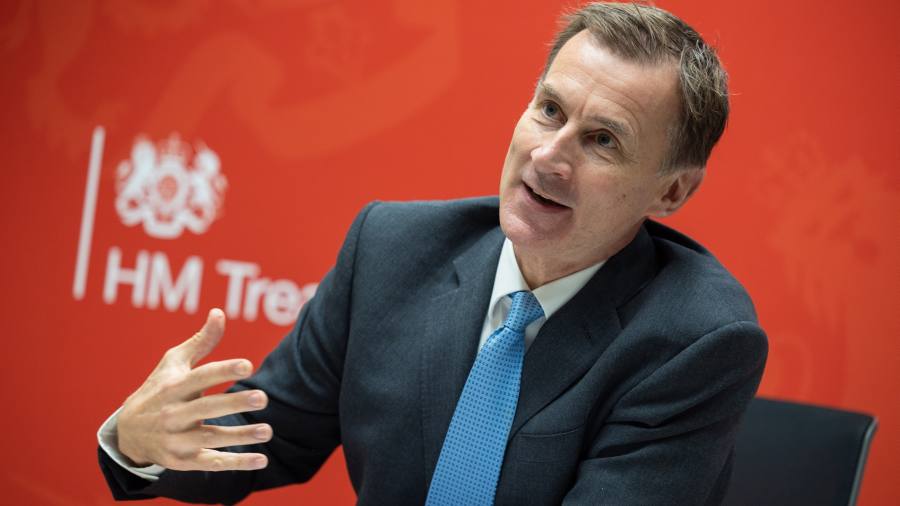 Chancellor Jeremy Hunt is looking to tackle the “begging bowl” relationship between England’s regions and the Treasury by giving local mayors more powers over their own finances.

Government officials said Hunt and Michael Gove, levelling-up secretary, are working to find ways to empower mayors through a form of fiscal devolution, starting with the West Midlands and Greater Manchester.

One ally of Hunt said: “The chancellor and levelling-up secretary want to empower locally elected leaders to get things done, without always banging on a Whitehall door.”

Hunt is studying a memo from Andy Street, Tory mayor of the West Midlands, which calls for “an end to the ‘begging bowl’ culture that undermines the relationship between the regions and the centre”.

The problem was highlighted last week when ministers were attacked over the way the government distributed money from its levelling-up fund that is meant to reduce regional inequalities.

Rishi Sunak, prime minister, was accused of favouring parliamentary constituencies in southern England over those in the north, while Street criticised the way funds were allocated, saying that local decision makers should “decide what’s best for their areas”.

Hunt and Gove are looking at Street’s idea of giving mayors a fixed pot of money, like a government department, with more flexibility on how they spend it.

The initial idea would be to work with the country’s two “trailblazer” mayoral authorities: Street’s West Midlands and the Greater Manchester region run by Labour’s Andy Burnham.

“We plan to offer every area of England that wants one, a devolution deal by 2030,” a government spokesman said. “As part of trailblazer deals, we are also exploring the potential to provide single department-style settlements for mayoral combined authorities.”

Under that plan, the Treasury would negotiate an overall financial settlement with mayoral authorities but, as with government departments, allow them greater flexibility on how to meet agreed objectives.

In recent years, some clusters of local authorities in England have secured an increase in financial autonomy from Whitehall, by signing devolution deals with the Treasury covering areas such as investment, transport and skills.

But in contrast to the Scottish and Welsh parliaments, councils and mayors in England have not gained control over taxes.

In Street’s memo, he calls for a portion of value added tax and corporation tax revenues that are raised locally to be kept in the West Midlands. That idea is seen by Treasury insiders as more complex and less appealing.

In his Autumn Statement last November, Hunt promised new devolution deals for Suffolk, Cornwall, Norfolk and the north-east of England, all of which have since been provisionally signed. “Soon over half of England will be covered by devolution deals,” Hunt said at the time.

Gove is on Wednesday expected to reference greater financial autonomy for regional mayors in a speech to the Convention of the North, a conference of northern political, business and civil society leaders, in Manchester.

Shadow levelling-up secretary Lisa Nandy is expected to promise “a significant expansion of economic devolution in England” in a Labour government’s first term of office.