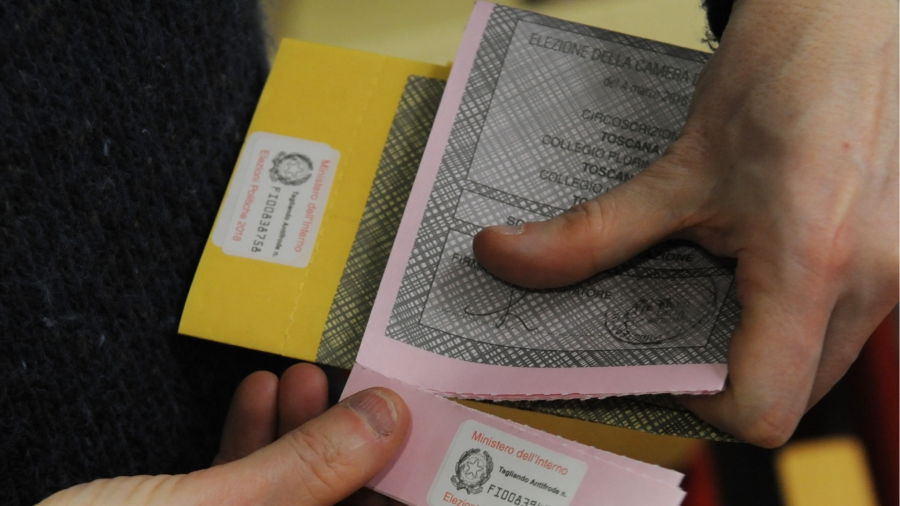 Estonia may be leading the way in terms of allowing its citizens to vote online but Italy is still firmly anchored in the 20th century and using postal services to mail ballots for its expats to fill in ahead of the Sunday election. We’ll explore some of the issues and how significant they may turn out to be.

Meanwhile in Brussels, the European Commission is set to start its first round of so-called confessionals today, consulting EU ambassadors on the next round of Russia sanctions before tabling the latest draft legal text. But don’t expect a series of Catholic-style one-on-ones, these meetings will be held in groups of 4-5 ambassadors and commission officials, throughout the weekend.

The EU-Canada trade deal is now five years old (though not all member states have ratified it) and we’ll bring you up to speed with the effects of the pact.

And a bit of housekeeping: Tony Barber is off this week, leaving tomorrow’s Europe Express Weekend in the competent hands of FT Brussels bureau chief Sam Fleming.

Many of Italy’s 5mn residents abroad have reported serious issues with the postal vote system ahead of Sunday’s election, writes Marianna Giusti in London.

Missing mail-in ballots, attempted voter fraud, unresponsive consulates and even postal votes received with wrong instructions are among the most frequent complaints about the system, which was introduced in 2001 and is available in 200 countries across five continents but which hasn’t been upgraded to the digital age.

The UK alone is home to more than 400,000 Italian residents. Jamil De Dominicis, 32, from Trieste, never received his ballot in the post, and had to queue for one-and-a-half hours at the Italian consulate in London on Wednesday in order to get his duplicate ballot and cast it. “There must have been at least 50 people in the queue who had the same problem as me,” he told Europe Express.

Adding to the difficulties was the timetable for picking up the duplicates at the consulate, with appointments available only when expats were at work. “Voting is a democratic process which should be facilitated,” De Dominicis says of his experience, “it shouldn’t be so hard.”

In Spain, postal ballots were delivered with the wrong instructions, referring to a June referendum, and the correct instructions never arrived. Votes with wrong instructions were also reported in Washington, where the Italian consulate issued a formal apology in a letter, inviting voters to follow online instructions instead.

If some found it hard to cast their ballot abroad, others were offered opportunities to post more than one. In Brazil, home to more than half-a-million Italians, a Belo Horizonte-based teacher was offered eight postal votes by fellow Brazilian-Italians who acquired their citizenship through ancestry and were not interested in participating in the election. “If I wanted, I could obtain dozens of postal votes,” the teacher told Italian newspaper La Repubblica. “All I need to do is ask.”

Ying Zhang, 28, from Veneto, says she received two ballots at her London home that were addressed to former tenants. “Nobody has contacted us to claim them,” she says, “anyone could cast those.”

In the 2018 elections, postal votes received from South America in favour of the centre-left PD Democratic party candidate Adriano Cario were reported to carry the same calligraphy. In December 2021, Cario lost his senate seat after handwriting analysis revealed the votes had been cast by the same person.

While concerns about the integrity of postal votes abroad have been raised by candidates across the political spectrum, who have deemed them unconstitutional, major players such as Giorgia Meloni, Enrico Letta and Silvio Berlusconi have remained focused on their campaigns.

But the so-called fuorisede votes, a category which includes both residents abroad and Italian citizens who cast their vote in a different jurisdiction than their domicile, make up roughly 10 per cent of total electors — a significant proportion which could undermine the authenticity of Sunday’s result.

The Turkish lira plummeted yesterday after the country’s central bank cut interest rates for the second month running despite rampant inflation that exceeded 80 per cent in August, writes Laura Pitel in Ankara.

The EU-Canada Comprehensive Economic and Trade Agreement (Ceta) — one of the few deals the EU has been able to implement recently — came into force provisionally five years ago this week, writes Andy Bounds in Brussels.

Most of its trade elements apply even though 11 of the 27 member states have not yet ratified it because of food safety and environmental concerns. The Walloon regional parliament in Belgium held up Ceta’s signing for several months and the country has still yet to ratify.

The European Commission has therefore been keen to trumpet its benefits, even staging a glitzy anniversary event at a central Brussels hotel on Wednesday with Canadian ambassador to the EU, Ailish Campbell.

Comparing the four years before Ceta with the first four years after, EU exports to Canada grew 22 per cent, double the rate with the rest of the world. They sustain 700,000 jobs — an increase of 75,000.

Given the agriculture sector’s concerns about the deal, commission officials were keen to talk up its successes: the EU exports more beef to Canada than its vast prairies send to the EU. Brussels has banned meat from hormone-fed animals in Canada and cheese producers, especially in Italy and France, have also done well. (Neither Rome nor Paris has ratified the deal.)

Sabine Weyand, director-general of the trade directorate-general, told the event that NGOs and others attacking the deal had not read the safeguards it contained. “If you criticise something, criticise what is there.”

She said the geopolitical situation had changed the debate somewhat. The Netherlands recently ratified Ceta after legislators there said the EU needed allies and resilient supply chains following the war in Ukraine. “We are seeing a new dynamism [in ratifying],” she said.

Canada’s wheat crop would more than make up for the deficit in Ukraine this year, said Michael Scannell, deputy director-general at the commission’s agriculture department. And Canada had sold the EU fertiliser ingredients such as potash to replace lost supplies from Belarus and Russia.

A deal with democratic, high-income Canada is one thing. The next deals the EU wants to submit for ratification, however, apart from New Zealand, are with Mexico and Chile — and they have already been held up by concerns over cheap agricultural imports.

“They are frustrated with us. They will be the true test of whether we are serious about global trade,” said an EU diplomat.