Kyiv diary: ‘Was I right not to leave?’ 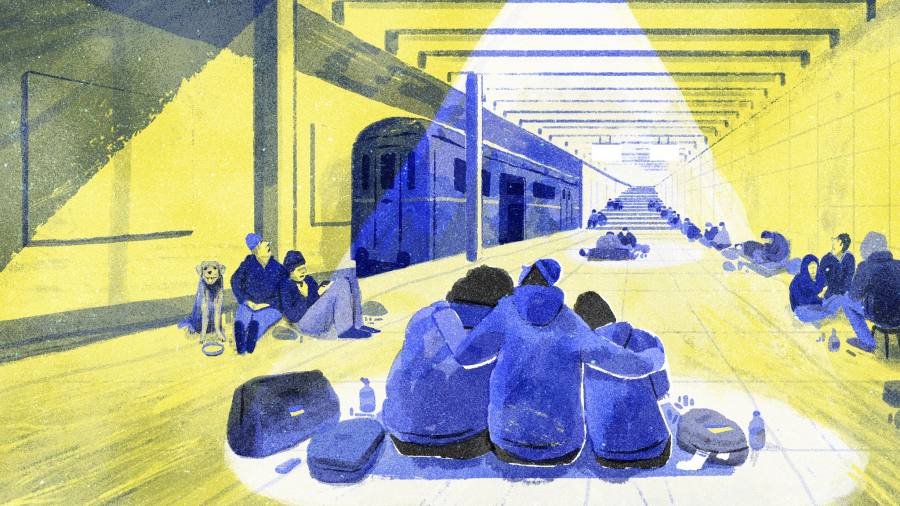 When I returned to Kyiv from the Munich Security Conference on February 20, a good friend suggested dinner at an expensive modern restaurant. At first I hesitated, but then I asked myself: what if war breaks out tomorrow? Don’t deny yourself. I ordered a green papaya salad and shrimp dumplings, and drank two glasses of good Italian wine. One week later I would be dining on sausage sandwiches and sleeping on the concrete floor of a metro platform every night.

Early on the morning of February 24, Vladimir Putin published a video message announcing the start of a “special military operation” in Ukraine. I immediately realised that this meant war, although in Ukraine, despite information from foreign intelligence and what seemed like hysteria in the western media, no one believed until the very end that Putin would go through with it.

During the video message, I heard explosions somewhere far off — definitely the sounds of war. I called and woke my mother, who lives in the suburbs, and told her to get dressed quickly, gather together her documents and get away from the windows, as a Russian rocket could hit at any time. Since that morning I’ve done very little journalistic work, concentrating only on my family’s safety.

Later that morning, I went to my mother’s to discuss the plan of action: to leave Kyiv or stay. But we didn’t get to talk about that. Some relatives from Kherson, the city in southern Ukraine where I was born, called us and said that their teenage granddaughter Nastya was stuck in Kyiv. She was terrified by the first explosions and was in tears somewhere on the other side of the city. We immediately decided to take her in. Thus was formed our little company of women. I’m 38, Mum is 67, Nastya is 17. We’ve been hiding from the war for almost a week now.

For the past 14 years I’ve worked as a political journalist for the Ukrainian media. Ukrainian politics is chaotic but dynamic; I always have something to write about. I covered the elections of four Ukrainian presidents and the 2014 revolution, when Ukrainians kicked out Viktor Yanukovych. He had changed the course of the country too quickly, moving away from Ukraine’s rapprochement with the European Union in favour of closer ties with Russia. The people didn’t forgive him for that.

While presidents changed in Ukraine, in Russia one person held determinedly to the Eternal Russian Ruler’s throne. In one sense, that’s not my business. I write about Ukraine, and Ukrainian politics has enough of its own problems without Russia: oligarchs, the slow pace of reform, the ever-present obstacles in the fight against corruption. But despite our internal problems, we have something that Putin will never be able to accept: freedom, democracy, a strong civil society and the country’s already unwavering course towards integration with the European Union and Nato.

Ukrainians become quickly fascinated with politicians, then disappointed, but unlike Russia, they know how to change them: with fair elections, and in extreme cases with the help of the streets. Putin fears both the first and the second. He cannot forgive us the fact that our post-Soviet country is becoming more and more distant from Russia with every year. So he finds another way out: simply destroy the entire state.

February 24. We three met in my mother’s tiny kitchen for a family council of war. Seventeen-year-old Nastya wasn’t handling the situation well; she wanted to return to her parents in Kherson. Unfortunately, that wasn’t possible. Kherson Region borders the Crimea, and because of the fighting in the south of the country, no trains or buses are going to the city. On the morning of March 1, Russian soldiers entered Kherson.

Going to western Ukraine or an EU country didn’t seem ideal either. Nastya was desperate to return home, Mum wanted to stay in her apartment in Kyiv, and I have to keep them both safe.

So we decided not to leave, for now, but to follow all the safety rules. When the sirens go off, it’s time to run and hide immediately. The basement of the multistorey building where my mother lives is disgusting, so our best protection from bombs is the nearest metro station.

That first time, we didn’t know what to take with us. We spent the whole night sitting on folding chairs: so uncomfortable! On the other hand, we immediately saw the advantages of this particular bomb shelter. Down there, you can hardly hear the street sounds and explosions, and police officers provide safety. They asked us to switch off our phone geolocation service, to avoid being picked up by Russian reconnaissance groups.

We’ve spent five nights in the metro now, and with every day there are fewer people hiding and more people fleeing Kyiv. What pains me the most is the sight of women with young children forced to sleep on the platform floor. I don’t know if the children understand what’s happening; even most adults don’t understand it.

At night in the metro station, everyone reads the news and fears the worst. No one has any illusions that Putin isn’t prepared to destroy the entire Ukrainian population. But we also watch every video address given by Ukrainian President Volodymyr Zelensky, and even those who fiercely opposed him yesterday now admit that he is acting with great boldness. It still gives us some hope.

During my nights down here, I’ve seen tears and heard prayers and the Ukrainian national anthem, played on the trumpet. Volunteers have come with tea, coffee, instant vermicelli and biscuits. One volunteer is a metro worker’s wife who spends the nights here with their five-month-old baby.

With each new night we understand better what we need to bring with us. Instead of chairs, we now have a warm blanket. This is our bed on the floor. We also have three other blankets, so that everyone can cover themselves. But it’s still very cold at night. We sleep in clothes, jackets, boots and hats. Yesterday we were lucky and took VIP seats inside a train carriage. That was the first night we hadn’t slept on the concrete floor.

For food, we bring sandwiches and bottled water. Mum bakes her own bread at home, so we don’t have to stand in huge shop queues.

Today, I have everything but a sense of security. I don’t need money or food; on the contrary, I’m transferring funds to help the Ukrainian army. In two days, Ukrainians collected 1.5bn hryvnia for the Ukrainian military. The Maidan revolution and now the war have taught us to unite and fight for our future.

Sometimes I’m overwhelmed by a panic that a huge Russian army will crush Ukraine. But I see how our military, territorial defence and ordinary people are determined to protect the country. And I’m convinced that this war will finish Putin. He won’t manage to break Ukraine, even if he destroys most of its population. But why should Ukraine pay such a high price for its independence and freedom?

Read more personal accounts of the war in Ukraine:

Writer Oleksandr Mykhed on the language of war

Novelist Haska Shyyan on telling her daughter about the war

An interview with film-maker Sergei Loznitsa, who says ‘Lies bring us to the catastrophe we are facing’

I’m often asked: did the west do enough to stop Putin? I think yes and no. The Russian economy’s descent into the abyss is the result of sanctions. But more support would be welcome. Ukrainians have already died twice for European ideals: first in Maidan in 2014, and again now. Name one other country in Europe where people are ready to die for freedom and ideals. A humanitarian catastrophe and tens of thousands of deaths may await us, but for some reason we are still not worthy to be part of the EU.

My main complaint, of course, is not with the west. Putin could be distracted by his own people going to mass protests. It’s hard to fight on two fronts, suppressing anger within one’s own country and waging war against the Ukrainians. Yes, there is antiwar action in Russia, but it’s still not real anger, real revolution.

I don’t know how this war will end. Was I right not to leave, to stay with my mother and Nastya in Kyiv? Will we survive? Am I a coward for thinking about my family and not working as a journalist now, at such a difficult moment for the country? I know only that Ukraine will endure, pay the highest price and go down in history as the ones who resisted Putin. But what are the history books to us now? Right now, we just want to live!

Kristina Berdynskykh is a political journalist based in Kyiv