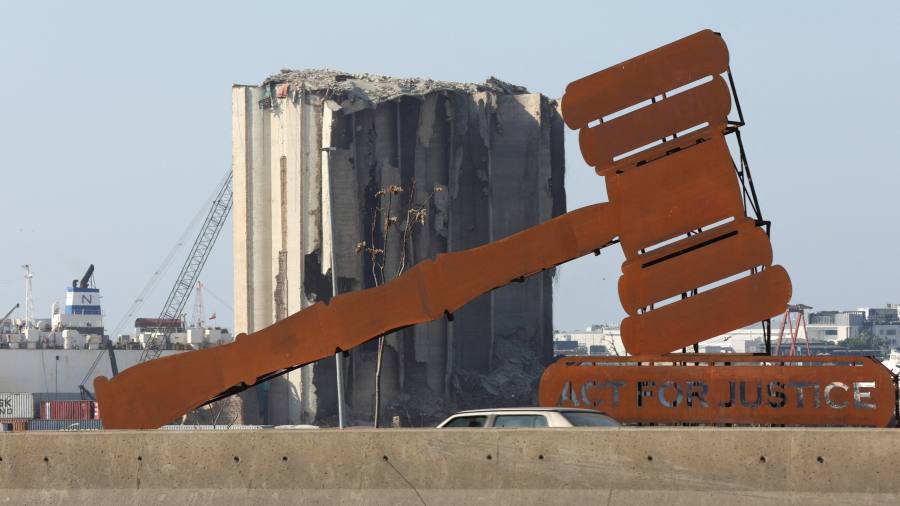 Lebanon’s state prosecutor has challenged the decision to reopen the investigation into the deadly port explosion in Beirut in 2020, after a senior judge resumed his probe that has been suspended amid accusations of high-level political meddling and judicial impropriety.

In a letter seen by the Financial Times, state prosecutor Ghassan Oueidat told Judge Tarek Bitar that his investigation remained paused because the country’s judicial authorities had not yet ruled on whether it could continue. The probe has been on hold for much of the past year, mired in accusations of interference and rows over the role of judges in the case.

Bitar, in a rare public statement, confirmed to Lebanese daily L’Orient Le Jour that the probe had resumed on Monday. His decision to restart was taken “on the basis of legal studies carried out for a month to break the deadlock” over the multiple judicial complaints against him, he told the newspaper. Reuters reported that he had charged a host of senior political, judicial and security figures over the explosions and its aftermath.

The state prosecutor’s attempts to keep a lid on the probe is the latest setback in the long-running quest for accountability over the August 2020 incident, which occurred when hundreds of tons of ammonium nitrate detonated, killing 218 people and injuring more than 6,000. The highly explosive material had been improperly stored at the port for years.

The blast, one of the largest non-nuclear explosions in history, wrecked vast swaths of the capital and came as Lebanon grappled with a serious financial crisis. Many Lebanese blame the country’s unpopular political establishment for both calamities.

A 2021 Human Rights Watch report found that “many of Lebanon’s senior leaders . . . were informed of risks posed by the ammonium nitrate and failed to take the necessary actions to protect the public,” adding that some government officials had been “tacitly accepting the risk of deaths occurring”.

In the wake of the blast, Lebanon’s political leaders promised to bring those accountable to justice. But in a political system rife with impunity, no officials have yet been held responsible.

Bitar’s investigation stalled in 2022 amid accusations of political interference and legal complaints filed by the officials he had summoned for questioning in relation to the investigation.

Lebanon’s highest court is supposed to rule on those complaints before Bitar can resume his probe. However, several of its judges have recently retired and their replacements have yet to be named, in what experts view as a deliberate attempt to frustrate the investigation.

Aya Majzoub, deputy Middle East and north Africa director at Amnesty, said judicial authorities “were quick to dismiss Bitar’s legal analysis without even engaging with it, clearly demonstrating that they are not interested in truth or justice for the deadly blast”.

She added: “We’ve seen time and time again that the political, security and judicial authorities in Lebanon will use the law in a way that perpetrates the culture of impunity, putting their interests above the public interest.”

Bitar has defied threats and pushback from across Lebanon’s political spectrum. News outlets affiliated to Hizbollah, the powerful Iran-backed paramilitary group, criticised Bitar, while the group’s leader demanded his removal.

Lebanon’s judiciary, in which appointments largely depend on patronage in the country’s power-sharing system, has long faced accusations that it lacks independence.

Bitar’s predecessor, Fadi Sawan was removed in 2021, following a legal complaint by two former ministers who had been charged with criminal negligence in the probe. Sawan had attempted to question three former ministers including former prime minister Hassan Diab — who all refused to appear — and charged them with criminal negligence. All deny wrongdoing.

Analysts expect Bitar will continue to face heavy pushback, and those summoned are unlikely to appear for questioning. They also said that if Bitar was removed, it would make it difficult for the families to attempt to seek justice.