Leftwing Petro on track to win first round of Colombia election 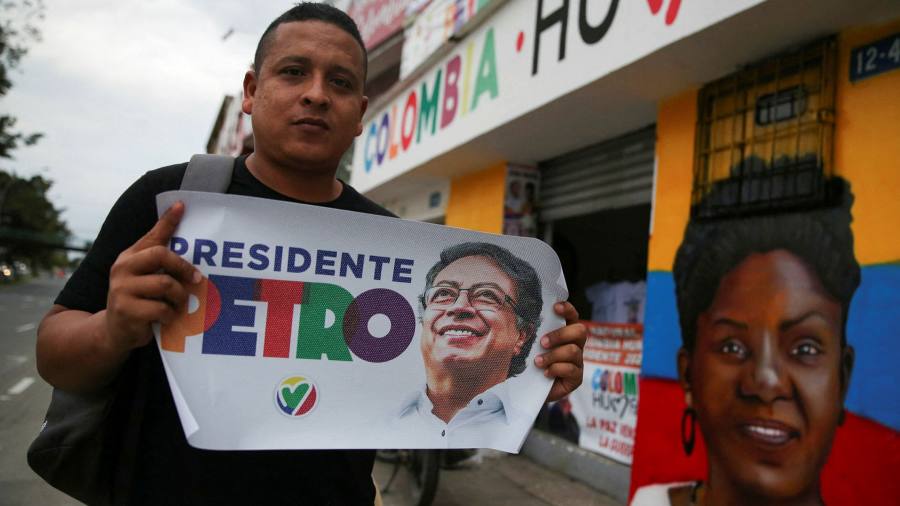 Colombians went to the polls on Sunday in a presidential election that could break the mould of decades of centrist politics and reshape Bogotá’s close relationship with the US.

Leading almost all opinion polls going in to the vote was Gustavo Petro, a 62-year-old former leftwing guerrilla, former mayor of Bogotá and experienced congressman and senator.

If Petro wins, he would be the most leftwing leader in the country’s recent history. Unusually for Latin America, Colombia has never had a socialist government.

Petro wants to ban oil and coal exploration in a country where hydrocarbons bring in half of all export revenue, and he opposes all opencast mining and fracking projects. Instead, he says Colombia can become an agricultural force powered by renewable energy.

He says the state should act as “employer of last resort”, providing work to anyone who cannot find it in the private sector. He wants to make companies pay 70 per cent of their profits in dividends, overhaul the pension system and reform the central bank.

He also wants to reset Colombia’s relationship with the US, renegotiate their free trade agreement, rethink the ‘war on drugs’ and restore diplomatic relations with Nicolás Maduro’s socialist regime in neighbouring Venezuela.

Despite its 50-year civil conflict and widely publicised drug-related violence, Colombia has enjoyed remarkable political stability. Since 1958 it has held 16 presidential elections, one every four years as regularly as clockwork, with each president handing power peacefully to his successor.

But that power has alternated between two traditional parties, the Liberals and Conservatives, drawn from the same elite, excluding the left, the country’s indigenous and black populations, and the poor.

Polls consistently show most Colombians are dissatisfied with their country’s trajectory and want meaningful change.

“I’m voting Petro,” said 42-year-old Marcela Rubiano before casting her vote in Venecia, a working-class district of southern Bogotá. “I have some doubts about him but let’s see if this ex-guerrilla can bring about the changes that we all know are needed.”

While polls have consistently given Petro around 40 per cent of the vote, they suggest he will struggle to reach the 50 per cent he needs to win outright. If he falls short the election will go to a run-off in June, where he would likely face centre-right candidate Federico Gutiérrez or populist businessman Rodolfo Hernández.

Gutiérrez has been Petro’s main adversary throughout the campaign but Hernández has shot up in recent polls and is threatening to squeeze into the second round.

Gutiérrez, a 47-year-old former mayor of Medellín, has promised “responsible change” rather what he says would be Petro’s reckless overhaul of Latin America’s third most populous country and its fourth-biggest economy.

Hernández, a 77-year-old former mayor of the eastern city of Bucaramanga, is running on a populist anti-corruption ticket. He has financed his campaign himself, with wealth accumulated at the helm of his construction company.

Outgoing president Iván Duque is not eligible to stand for re-election and his rightwing government is unpopular. Colombia was convulsed by violent street protests in 2021 in response to his tax reform plans.

The electoral campaign has been overshadowed by threats of violence. Petro and his vice-presidential running mate Francia Márquez have both said they have received death threats. Some 300,000 members of the police and security forces have been deployed to polling stations.

The election will have consequences for the region as well as Colombia.

If Petro wins and if former Brazilian president Luiz Inácio Lula da Silva completes what would be a momentous comeback victory in Brazil’s election in October, the seven most populous nations in Latin America — Brazil, Mexico, Colombia, Argentina, Peru, Venezuela and Chile — will all be under leftwing rule.