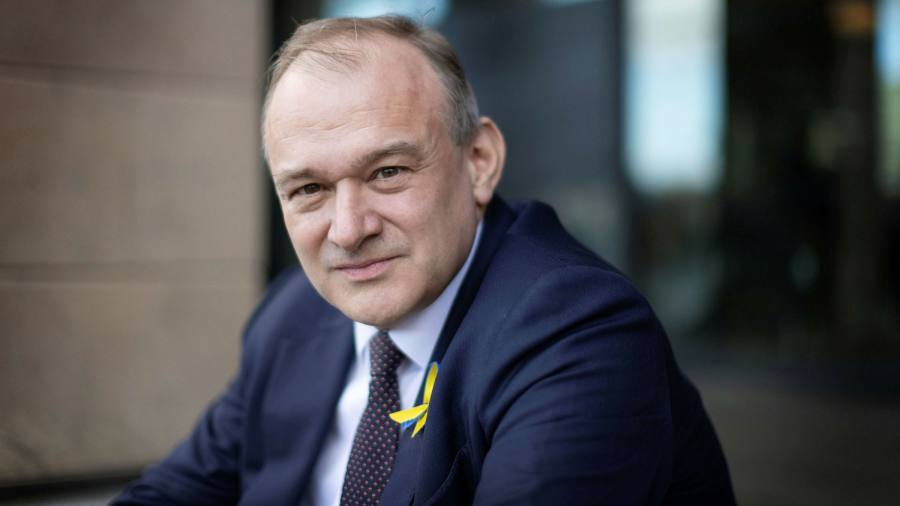 In an interview with the Financial Times, Davey hinted at a pre-election rapprochement with Labour, saying he wanted the Lib Dems to be “influential in the next parliament and that means getting rid of the Conservative government”.

Speaking ahead of his party’s mainly virtual spring conference this weekend, the Lib Dem leader also called for a one-year 2.5 percentage point cut in value added tax to alleviate the cost-of-living crisis.

The FT revealed last month that Starmer was not planning to campaign hard in most of the Lib Dems’ top 30 target seats to give Davey’s party a clear run against the Conservatives. In a tacit understanding between the two parties, the Lib Dems will reciprocate in Labour’s top target seats.

In the interview, Davey said that the moderate Starmer could help the Lib Dems win over soft Tory voters in those target seats because they would not be worried about him becoming prime minister.

I thought he [Boris Johnson] was unfit to be our prime minister from day one. His incompetence is showing in the handling of Ukraine

“I think it is true to say that at the last election there were a lot of people, let’s call them liberal Tories, who wanted to vote for us — they didn’t like Boris, they didn’t like Brexit but they really feared Corbyn,” he added, referring to Starmer’s leftwing predecessor, Jeremy Corbyn.

Starmer, Davey argued, had changed the Labour party “quite significantly” since becoming leader in April 2020. “His front bench looks very different — it is the most able front bench they have put together for a generation.”

Davey described Starmer as “thoughtful” and “impressive”, having worked with him on policy areas relating to coronavirus.

“I genuinely believe, and the arithmetic shows, that you cannot get the Tories out of power in the next election unless the Liberal Democrats do well in the blue wall seats and beyond.”

Davey refused to discuss the possible terms of a deal with Labour in a hung parliament — saying they were “hypothetical” scenarios — but the Lib Dems are committed to electoral reform.

He declined to rule out a formal coalition with Labour — mirroring the pact with David Cameron’s Conservatives in 2010 — although some senior Lib Dem figures believe a less formal deal would be more likely.

Looking ahead to the May local elections, Davey said the party had been buoyed by recent by-election victories in Chesham and Amersham, and North Shropshire, which increased the party’s number of MPs from 11 to 13. However, in recent national polls the Lib Dems have been polling at about 10 per cent, down from the 11.5 per cent they won at the 2019 general election.

Meanwhile, Davey urged the government to temporarily cut VAT in order to tackle the looming cost-of-living crisis set to hit consumers this April.

He said that a “radical package” was needed to address rising costs exacerbated by the Ukrainian conflict. Cutting VAT for a year from 20 per cent to 17.5 per cent, which Davey said would cost £18bn, would provide a much needed stimulus to families and small businesses.

The Lib Dem leader also called on the government to toughen its energy policy against President Vladimir Putin by phasing out imported Russian gas as well as oil. “I just find it wrong that money we are paying is going back to the Kremlin,” he said.

But the Lib Dem leader reserved his harshest criticism for Johnson, the prime minister. At the height of the “partygate” scandal in January, Davey was among those calling for the prime minister’s resignation. Questioned whether he still maintained that position, despite the Ukraine crisis, Davey was unequivocal.

“I thought he was unfit to be our prime minister from day one,” he said. “His incompetence is showing in the handling of Ukraine . . . The PM, whether on sanctions, whether on his overall approach, whether on refugees, I think he has been found seriously wanting.”