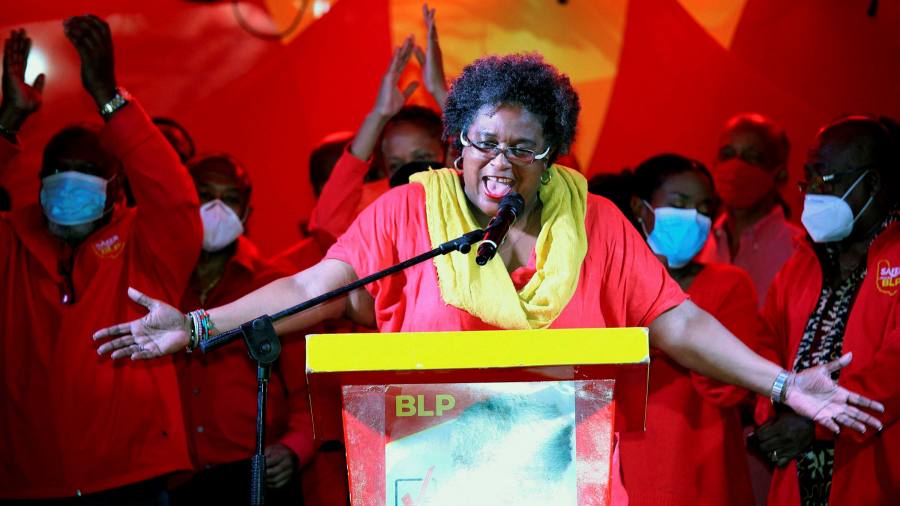 Fresh from a landslide re-election victory, Barbados’s reforming Prime Minister Mia Mottley has vowed to fight climate change and be a voice for humane migration policies.

Mottley made headlines at the COP26 climate conference in Glasgow with a stinging rebuke to world leaders for imposing a “dreaded death sentence” on vulnerable nations by failing to limit global warming.

She told the Financial Times in her first interview after voting ended in Wednesday’s election that Barbados’s history as a British slave colony gave it a special obligation to pursue what she called “moral strategic leadership”.

“The parliament I belong to is the same parliament that passed the 1661 Slave Code,” Mottley said, referring to the first law in the Americas to provide a legal basis for slavery. “In the same way that we are ashamed by it we ought to be moved to put forward to the rest of the world a more humanising condition for migrants”.

“We’ve found ways to liberalise the movement of capital, but we’ve not been able to find a way to bring decency to the movement of people as migrants”, she said, sitting at her home as the election results streamed in.

Barbados declared independence from Britain in 1966 but Mottley last year cast off Queen Elizabeth as head of state and her government declared the island a republic, adopting a female president and conferring the honour of national hero on Barbadian pop star Rihanna.

Some Barbadians complained of a lack of consultation over the decision to become a republic. When Mottley called a snap general election two days after Christmas, pollsters predicted she would lose a few parliamentary seats to the opposition. Instead, her Barbados Labour party, won all 30 constituencies for a second time, leaving parliament without any opposition representatives.

“It was a stunning result, given that for the last 55 years, the two big parties have regularly traded places in government,” said Avinash Persaud, a former head of global currency research at JPMorgan who now advises the government on finance. “It’s a sign that in these uncertain times, the public placed great value on the way the current government managed the health impact of Covid and cushioned the economic impact.”

Mottley, a London School of Economics-educated lawyer who won her first seat at the age of 28, has a broad reform agenda which includes creating a wealth fund and giving shares in it to all adult Barbadians. She also wants to put solar panels on homes to create income for poorer families, improve education, reform state-owned enterprises and build 10,000 houses in five years.

Mottley’s manifesto says that in the new world economy, Barbadians need to become producers of digital content rather than just consumers.

She also hopes to change global institutions. “The world continues not to see and not to accommodate those who are vulnerable as countries, whether it is small island developing states, landlocked countries or former colonies,” she said. “The world continues to be framed very much in a colonial structure and a colonial framework as established in 1945 with the Bretton Woods institutions.”

In common with most of the Caribbean, the economy of Barbados was badly affected by coronavirus, which devastated tourism. The island’s gross domestic product collapsed by 18 per cent in 2020 and only recovered 2-3 per cent last year. An IMF review last November of a $290m loan granted in 2018 concluded that “the outlook remains highly uncertain and risks are elevated”.

Beijing has helped out by lending $325m for road repairs and a water and sewage scheme, prompting critics to accuse Mottley of excessive closeness to China. The premier says her approach is the same as that of Errol Barrow, the island’s first leader after independence, who said Barbados should be “friends of all and satellites of none”.

“We welcome all investment, [as long as] it does not crowd out domestic ownership and investment”, she said. “We need access to foreign capital and investment but . . . it must not be at the expense of our people such that our people become tenants on their own land.”

A rare black female leader, Mottley has already won fame well beyond the Caribbean. Her remark during the election campaign that she expects this term as premier of Barbados to be her last led to speculation that the 56-year-old could move to a big international job afterwards.

Mottley already chairs an IMF/World Bank development committee and a World Health Organization committee on microbial resistance but was keen to play down talk about a future high-profile global post. “I’d love to go on a beach, I’d love to produce music”, she said.

“I managed bands when I first became a lawyer and my first love is music. I tell people if I could sing, I would not be a politician.”

For now, her mission is to ensure that her Caribbean island, with a population of more than 286,000, punches above its weight on the world stage. “In spite of our size we believe that Barbados must be able to speak to create a better world”, Mottley said.