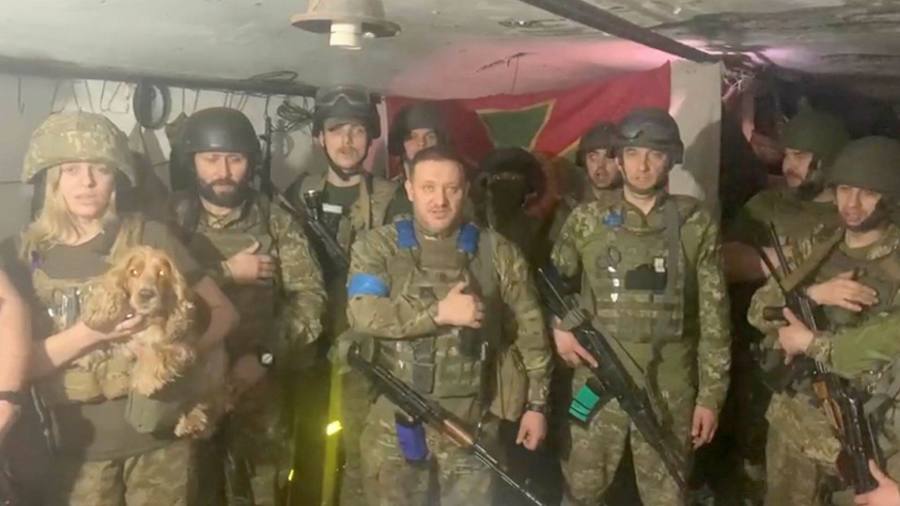 Russian forces attempted to cross the Siverskyi Donets river in eastern Ukraine this month using a pontoon bridge, but their tanks and armoured vehicles were picked off by Ukrainian artillery. So they tried it again. And again. And again.

The Russian army made nine attempts to cross the river in the second week of May, according to Ukrainian defence chiefs. Russia lost about 80 tanks or other vehicles and more than 400 men in the ill-fated operation, analysts have calculated using open source data. It is part of a pattern of Russian behaviour since the invasion began three months ago.

By contrast, Ukraine’s forces have proved to be agile, using the leeway afforded to company and even platoon commanders to shape their tactics according to the conditions on the ground.

Decentralised mission command — following strategic objectives set by military chiefs while giving lower ranks tactical autonomy — is standard Nato doctrine. Ukraine’s forces began to study it after independence in 1991, but only embraced it after Russia started its separatist war in the eastern Donbas region in 2014. Kyiv adopted far-reaching defence reforms in 2016 and US, UK and Canadian forces provided extensive training.

“We have a different style and Ukraine’s is pretty similar to western doctrine — the freedom to adapt and achieve the goals according to their understanding of the situation,” said Mykhailo Samus, director of the New Geopolitics Research network, who spent 12 years in the Ukrainian armed forces. “The Soviet model is to follow the exact written instructions of their commanders.”

Blindly following orders from high command and persisting with failed tactics on the battlefield have been features of Russia’s full-scale invasion, whether its repeated deployment of helicopters to a captured air base in the south — which were destroyed by Ukrainian shelling — or its multiple attempts to seize Hostomel airport using lightly armed special forces and paratroopers.

“For a Russian infantry officer the risk of being punished by his commander is much more significant than the risk of losing his men or being killed himself,” said Oleksiy Melnyk, a former Ukrainian Air Force officer who spent 10 years under Soviet command. “If you see this order is a way to disaster, you have to tell your commander. That is what Russian officers are afraid of the most.”

Ukraine’s dispersed style of fighting — small groups springing ambushes along with hit and run attacks — inflicted severe damage on Russian forces as they advanced on Kyiv early in the invasion. But perhaps the best example of decentralisation was the defence of Mariupol.

Ukrainian forces resisted a Russian attack and siege, diverting thousands of Moscow’s troops for nearly three months with no outside assistance or orders, until they were told last week by President Volodymyr Zelensky that their mission was over.

Ukraine is building a corps of non-commissioned officers, corporals and sergeants who can make tactical decisions on the battlefield and are regarded as the backbone of western armies.

Ukraine’s drive to create a western style corps of NCOs is still in its early stages, according to Jack Watling, senior research fellow at the Royal United Services Institute, a think-tank in London. But Ukraine also has a high number of troops and reservists with combat experience from the 2014-15 Donbas war serving alongside more recent recruits.

Melnyk said Ukraine’s military retained some of the culture of the volunteers battalions created hastily to defend the country in 2014 and subsequently incorporated into the army and national guard.

“Many of them were formed and structured almost like civilian companies or non-governmental organisations,” he said. “They didn’t pay so much attention to military rank but to people with real leadership skills who could take command.”

Liudmyla Buimister, a Ukrainian MP and army commander, said the fighters in her territorial defence battalion were high calibre even if many of them had only had a few months of military training.

“The volunteers are mainly people who in their civilian lives have been quite successful. They are quite gifted. They are not your linear infantry, even if they are being used as such.”

Territorial defence battalions are the responsibility of Ukraine’s regional governors, which have adopted the wartime title of heads of military administrations. Several have become household names commenting on the course of the war in their area, giving the impression of a regionalised command structure.

A US official said the fragmented and autonomous nature of the Ukrainian military made it hard for Washington to gauge the strength of Kyiv’s forces, particularly in the east, although this might also be due to Ukrainian secrecy over troop deployment and casualty numbers.

Ukraine’s military has a centralised command structure, setting overall strategic objectives, like in most other western countries, Samus said. Even territorial defence units, when engaged in combat operations, fall under the control of General Valerii Zaluzhny, Ukraine’s commander-in-chief.

The autonomy and nimbleness that Ukraine’s military displayed in the early days of Russia’s full-scale invasion may be reduced as the war continues, analysts and officials said.

“One of the reasons it was so decentralised was the system wasn’t prepared for a crisis,” said an adviser on defence and intelligence in Ukrainian government. “People had to do what they had to do. We’re not in that position any more. The bureaucrats are back in Kyiv. We have a lot of people trying to get themselves into the process. I fear we’ll be less efficient.”

If and when the Ukrainian army receives more heavy weaponry from the west and tries to push the Russians out of the Donbas and in the south, tighter co-ordination will be required and allowing units battlefield autonomy will become “more complicated”, Samus said.

Meanwhile, in a sign that they were aware of their flaws and adapting their tactics, some Russian commanders were shifting from simple frontal attacks to surprise missions and advancing in multiple directions. For example, this had enabled them to seize the Donbas town of Popasna earlier this month, Samus said.

“It doesn’t mean Russian doctrine has changed, but in some directions maybe they have a more effective general.”