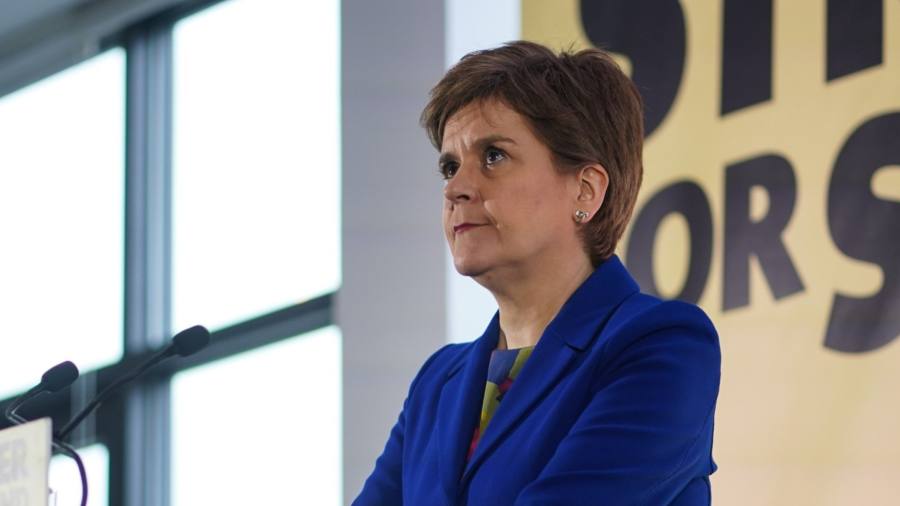 This article is an on-site version of our Inside Politics newsletter. Sign up here to get the newsletter sent straight to your inbox every weekday.

Good morning. Nicola Sturgeon faces difficult questions after the UK Supreme Court ruled, to no one’s particular wonder, that the right to hold any sort of independence referendum was devolved to the UK parliament.

Meanwhile, Rishi Sunak’s political headache over the levelling-up bill has got worse. Good times for Keir Starmer, you’d say. Some thoughts on the challenges facing Sturgeon and Sunak in today’s note.

The biggest story in UK politics this week is also the least surprising: the Supreme Court has ruled that the law does not allow Holyrood to legislate for a referendum on Scottish independence without Westminster’s agreement. Even an “advisory” referendum of the kind the Scottish government was proposing is out of bounds.

In a much more contentious ruling recently, the Supreme Court established the incorporation of the UN convention on the rights of the child into law was outside of the Holyrood government’s legislative competence. So we already knew that the UK Supreme Court, as currently constituted, has a pretty expansive interpretation of which powers remain reserved to Westminster.

And, frankly, they’re not wrong. An “advisory” referendum is, obviously, not a meaningful concept. As was aptly demonstrated in 2019, not upholding an advisory referendum on EU membership was not politically acceptable to the winning side. (More’s the pity if you ask me.) An advisory referendum on Scottish independence would have a similar force in British politics.

But in many ways, the chatter about the Supreme Court verdict is just that, chatter. I spent the first half of this week in Edinburgh, meeting members of the Scottish parliament, political staffers, think-tankers, business leaders and academics, and it’s not like there was any degree of suspense about how this case was going to go.

That’s not to say that there is no possible interpretation of this case that could have gone the SNP’s way — lawyer and commentator David Allen Green has a handy explainer on all this here. It’s just to say: at no point in the life of this particular legal battle did anyone seriously think that this Supreme Court, at this time, was going to allow the Scottish government to hold a referendum on Scottish independence without the prior consent of the UK government.

Of course, the real purpose of this court case was part of the clever balancing act that Nicola Sturgeon and the SNP’s leadership have been managing for some time. That is, how to keep the march towards another independence referendum running in a way that keeps the party’s rank-and-file activists satisfied, without alienating voters who are broadly sympathetic to independence but don’t have a burning desire for another referendum right now.

The list of politicians and commentators who have underestimated Sturgeon’s ability to navigate her way out of a tricky spot is very long. I can’t see what mechanism she is going to find to keep that balancing act going past the next UK general election (which she has said the SNP will fight as a proxy independence referendum). But if there is any politician in the UK who can find it, it’s surely her.

Nimbys to the left of me, Simon Clarke to the right

For Rishi Sunak, trouble comes in pairs. Simon Clarke, former cabinet minister under Boris Johnson and Liz Truss, has put forward an amendment to the government’s levelling-up and regeneration bill to reverse the ban on onshore wind.

Clarke has been an advocate for net zero, planning reform and ending the ban on onshore wind even when this wasn’t in his interest, so we shouldn’t see this move as a wholly cynical one. But as a cynical exercise to do damage to Rishi Sunak — it’s a clever one.

Why? Well, because one route Sunak can take around his internal opponents — as far as planning reform goes — is to take up Keir Starmer’s offer of Labour support to pass the bill. Yes, that would allow Starmer to crow a bit about how he is a sensible and grown-up politician setting the terms of debate while Sunak is a prisoner of his party.

But Starmer has his preferred shadow cabinet and a whomping opinion poll lead, while Sunak has Suella Braverman as home secretary. So the “don’t make Starmer look powerful and in control” ship has sailed, reached the new world, wiped out the native population and is now at the early stages of a new cold war with China.

But of course, if Sunak accepts Starmer’s help on planning reform, he knows that Starmer will also be helping Clarke on onshore wind. (He will also know that something that looks an awful lot like Clarke’s amendment is going to get added on to the bill in the House of Lords.)

A very difficult time within the Conservative party is coming on this bill for Sunak, however he decides to play it.

I try to use time away to watch films that my partner doesn’t want to watch, with mixed results. While you’re watching Bones and All it’s impossible not to be mesmerised by how well-directed it is, and by the trio of compelling actors in the key roles. It’s only a few days after you’ve left the cinema that you begin to realise just how silly it is. (Raphael Abraham’s rather more sympathetic review of the cannibal love story is here.)

But I really loved Annette, now available on Amazon Prime and Mubi: a Leos Carax-directed musical with a soundtrack written by the band Sparks, starring Adam Driver and Marion Cotillard. (Fascinating interview with Carax by Danny Leigh here.)