NRA to press on with Houston conference despite Texas school shooting 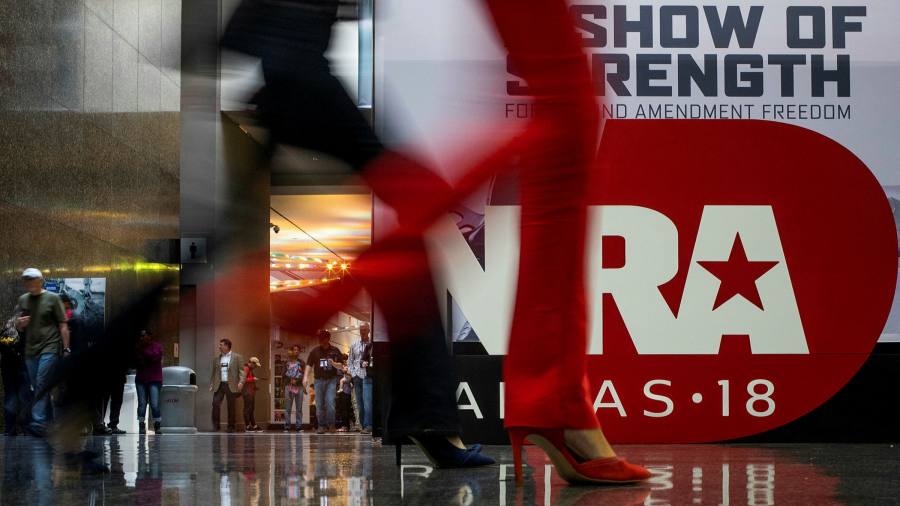 The banners hanging down the front of the George R Brown Convention Center in downtown Houston, Texas, promise 14 acres of guns and gear.

This is where the National Rifle Association, the largest and most influential US gun lobby, will this week hold its annual meeting — roughly a four-hour drive from the small town of Uvalde, Texas, where a gunman at Robb Elementary School on Tuesday killed at least 19 children and two teachers.

There were swift calls for the NRA to cancel the event, which is being headlined by former president Donald Trump and other high-profile Republicans including Texas senator Ted Cruz and the state’s governor, Greg Abbott. Beto O’Rourke, a one-time Democratic presidential candidate who is challenging Abbott for the governorship in November’s elections, urged him to tell the NRA to hold the event “anywhere but Texas”.

But the NRA has vowed to press ahead with the event, which is scheduled to begin on Friday and run through the weekend. “As we gather in Houston, we will reflect on these events, pray for the victims, recognise our patriotic members, and pledge to redouble our commitment to making our schools secure,” it said in a statement.

“We’re full-steam ahead,” said one vendor, who declined to give his name, as he carried equipment into the convention centre on Wednesday afternoon, where the final touches were being put on the exhibition floor and the rest of the huge venue. The event is expected to draw thousands of NRA members.

Trump, the event’s main attraction, confirmed on Wednesday he would still be attending the event.

“America needs real solutions and real leadership in this moment, not politicians and partisanship. That’s why I will keep my longtime commitment to speak in Texas at the NRA Convention,” Trump posted in a message on his splinter social media outlet Truth Social.

The NRA website says the event will provide a “freedom-filled weekend for the entire family as we celebrate freedom, firearms, and the second amendment”. It promises a series of speeches and appearances from political figures and gun-community celebrities, as well as a raffle to win an item from the “Wall of Guns”.

Houston is one of several deeply Democratic urban strongholds in a sea of deep red conservative Republican Texas, where gun rights are revered and firearms widely carried openly. The city’s Democratic mayor, Sylvester Turner, at a city council meeting on Wednesday called on the state’s political leaders not to attend the event.

“Why are elected officials speaking there . . . what message does that send? You can’t pray and send condolences on one day and go and champion guns on the next,” he said.

The mayor’s office said there was little the city could do on its own to cancel the event, which had been originally scheduled to take place in the city in 2020, but had been postponed for two years because of the coronavirus pandemic.

“The city cannot cancel it without getting sued,” a city spokesperson told the Financial Times.

The grounds around the convention centre were quiet ahead of the event, where streets were lined with banners celebrating “150 years strong NRA”.

Police officers at the site said they expected some protests in the coming days and that security would be tight given the heightened tensions around the event and Trump’s presence.

Guns would not be allowed in the main hall during the former president’s speech on Friday as the US Secret Service takes over security, the NRA said on its website.

The Uvalde killings are the latest in a steady drumbeat of tragic mass shootings that have engulfed America. It came less than two weeks after a deadly shooting killed 10 people in a grocery store in Buffalo, New York. The death of young students in Uvalde brought back memories of the Sandy Hook Elementary School shooting in 2012, in which 26 people were killed, including 20 children.

The shooting inflamed a national debate over gun control measures, although both sides quickly retreated to familiar positions. Few expect the latest school shooting to result in meaningful legislative action.

Abbott, widely seen as harbouring presidential ambitions, at a press conference on Wednesday dismissed calls to tighten Texas’s gun laws, instead blaming the attack on a lack of mental health treatment options. Another senior Texas Republican, attorney-general Ken Paxton, said the state should arm teachers and other school personnel, a position pushed by the NRA.

Abbott signed one of the nation’s most permissive gun laws in 2021, which ended requirements for Texans to get a licence to carry handguns.

When asked at the press conference if he still planned to attend the NRA meeting, Abbott demurred. “I’m living moment to moment right now. My heart, my head and my body are in Uvalde right now.”

For the NRA, the collision of its big annual gathering and a mass school shooting echoes the aftermath of the 1999 school shooting at Columbine High School in Littleton, Colorado. The group defied widespread calls to cancel its meeting in nearby Denver, Colorado.

Charlton Heston, the late actor and president of the NRA at the time, created a blueprint that the group has returned to time and again after mass shootings, castigating “reporters perched like vultures” and opposing politicians for portraying the NRA as the villain. “That is not our role in society and we will not play it,” he said.