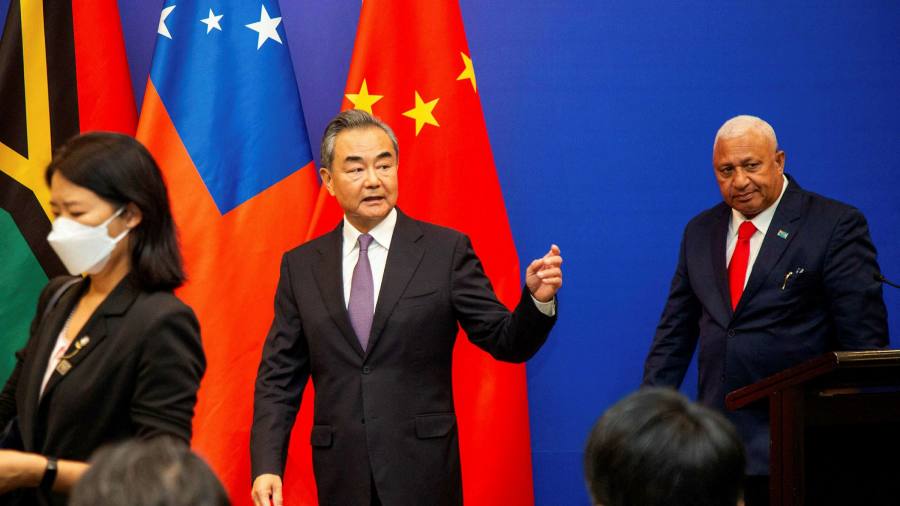 China has suffered its first setback in an escalating tug of war with western powers for dominance in the Pacific Islands after it failed to win support from countries in the region for a comprehensive partnership centred on security.

At a virtual meeting with Wang Yi, the Chinese foreign minister on Monday, leaders from eight Pacific island nations agreed to co-operate in five areas including health, disaster management and agriculture. But Wang said that more discussion was needed on the China-Pacific Islands Countries Common Development Vision that Beijing had proposed.

The blow to China came after the US and Australia strongly pushed back against Beijing’s efforts to entice more of the small, mostly impoverished Pacific Island nations into its embrace.

Penny Wong, the Australian foreign secretary, rushed to Fiji on Thursday, just days after taking office, for talks with Prime Minister Frank Bainimarama. The US announced on Friday, the eve of the Chinese foreign minister’s arrival in Fiji, that Suva would join the Indo-Pacific Economic Forum, Washington’s plan to counter Beijing’s Belt and Road Initiative.

China’s success in signing a security agreement with the Solomon Islands last month, which allows Beijing to deploy both police and military forces to the South Pacific nation, triggered alarm in the US, Australia, Japan and New Zealand, the region’s traditional security partners and main aid donors.

Beijing’s negotiations with Kiribati over a similar deal, reported by the Financial Times last week, and China’s proposal for the regional deal fanned that anxiety.

David Panuelo, president of the Federated States of Micronesia, urged leaders of 21 other Pacific island nations in a May 20 letter not to sign off on Beijing’s proposal, which he warned was aimed at acquiring “access and control of our region, with the result being the fracturing of regional peace, security and stability”.

That Micronesia was wary of the deal was expected as it has a free association agreement with the US, which gives Washington a say over its security relationships with other nations. But Wang’s failure to get immediate approval of the proposal on Monday pointed to broader concerns. The meeting included Fiji, Samoa, Tonga, Kiribati, Papua New Guinea, Vanuatu, Solomon Islands and Niue.

The draft deal mentioned co-operation on Pacific island nations’ concerns such as climate change and fisheries, but security and political priorities, such as co-ordinating positions in the UN and regional bodies, proved trickier.

“The Pacific needs genuine partners, not superpowers that are super-focused on power,” Bainimarama tweeted after the session with Wang. He added that he had sought Chinese commitments to crucial livelihood issues such as an end to illegal fishing and expanding Fiji’s exports.

China signalled it would continue its campaign for more influence in the region. “Don’t be too anxious and don’t be too nervous, because the common development and prosperity of China and all the other developing countries would only mean great harmony, greater justice and greater progress of the whole world,” Wang said, according to Reuters.

The Chinese embassy in Fiji said Beijing would lay out its plans for the region in a “position paper” in response to the questions Pacific leaders had raised at the meeting. They had agreed to discuss the draft communique prepared by Beijing “until we have an agreement”, said Qian Bo, China’s ambassador to Fiji.