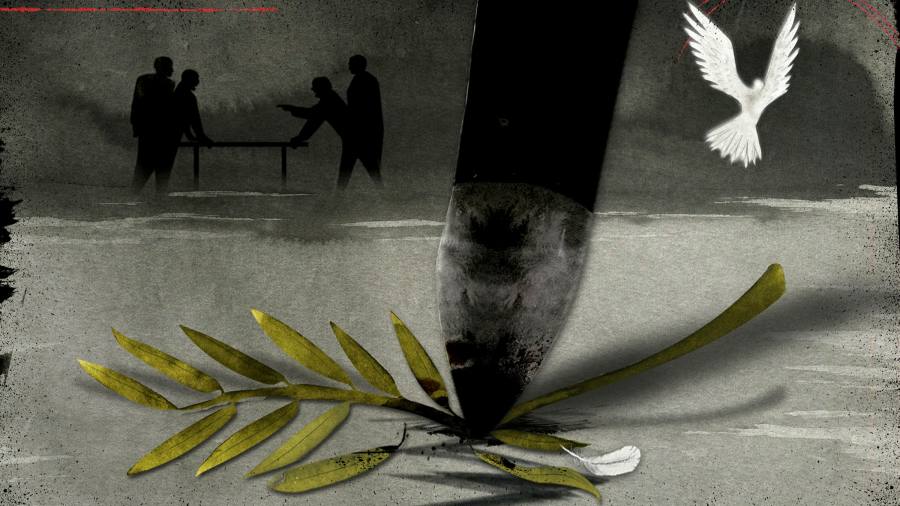 From almost the moment the war in Ukraine began, diplomats have been at work trying to end it. The UN Security Council has deliberated. Vladimir Putin has had regular telephone discussions with western leaders in which they urge him to stop his aggression or at least facilitate humanitarian relief for those suffering under the weight of Russian bombardments. He then in turn explains how they fail to understand Ukraine’s responsibility for these tragic events.

Israel’s prime minister Naftali Bennett visited Moscow to explore a peace initiative some weeks ago, but that now seems to be in abeyance. The only talks that hold any real promise are those that take place regularly between Ukrainian and Russian teams. The most recent of these was in Istanbul. But here too there has been little tangible progress.

For now neither side has an incentive to commit to a long-term settlement. They are waiting for military breakthroughs and a clearer view on the likely course of the war. Should the prospect be one of a long stalemate, then both might feel obliged to compromise. As they wait for news from the front, all they can do is to urge each other to be more “realistic” in their expectations.

Russia has had most reason to scale down its ambitions. It launched this war presuming an early victory, an assessment that was shared in a number of western capitals. The resulting mindset, which assumed that it would be Ukraine who was compelled to make the big concessions, has still not gone away, even though Russia has had to relinquish some of its earlier territorial gains. Its forces are suffering heavy losses and struggle with logistical and morale issues. And on Friday, authorities in the city of Belgorod claimed that Ukrainian helicopters had made the first strike on Russian soil since the war began.

Russia’s original demands, however, are still on the table. So far it has only acknowledged implicitly that it will be unable to achieve regime change in Kyiv or impose demilitarisation.

What will happen if Ukraine sustains this military pressure, and Russian efforts to reinforce its forces and mount new offensives continue to falter? Moscow’s best option in those circumstances will be to call for an imminent ceasefire. This would enable Russia to consolidate its gains.

Ukrainian president Volodymyr Zelensky will see the trap and be obliged to refuse the offer. He can note a record of Russia failing to honour many of the localised ceasefires, intended to allow civilians from besieged towns and cities to escape and for relief supplies to enter. He could also point to the problems with the implementation of the February 2015 Minsk agreement. Russian-sponsored separatists stayed in control of the territory they had occupied the previous year.

While Putin might be happy to start with a ceasefire without an accompanying peace deal, giving him an opportunity to confirm his gains while using a period of quiet to encourage his armed forces to sort themselves out, Zelensky will want a peace deal that only leads to a ceasefire as it is being implemented. His core demand is that Russian forces must leave Ukrainian territory. The war cannot truly end while any remain.

To sweeten the pill for Russia, the Ukrainian leader has come up with ideas to deal with the most contentious issues. The proposal that captured the most attention was one to abandon efforts to join Nato and turn Ukraine into a neutral state.

At first glance this looks like an important step. But Zelensky is after an armed neutrality backed by security guarantees. As he wants these guarantees to be stronger than those Ukraine had before, notably the ones in the 1994 Budapest Memorandum, which were provided in return for giving up its Soviet-era nuclear arsenal. Weeks before the war began foreign minister Sergei Lavrov explained that Russia was no longer bound by any promises because of the “state coup in Ukraine”.

This experience explains why Ukraine was so keen to join Nato and why it now will want guarantees from the US, UK and others that are more or less the same as those as it would get as a member of Nato. However, as always with guarantees, there is small print. Whatever formula is found, Ukraine will carry on being dependent upon its own defences, fortified by more equipment coming in from the west. It might hope that Moscow’s experience of military failure will encourage caution in the future, though it will hardly feel secure if Russia ends this war still holding a chunk of Ukrainian territory.

Kyiv has all but accepted that while it will never agree in principle to Russia’s annexation of the Crimea, in practice this is a fait accompli. But it will not agree to Russian control over the Donbas, the area for which Putin went to war.

It seems doubtful that this shattered territory, with its hostile population and vast reconstruction costs, requiring defence for the indefinite future, will appear now as such an attractive prize. But without it Putin has absolutely nothing to show for all this effort. This war should end with Russian forces out of the Donbas. That would also be the most stable outcome. Without an agreement on this core issue, whatever else has been settled in negotiations, the conflict will not be concluded. That is why the search for a durable peace cannot be separated from the search for military success.