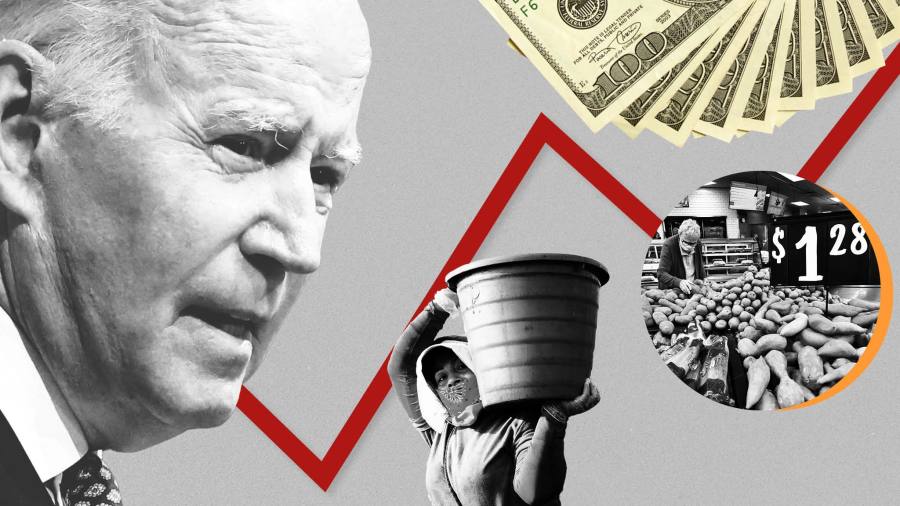 Speaking at a community college in Cleveland, Ohio a year ago, US president Joe Biden heralded the dawn of a new kind of labour market recovery under his watch.

“My sole measure of economic success is how working families are doing, whether they have jobs that deliver dignity,” he said. “We want to get something economists call ‘full employment’. Instead of workers competing with each other for jobs that are scarce . . . we want the companies to compete to attract workers.”

By many measures, Biden and his economic team have achieved that primary goal: the jobless rate has dropped to 3.5 per cent and employers have created more than 8mn new jobs in just 15 months, wiping away fears that the labour market could experience the same sort of sluggish recovery it suffered for years in the aftermath of the financial crisis.

Yet the much-desired “hot” economy the White House and congressional Democrats championed so doggedly — and engineered through the $1.9tn stimulus package enacted in March 2021 — has been accompanied by a messy mix of high inflation, labour shortfalls and supply chain disruptions that have been exacerbated by Russia’s invasion of Ukraine and new waves of coronavirus infections.

These factors are weighing heavily on American households and businesses, meaning Biden and his party are getting little or no political credit for the jobs boom and wage gains ahead of the midterm elections.

It is a troubling verdict in the court of public opinion for an administration that desperately wanted to deliver tangible economic benefits to middle-class Americans, to fend off a new populist backlash and show that US democracy could produce positive economic results.

A CBS News/YouGov poll conducted last week showed that just 36 per cent of Americans approved of Biden’s handling of the economy, while 64 per cent disapproved, a massive gap that will be exceedingly difficult to close ahead of the November vote, when most political analysts are expecting Democrats to lose control of the House of Representatives and possibly the Senate.

“It’s a great labour market for the average American worker, with lots of unfilled positions and a lot of opportunity,” said Mark Zandi, an economist at Moody’s Analytics who has advised Democratic and Republican presidential campaigns. “If someone told [Biden officials] that’s what the world would look like today, with no other colour, they’d say, ‘Fantastic, we’re going to be riding high here politically.’ But that’s not the case.”

In recent weeks, the president and other senior US officials have sought to defend their economic policies in response to criticism from Republicans and even some Democrats that they poured excessive stimulus into the economy, and were too dismissive of the threat posed by higher prices.

“Inflation is absolutely a problem, and it’s critical to address it. But I think at the same time, we should recognise how successful [the stimulus] was in leading to an economy where instead of having a large number of workers, utterly unable to find jobs, exactly the opposite is true,” Janet Yellen, the US Treasury secretary, told members of the Senate banking committee this month.

Heather Boushey, a member of the White House council of economic adviser, said: “Being able to have this conversation about inflation at this moment is because so many folks have jobs. [Inflation] is hard on families. This is definitely a serious and important issue, but it is different than high unemployment.”

Heidi Shierholz, president of the left-leaning Economic Policy Institute think-tank, insisted Biden had shifted the paradigm of the labour market for the better. “We had graduating class after graduating class in the aftermath of the Great Recession for years entering into extremely weak labour markets. That has really lasting effects, and we’re not doing that to Generation Z. We made different choices and that is remarkable for workers,” she said.

Yet the benefits of an expanding labour market are clearly being undercut by the higher cost of living ripping through households, with even hefty nominal wage increases being outpaced by rising inflation in a way that is very palpable to the average voter.

According to an AP-NORC poll conducted this month, 51 per cent of Americans say Biden’s policies have done “more to hurt than help” the economy, while 18 per cent say they have helped and 30 per cent believe they have not made a difference.

This is the third in a three-part FT series on the tight labour economy in the US and what it means for workers, businesses and policymakers. The first part focused on the booming jobs market in Atlanta. Part two looked at the regions, sectors and demographic groups where the market is tightest in the US.

“This is the worst year we’ve had in 40 years in terms of real wages,” said Jason Furman, a Harvard University economist and former adviser to past president Barack Obama. “You’ve had . . . a small number of people gaining and a large number of people losing, and so I don’t find it at all surprising that people who have gotten the biggest pay cuts they’ve ever gotten when adjusted for inflation aren’t that happy.”

Biden has sought to project empathy with Americans displeased with the economic landscape. “For every worker I met who’s gained a little bit of breathing room to seek out a better paying job, for every entrepreneur who’s gained confidence to pursue their small business dreams, I know that families all across America are hurting because of inflation,” he said earlier this month.

But his administration has limited tools to change the dynamic. White House officials had hoped that passage of their $1.5tn, trimmed-down “Build Back Better” economic legislation, including tax increases on the wealthy and childcare subsidies, would cool the economy and expand labour supply in the medium and long term, but those plans have been blocked by opposition in Congress.

Austan Goolsbee, a professor of economics at the University of Chicago and a former economic aide to Obama, said: “There’s not any controlling thing that the White House could do, [like] go down in the basement and [say] ‘Oh, here’s the lever we forgot to flip’ and flip it now. It’s not a wait-and-see attitude, it’s just you have to wait because it takes a long time for this stuff to shift around.”

Ultimately, the fate of Biden’s labour market — and the Democrats’ political hopes — are now in the hands of the Federal Reserve, which is embarking on a cycle of interest rate increases to tame inflation, with the aim of cooling down the labour market without triggering a new recession.

Moody’s Zandi said ideally this would mean slowing the pace of payroll expansion from an average of about half a million jobs per month to about 100,000-150,000 a month, to avoid a scenario in which the economy “blows past full employment” and the jobless rate runs below 3 per cent, which could trigger an even more dangerous wage-price spiral.

“It’s really about getting growth to moderate without going into reverse, and that’s the process we’re in the middle of and you can feel that’s starting to happen,” he said.