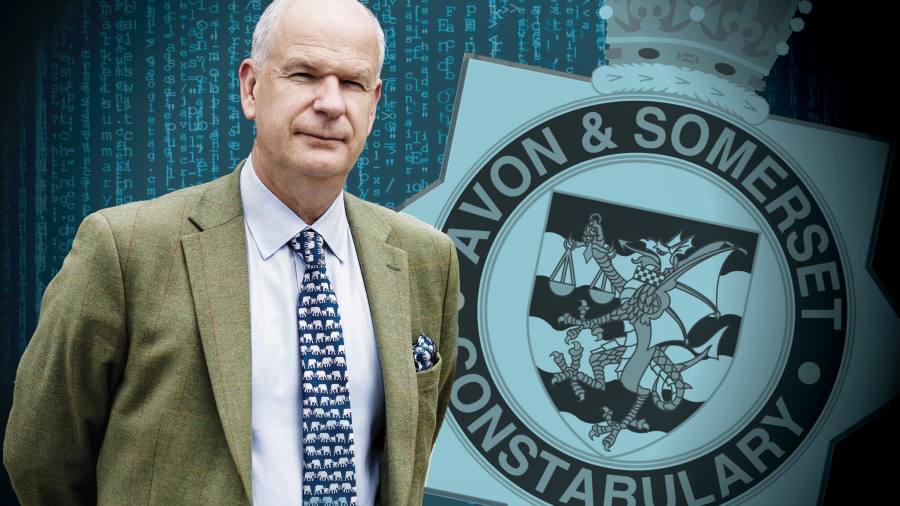 Mark Shelford gained an insight into how fast the epidemic of fraud has been spreading through Britain when he was campaigning for election as police commissioner in Avon and Somerset last year.

“I was stunned by how many people said they had been victim of some kind of fraud whether by dodgy people knocking on doors, online or on the phone,” said the former army officer who is now the lead police commissioner for economic and cyber crime in England and Wales.

It is a role he says that some of his peers warned him against taking, given how much needs to change if the police are to turn the tide in the fight against fraud, which in recent years has become the most common type of crime in the UK.

With the coronavirus pandemic accelerating the migration of criminality to the internet, fraud accounted for 39 per cent of all crime in 2020-21, as recorded by the Office for National Statistics’ Crime Survey of England and Wales, up from 30 per cent in 2016-17.

For online fraud alone, the statistics look even more alarming compared to other countries. Earlier this year, fraud prevention company Seon released research that found that the UK had the second-highest number of online fraud victims in the world after the US, and the worst overall problem relative to its size.

Yet despite this proliferation, only a fraction of police resources are devoted to fighting all economic crime. There is just one dedicated officer for every 2,500 fraud offences, the Social Market Foundation think-tank estimated earlier this year.

Shelford, who for part of his army career was seconded to Nato where he served under US general Jim Mattis later to become defence secretary, acknowledges that police resources tend to be targeted at more violent forms of crime.

But he is sanguine about making Britain a “hostile environment” for fraudsters and said he was working with the Home Office on a national strategy to tackle fraud.

“Mattis used to say you can’t wring your hands and roll up your sleeves at the same time. You have to choose one or the other — I am rolling up my sleeves,” he said in an interview at regional police headquarters in Portishead, west of Bristol.

Shelford lamented the “higgledy-piggledy” layers of policing at national, regional and local level involved in tackling economic crime and suggested that institutional reform was overdue.

“The approach is scattered . . . with no sole agency taking ownership of cases from report to conviction,” he said. “This causes confusion and frustration for victims with agencies either deferring to one another.”

At present, City of London police is the designated lead force in the country in tackling economic crime and has most of the expertise. But it has no control over the regional forces in this area.

The lack of any national co-ordination means that fraud falls between the gaps. The UK’s national reporting centre Action Fraud, which the public is supposed to contact to report this type of crime, has no teeth. In contrast, the National Crime Agency is responsible for combating organised crime but has no direct role in fighting fraud.

The Social Market Foundation has argued that an expanded NCA should be given the lead role in tackling fraud nationally because organised crime groups are now the main perpetrators.

Shelford agrees that there should be a more unified structure but would not be drawn beyond that. “I am uncertain as to which agency becomes the lead but that one overarching agency, a single point of contact for the victim, would ensure continuity, better victim engagement and better information sharing, all of which would improve conviction rates,” he said.

His own force in the west country has had some recent successes in prosecuting fraudsters. But these cases are also illustrative of how difficult it can be for the police to make arrests.

In one instance, the trail of a money flipping fraud — where scammers offer a way to double or triple a victim’s money if they part with a small sum initially — in Bristol led back to Jamaica. In as many as 70 per cent of crimes involving fraud, there is a foreign connection, complicating the task of securing convictions, Shelford said.

The forensic leg work can also be daunting. “Last month, an Avon and Somerset police investigation led to a man being jailed for more than 10 years for a £1.2mn fraud. For the best part of a decade he ripped off firms he worked for,” said Kirstie Cogram, the complex-crime unit manager for Avon and Somerset Police.

“But it took years of hard work by our dedicated fraud team and the inexhaustible support of his victims to get to the point where we had overwhelming evidence,” she added.

Shelford argues that the most cost-effective way of dealing with this scourge is through education. Much of his focus has therefore been on raising public awareness and encouraging other forces around the country to do the same.

But he wants some fundamental changes. In too many instances, fraud is treated as a civil rather than a criminal issue by the police and therefore its victims have to go through civil courts to win compensation, he said.

He also wants the courts to take into account the psychological as well as material damage inflicted by fraudsters when sentencing: “There needs to be a re-evaluation of how the legal system approaches these crimes,” he said.

But the social media platforms often used by swindlers need to take greater responsibility for online safety, Shelford added. A delayed online safety bill going through parliament does start to address that, he said. For example, it makes it a legal duty for the biggest platforms and search engines to eliminate fraudulent advertisements.

But he feels that social media platforms need to be made to shoulder some of the costs of compensating victims. “You won’t get their attention until it affects their bottom line.”