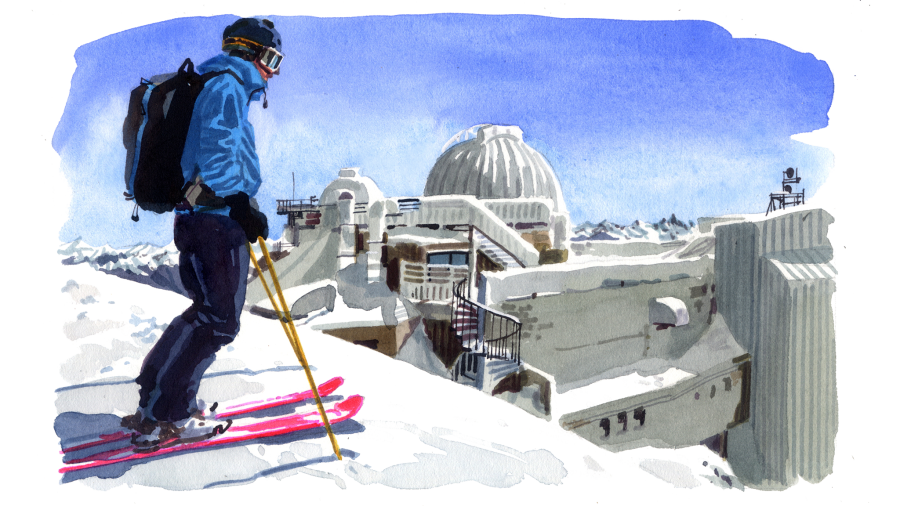 The first visitors to the top of the 2,877-metre Pic du Midi de Bigorre didn’t come to ski. Nor, of course, did they arrive by cable car. From a distance this steep and unforgiving mountain in the French Pyrenees doesn’t look a likely prospect, either up or down. But goat herders and adventurers reached the summit many centuries ago and scientists have come since the early 18th century, studying the botany, weather, geology and, latterly, the night skies.

The snow-covered winter surroundings make for a particularly stable atmosphere, which, in combination with frequently crystal clear skies, led to the development of an observatory on the peak. Building started in 1878, with materials hauled up by mule, and continued throughout the 20th century with the addition of ever more powerful telescopes. A cable car was added by 1955 and in the early 1960s Nasa funded a new telescope used to survey the moon in preparation for the Apollo landings.

Even for non-astronomers, the Pic is well worth a visit. Daytime tourists come just for the view over the Pyrenees (cyclists will probably be familiar with the mountain pass just below the peak — the Col du Tourmalet, one the Tour de France’s most hallowed sites). A lucky few stay the night to experience the inky, star-studded skies; and skiers make the trip to tackle the descent. Best of all is to do the lot: ascend in late afternoon, stay overnight and ski down after a leisurely breakfast, while skiers from the resort of La Mongie are still queueing for the first lift up.

The observatory has 15 bedrooms in what were the scientists’ quarters — sleek and minimal, dominated by a triple-glazed window, there are even fluffy slippers in which to pad to the shared bathroom. Guests are taken into the depths of the observatory and as well as dinner, there’s an in-depth planetarium-style exploration of the cosmos in one of the domes, to be followed by stargazing through a number of the telescopes manned by helpful experts.

From our room, my wife and I walked via rough concrete passages towards the vast Lyot dome, perched on the west side of the peak, where astronomers probe stellar magnetic fields. Climbing endless rickety steel steps between the inner and outer skins of the dome, we finally reached the business end: a vast yoke supporting a telescope with a mirror two meters in diameter. Strange to think that the infinite lightness of cosmic rays needs such mammoth structures to intercept them. Even stranger that they can’t get a bit of heating organised — the cold was bitter, but apparently that’s just how they like it for optimal image quality.

The following morning, when it was time to depart, we did so via another concrete tunnel, followed by a clattery steel stairway then a door that looked like a prop from Ice Station Zebra. Finally, an awkward snowy-icy scramble to reach a safe point where our guide, Claude Etchelecou, watched as we clicked into our skis while trying not to drop anything down the steep, featureless face beneath us. That was to be the day’s big skiing challenge, with no warm-up. In deep snow conditions this slope alone would be the reason you’re advised to come with a guide, to negotiate the safest line with minimal avalanche risk. When it’s firm to icy, it’s hard to imagine how anyone could help if you started to fall.

We focused on Claude’s languorous turns — he’d done this many times before — and made it to the bottom of the critical section intact. Even though we were just a fraction of the way down from the peak you could sense that everything to follow would be plain sailing, a feeling confirmed by a leisurely traverse of a high plateau, passing snow-blown vestiges of buildings from where, before the installation of the cable car, a funicular once climbed straight up the face we’ve just skied.

Heading east past the Roche Noir and into the Arizes valley, the way on was effortless skiing over rolling slopes, with long ridges towering above us, then down into a river valley to glide gently over pastures. The sting in the tail was a twisty trail through forest; I wondered just how much lower we’d be going, not just because my thighs were threatening to boil over but because it was obvious we were a long way — and the wrong side of a ridge — from La Mongie, where we were staying. But Claude had thought of everything: we emerged from trees on to a road, right by a handy bus to take us back to the pistes of La Mongie, the observatory just visible far above.

Eric Kendall was a guest of Hautes-Pyrénées Tourism (pyrenees-holiday.com) and the Pic du Midi (picdumidi.com). The “Night at the Summit” package costs €469 for two people, including dinner, breakfast, use of telescopes and guided stargazing. For the descent, Evasion Hors Pistes (horspistes.fr) offers guided ski descents from €150 for two people