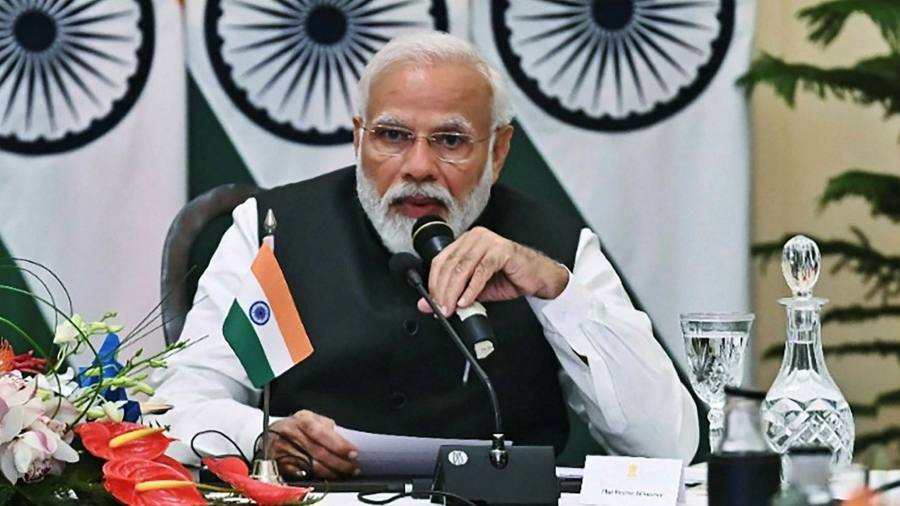 The meeting between Modi and Lavrov topped off 48 hours of intense diplomatic activity in New Delhi, with visiting envoys from the US and UK seeking to persuade India — a longstanding partner of both Moscow and Washington — to take a stand against the invasion.

“These days our western colleagues would like to reduce any meaningful international issue to the crisis in Ukraine,” Lavrov said. “We appreciate that India is taking this situation in the entirety [of its] effects, not just in a one-sided way.”

Lavrov also stoked western concerns that New Delhi might agree to adopt a rupee-rouble trading mechanism. “More and more transactions will be done using national currencies and bypassing [the] dollar-based system,” he said, but gave no details.

The Indian prime minister’s office said Modi in his meeting with Lavrov again called for an end to violence and stressed India was ready “to contribute in any way” to working towards peace.

Rajiv Bhatia, a former ambassador and 37-year veteran of India’s foreign service, said there was an ongoing “diplomatic tug of war, where each side wants India’s total support”.

“This is a very tricky situation where three of our friends [the US, EU and Russia] are engaged in a serious conflict,” added Bhatia. For India, “the challenge essentially lies in keeping all our friends reasonably happy”.

India has worried its western partners by considering the viability of a rupee-rouble arrangement that could help keep trade with Russia flowing and sidestep US-imposed financial restrictions. Gina Raimondo, US commerce secretary, said this week it would be “deeply disappointing” if India were to pursue the sanctions-busting mechanism.

Antony Blinken, US secretary of state, called India’s foreign minister S Jaishankar on Thursday to discuss “the worsening humanitarian situation in Ukraine”, among other topics.

Although India and Russia’s bilateral trade is modest at about $8bn a year, the Asian nation has strategic reasons to maintain financial ties: Moscow has been New Delhi’s primary arms supplier for decades.

And while India gets most of its oil from the Middle East, data showed Russian oil imports to India were set to quadruple in March.

Daleep Singh, US deputy national security adviser, told journalists in New Delhi on Thursday that Washington “would not like to see . . . a rapid acceleration of India’s imports from Russia as it relates to energy”.

But Jaishankar defended purchases of discounted Russian oil by Indian buyers. India still sourced less than 1 per cent of its overall oil needs from Russia, Jaishankar said, but “when oil prices go up, I think it’s natural for countries to go out into the market and look for what are good deals for their people”.

In a few months, “I suspect we won’t be in the top 10” buyers of Russian oil and gas, Jaishankar added during a frosty public exchange with visiting UK foreign secretary Liz Truss. The UK Foreign Office said Truss was visiting “as part of a wider diplomatic push following Russia’s illegal invasion of Ukraine”.

The US views India as an important regional counterweight to China — New Delhi has had a particularly tense relationship with Beijing since the deadly border clashes in 2020. The Quad — the US, Australia, Japan and India — form an Indo-Pacific security partnership. But US president Joe Biden has called India “somewhat shaky” in the Quad’s otherwise united front to Putin’s aggression.

“I don’t think anyone would believe that if China once again breached the [contested border zone] that Russia would come running to India’s defence,” Singh told media on Thursday.