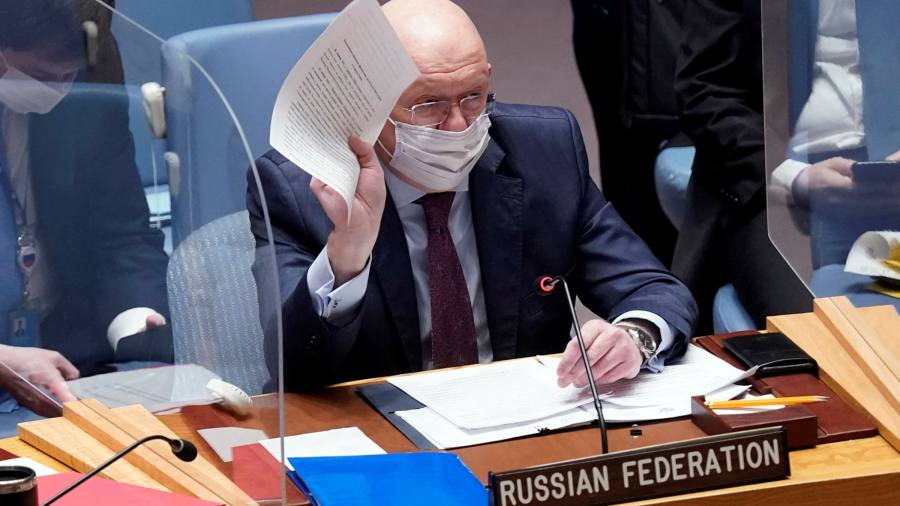 Russia sent a new written response to the US on the Ukraine crisis on the eve of a planned call between the two countries’ top diplomats as the diplomatic process to defuse the prospect of armed conflict in Europe yielded some signs of life.

The move followed a day of high tensions at the United Nations Security Council, with Moscow launching a blistering attack on the US for “whipping up hysteria” over a potential invasion of Ukraine amid repeated warnings from Washington that Vladimir Putin, Russia’s president, is preparing to attack.

“We can confirm we received a written follow-up from Russia. It would be unproductive to negotiate in public, so we’ll leave it up to Russia if they want to discuss their response,” a US state department spokesperson told the Financial Times.

“We remain fully committed to dialogue to address these issues and will continue to consult closely with our allies and partners, including Ukraine,” the official added.

Antony Blinken, US secretary of state, and Sergei Lavrov, Russia’s foreign minister, will speak by phone on Tuesday morning, their first conversation since the US sent its own written response to Russia’s security demands last week.

“There is only one individual who from the Russian side can determine what Moscow does or does not do,” Ned Price, state department spokesperson, said ahead of the call, referring to Putin. “His response is the response that matters most to us.”

The US has rebuffed Russia’s demands that Nato drop its open-door policy on countries that can join the alliance, but the exchanges have also focused on other issues such as troop deployments in eastern Europe, arms control and missile placements.

Nebenzya also said there was “no proof” that a Russian invasion of Ukraine was imminent.

He compared the US warnings to Colin Powell’s fateful appearance at the UN in 2003, when the late secretary of state laid out evidence that Iraq had weapons of mass destruction. “They didn’t find any weapons,” Nebenzya said.

“They are making heroes out of those people who fought on the side of Hitler who destroyed Jews, Poles, Ukrainians and Russians,” Nebenzya said of US support for Ukraine, without elaborating.

The meeting in New York came amid a ratcheting up of tensions between Moscow and the west over a possible invasion of Ukraine, with Washington threatening to impose sanctions against Putin and his inner circle in the event of a military incursion. Russia and China had voted to block the meeting from taking place.

Linda Thomas-Greenfield, US ambassador to the UN, accused Russia of “attempting, without any factual basis, to paint Ukraine and western countries as the aggressors to fabricate a pretext for an attack”.

“In addition to military activity, we’ve also seen a dramatic spike in cyber attacks on Ukraine in recent weeks,” she said. “Russian military and intelligence services are spreading disinformation through a state on media and proxy sites.”

Thomas-Greenfield defended the push to discuss the tensions at the UN, arguing that while diplomatic exchanges between Moscow and western capitals had taken place in private it was “now time to have a meeting in public”.

However, she said that while the situation was “urgent” and “dangerous”, the US remained committed to solving the crisis through peaceful diplomacy.

She added: “We’re offering them an opportunity to address these concerns at the negotiating table. The test of Russia’s good faith in the coming days and weeks is whether they will come to that table and stay at that table until we reach an understanding.”

On the military front, US officials warned Russia’s preparations for a possible invasion continued.

John Kirby, the spokesperson for the Pentagon, said the US had seen additional Russian ground forces moving into Belarus and along the Ukrainian border, even over the weekend.

Kirby added the US was also closely watching increased Russian naval activity in the Atlantic and the Mediterranean.

US President Joe Biden has said he is prepared to send troops to Nato members on the eastern flank of the alliance to bolster their defences. Kirby said there were “active discussions” inside the administration and within Nato about those potential moves, noting troops would only be deployed if they were requested by allied countries.