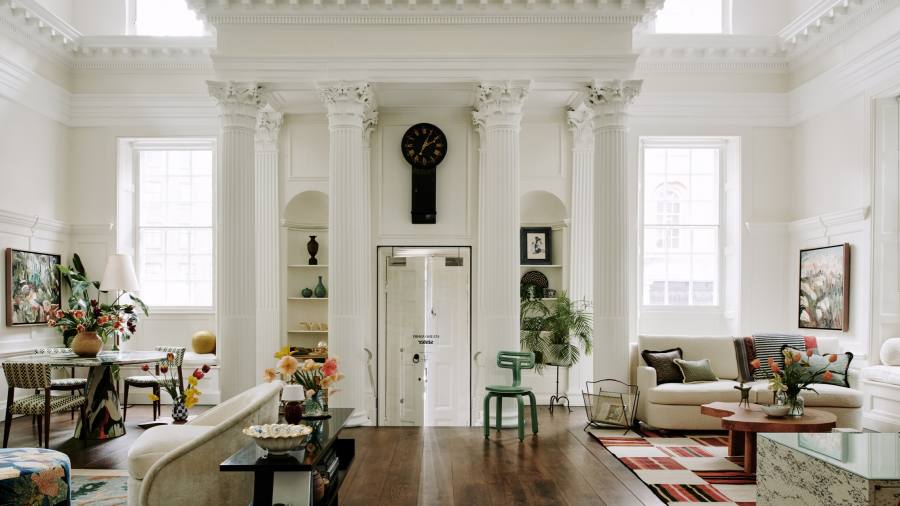 Few designers can boast quite such inspirational digs as designer Sophie Ashby’s new St James’s Park hub in London. Built in 1709 as the home of The Bluecoat School – a philanthropic place of protection and education for underprivileged children – the redbrick building is known today simply as Blewcoat. “It definitely feels appropriate to be designing beautiful spaces in such an incredible place,” says the 34-year-old designer, who relocated her 15-strong Studio Ashby team to the site in December and has since been putting the finishing touches on the space.

Ashby not only welcomed the chance to bring her team together at what she affectionately terms “the mothership”; these grandly proportioned walls also helped her to realise the long-held ambition of becoming a shopkeeper. This month, Blewcoat opens its doors as an appointment- only showroom and shop for Sister, Studio Ashby’s playful sibling line of decorative interiors and furniture, established in 2020 to serve, she says, “her mates and peers who can’t afford the whole Studio Ashby design shebang”.

Her new space is one of several home-from-home destinations springing up in London. House of Hackney moved into a new gothic dwelling, St Michael’s clergy house in Shoreditch, earlier this year – the interior is set up as a real home with an aesthetic that is a Victorian-1970s mash-up with a convivial atmosphere.

While Ashby’s Blewcoat is a statement of future intent, the remnants of the building’s early charitable origins hold strong. Above the Doric entranceway, beneath an elegant clock face, visitors are greeted by the small but significant figure of a young scholar in a frock coat, yellow stockings and the blunt-toe buckle shoes typical of the day. With one hand aloft, he personifies a sort of 18th‑century piousness and modesty that’s swept away inside where the Corinthian-columned interior vestibule and the sheer scale of the single-roomed upper floor, with its 6m-high ceilings, takes the breath away.

More of a retail playroom than a traditional store, the interior is decorated with a series of vibrant art and vintage-adorned mise-en-scènes reminiscent of Ashby’s Spitalfields home. There are the studio’s monochrome stripe Toucan daybeds (£4,790), tapestry-swathed Chess Swivel chairs (£4,050) or the Tibetan motif Tiger rug (POA) that enlivens her own bathroom. “I want it to feel like you’re coming over to my house,” she adds. Unless you go down to the basement – where there’s a meeting room, soft (fabric and textiles) and hard (material finishes) sample rooms and storage rooms – it’s easy to forget this is a place of work.

Upstairs, movable banks of desks inhabit the far end of the space, the fireplace is shielded by a pair of towering cabinets, and accessories are scattered throughout: African sculpture, wooden vessels, fabric-clad storage boxes, plants, glassware and, of course, cushions (“You can’t be an interior designer without doing some cushions,” she smiles). In one of the semicircular niches punctuating the walls, along with the endless windows, are the cheery ceramic vases born out of a collaboration with the artist Christabel MacGreevy.

Home is about the people, but possessions are also very powerful in making you feel comfortable and familiar”

The effect is of a lively and sumptuous artist’s sitting room that’s primed for fun. “Everyone who comes in says we need to throw a party,” says Ashby, who has plans to stage dinners catered by her younger sister Rose, the executive chef at Skye Gyngell’s Spring Restaurant. “I love hosting and setting the scene,” she adds. “But I’m a terrible cook.” Outside, in a triangular, tree-dotted terrace, Ashby hopes to invite a coffee van and florist, and to stage the occasional pop-up market.

In the same spirit of creative sociability, the interior will open with an exhibition of paintings by the South African siblings Mia and Erin Chaplin. Part of an ongoing artist-in-residence series, it marks the first time the sisters have displayed their energetic canvases side by side. It’s also a poignant nod to the designer’s own itinerant past: Ashby was born to a South African mother and an English father, and lived in Stellenbosch until she was 12, when the family emigrated to the South Devon village of Stoke Gabriel.

This was one of 14 house moves before Ashby graduated with an art history degree at Leeds University. A former fashion buyer for the department store Edgar’s, her mother would recreate her homeland wherever they went. “Home is about the people, but possessions are also very powerful in making you feel comfortable and familiar,” she says of her nomadic childhood. “For me, until the pictures are hung, it just doesn’t feel right.”

Immersing herself in the art books that lined her parent’s shelves, Ashby imagined owning the modern creations conjured by everyone from Brâncuși to Barbara Hepworth. It was their sculptural forms – and the dramatic landscape of her native South Africa – that set the foundations for her strong aesthetic. But it was the bustle of the nearby market town of Totnes that cemented her love of shopping. “It gave me quite a traditional idea of shopkeeping,” says Ashby, who spent her adolescence scouring market stalls and vintage stores for clothes and bric-à-brac. She still thrills at rummaging around the stationery department of The Conran Shop or exploring the eclectic offerings at Mouki Mou or the Willer Gallery in London. “I’ll always find something that catches my eye,” she says. “I know what I like so I don’t have to put much thought into it.”

But even Ashby experienced a modicum of doubt when it came to, what she terms, the “high growth moment” of exchanging on Blewcoat. She’d spent the past few years trying to secure a retail space in Marylebone’s Chiltern Street, close to the shop she conceived for her husband, the sharp-suited menswear designer Charlie Casely-Hayford. This was part of a dream to make their lives work more in tandem, but that wasn’t meant to be. Putting her setback aside, Ashby is realising her shopkeeping dreams on a far more epic scale, creating somewhere she believes will ignite not only her own imagination but that of all those who enter.