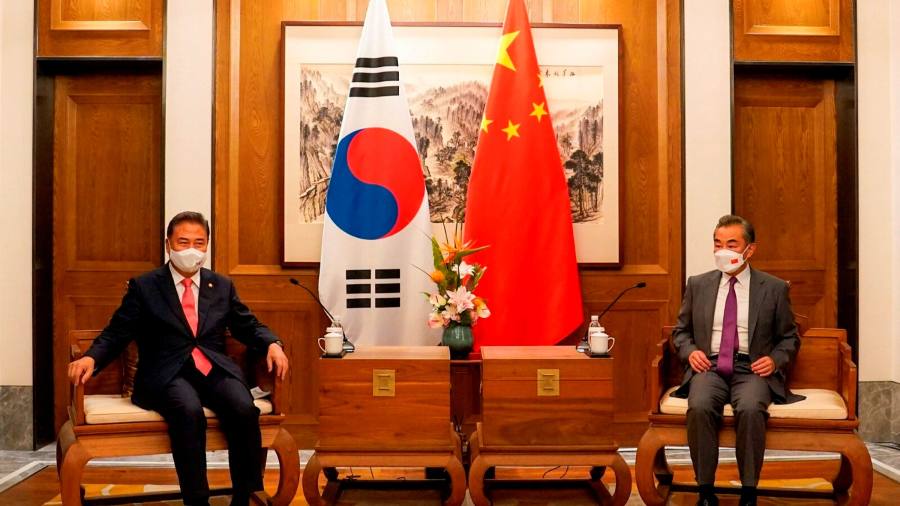 South Korea has contradicted China’s account of a discussion between their foreign ministers over a US missile defence system on the Korean peninsula, hinting at growing tensions between the two countries.

Chinese diplomats have publicly urged the administration of South Korean president Yoon Suk-yeol to stick to what Beijing regards as a series of commitments concerning the Thaad missile system, which is designed to counter threats from North Korea.

The “Three Nos” include Seoul agreeing not to add any new batteries to the Thaad system, not participating in a US missile defence network and not joining a trilateral military alliance with the US and Japan.

South Korea’s foreign minister Park Jin met his Chinese counterpart Wang Yi in Qingdao on Tuesday, after which a Chinese foreign ministry claimed Seoul had pledged to restrict Thaad’s operation — a commitment that would go further than the Three Nos.

“We would like to point out that the US deployment of Thaad to South Korea clearly harms China’s strategic security interests,” said spokesperson Wang Wenbin. “China has expressed concern to the South Korean side several times.”

But South Korean officials are adamant that no such commitment was made.

“The government maintains a consistent position that Thaad is a means of self-defence to protect the lives and safety of Korean nationals, and it is a matter of our sovereignty,” a presidential official said on Thursday.

“We also want to remind China that the former administration also had publicly said that the so-called Three Nos policy is neither a promise nor an agreement made to China,” the South Korean foreign ministry said.

The Three Nos were agreed by Moon Jae-in, Yoon’s predecessor, in an effort to end an unofficial Chinese economic blockade of South Korea after Seoul deployed the missile system in 2017.

Beijing is concerned that the new government, which is regarded as more hawkish on China and North Korea, sees things differently.

“The Chinese are very sensitive about the strengthening of military ties between South Korea, the US and Japan,” said Jaewoo Choo, head of the China centre at the Korea Research Institute for National Security think-tank.

Ahead of his inauguration in May, Yoon promised he would “dramatically strengthen” his nation’s defences against the rapidly developing nuclear forces of North Korea.

China’s foreign ministry last month publicly urged Seoul to stick to a Moon-era promise not to deploy any more missile interceptor systems, after Jin said the Three Nos were not part of any formal agreement between the countries.

The dispute comes against a backdrop of heightened tensions on the Korean peninsula, as South Korea and the US prepare for large-scale military drills that have been condemned by Pyongyang.

South Korean defence minister Lee Jong-sup warned on Thursday that Seoul and Washington would unleash a “high-intensity response” that “would demonstrate that their nuclear use will be futile”.

Despite the tensions with Beijing, analysts say successive Korean governments have tried to avoid provoking the country’s closest economic partner and a powerful stakeholder in the security of the Korean peninsula.

Yoon was accused of snubbing US House Speaker Nancy Pelosi last week when he claimed to be unable to meet her during the Korean leg of her tour to East Asia, which angered China after she visited Taiwan.