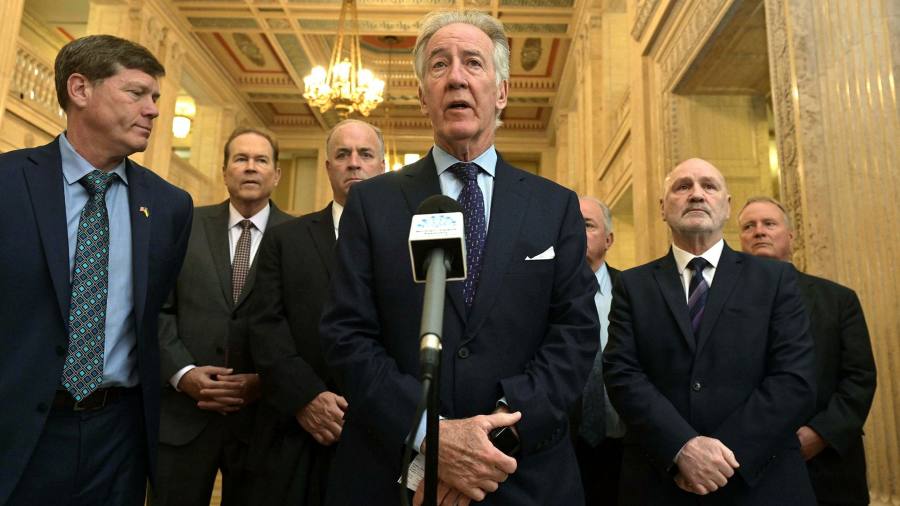 Northern Island’s Stormont assembly will be recalled next week in an effort to end political paralysis over post-Brexit trading arrangements for the region.

Legislators will meet on Monday after nationalist party Sinn Féin, which won this month’s elections, lodged the petition to vote for a new speaker at the regional assembly.

But Sir Jeffrey Donaldson, whose Democratic Unionist party is boycotting the legislature and power-sharing executive until its Brexit demands are met, dismissed the move as a “stunt”.

The DUP blocked the election of a speaker on May 13 and Donaldson has demanded definitive action from London to scrap customs checks on goods arriving from Britain before his party will re-enter local institutions.

The recall came as a visiting bipartisan US congressional delegation failed to defuse tensions over the post-Brexit arrangements for Northern Ireland in talks with officials in Belfast, Dublin, Brussels and London.

Donaldson slammed the mission, led by Richard Neal, a senior Democrat, as “terrible”, “undiplomatic” and displaying an “alarming ignorance of the concerns of unionists”.

Neal, who is chair of Congress’s powerful ways and means committee and close to President Joe Biden, failed to defuse the UK’s threat to rip up parts of the post-Brexit trade arrangements, known as the Northern Ireland Protocol. Such a move could trigger a trade war with the EU.

He said the top priority of the US — a co-guarantor of the 1998 Good Friday Agreement which ended three decades of conflict — was to protect peace in Northern Ireland. But London says the trading rules undermine the peace deal and are causing political instability.

Michelle O’Neill, Sinn Féin’s first minister-in-waiting after the party’s victory in regional elections earlier this month, said she “very much welcomed” Neal’s efforts. Her party accuses London of pandering to the DUP and says a paralysed Stormont cannot help people through the cost of living crisis.

But Neal outraged unionists by calling the row over Brexit arrangements for the region a “manufactured issue” that could be “ironed out quickly”. Unionists say Neal is not impartial and has republican sympathies.

The congressman also referred to unionists as “planters” — a reference to Britain’s 17th century push for English and Scottish protestants to settle in the northern part of Ireland. The Ulster Unionist party called the label “derogatory”.

In a statement after talks with local political leaders at Stormont on Thursday, Neal urged parties “to stay at the table and negotiate in good faith” and called the desire for a negotiated settlement a “common thread” of his meetings.

But in a visit to Northern Ireland on Wednesday, UK foreign secretary Liz Truss reiterated that London would take unilateral action at Westminster to “fix” the protocol if Brussels failed to make concessions.

“What we have been clear about is the protocol is causing political instability,” she said during a visit to a haulage company.

The protocol introduced customs checks on goods entering Northern Ireland from Britain — something that businesses say has led to costly red tape and that unionists say undermines their place within the UK.

Truss said the row was “solvable” and must not “drift”. She said she would present a bill within weeks unless Brussels agreed modifications, including establishing a check-free “green lane” for goods staying in Northern Ireland.

Unionists insist their concerns cannot be ignored because the need for cross-community consent was at the heart of the Good Friday Agreement. Most legislators at Stormont say the protocol must stay, albeit with some tweaks.

Neal has warned London that there can be no trade deal with the US if the UK rips up the protocol unilaterally. “This is an issue for the European Union and for the UK government to sift and sort out,” he said.