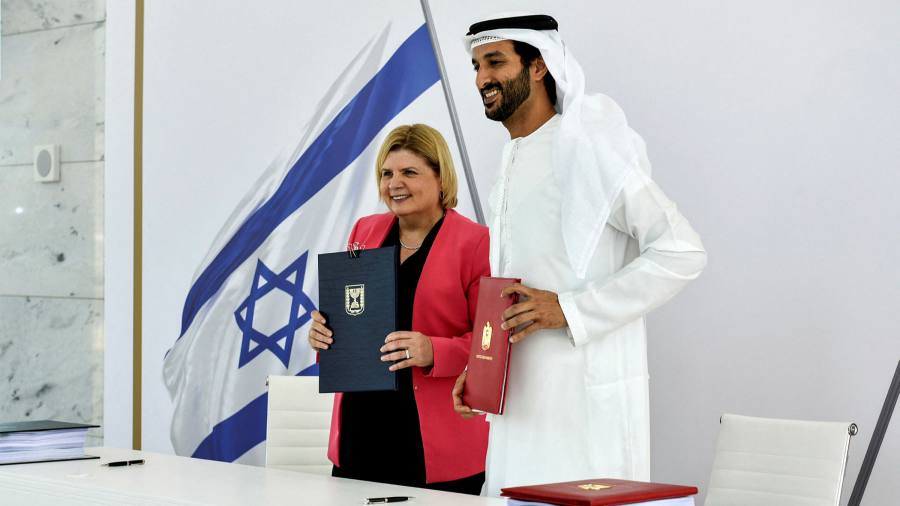 The United Arab Emirates has become the first Arab state to sign a full free trade deal with Israel, building on economic links that have grown since the two states established diplomatic ties in 2020.

The economy ministers of both states signed in Dubai on Tuesday the comprehensive economic partnership agreement, which aims to advance bilateral trade to more than $10bn within five years. From September 2020 to March 2022, non-oil trade exceeded $2.5bn. The deal will add $1.9bn to the UAE’s economy over the same timeframe, the UAE said in a statement on the official news agency.

The deal eliminates or reduces 96 per cent of tariffs on goods and services, creating opportunities in sectors such as energy, the environment and digital trade, the statement said.

The pact “with Israel will create a new paradigm for the region,” said Abdulla bin Touq, the UAE’s economy minister. “It will accelerate growth and underscores a shared belief that the only way to build resilient and sustainable economies in a complex world is by doing so together.”

The pact is the fastest free trade agreement to be signed in Israeli history, prime minister Naftali Bennett said in a tweet, describing it as the first of its scope to be signed between his country and an Arab nation.

Trade, tourism and investment have flourished since the signing of the so-called Abraham Accords during the Trump administration, which also included Bahrain and later Sudan and Morocco. Bilateral trade reached $1.06bn in the first quarter of this year, five times the previous-year period.

The UAE, alarmed at a perceived disengagement of the US from the Middle East, has been developing other allies to diversify its security arrangements. Rocket and drone attacks launched by Iran-allied Houthi rebels in Yemen against the capital Abu Dhabi in January brought into sharp relief the UAE’s vulnerability.

Like neighbouring Gulf powerhouse Saudi Arabia, which has covert relations but no formal ties with Israel, the UAE shares common concerns with the Jewish state around Iran’s nuclear programme and interference in the Arab world.

Long before the normalisation of ties, the UAE was engaged covertly with Israel on economic and security co-operation, including Emirati investment into Israeli technology firms.

Dorian Barak, co-founder of the UAE-Israel Business Council, a trade promotion body, said UAE-Israel trade was already on track to exceed $2bn this year. “Dubai is fast becoming a hub for Israeli companies that look to south Asia, the Middle East and the Far East as markets for their goods and services,” he said in a statement. He added that almost 1,000 Israeli companies would be working in and through the UAE by the end of this year. “It’s unprecedented,” he said.

Since normalisation, there has been a number of government-to-government deals, including co-operation over military drone technology and a plan to build solar energy and water desalination plants on either side of the Jordan river.

In the private sector, Israeli venture capital platform OurCrowd has opened an office in Abu Dhabi, where it is finalising plans for an artificial-intelligence research and development facility. “Given global supply chain shocks, this [the deal] could redraw global supply chains with the UAE-Israel link as a key component,” said Sabah al-Binali, executive chairman of OurCrowd Arabia.

The new-found partnership has endured periods of political tensions and violence between Israel and the Palestinians, such as last year’s Gaza war and the recent killing of Palestinian journalist Shireen Abu Akleh during an Israeli military operation in the occupied West Bank.