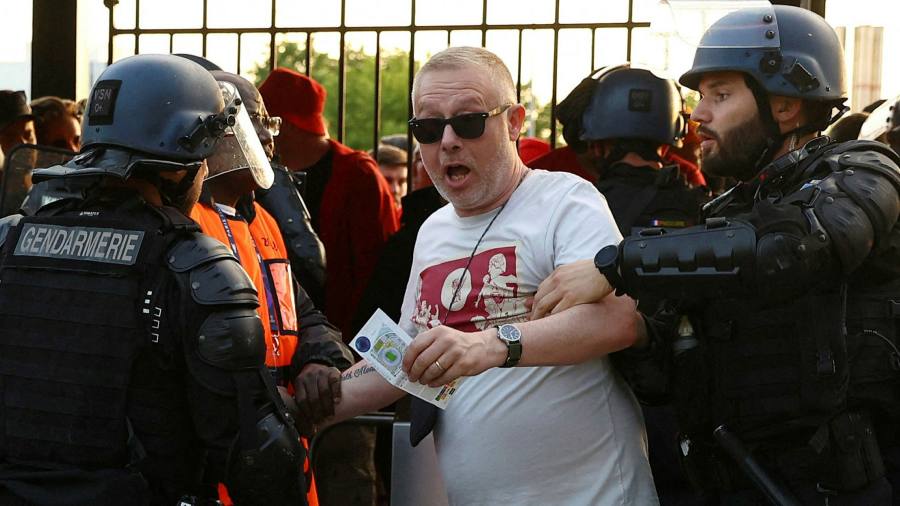 UK ministers have expressed concern at the “aggressive approach” taken by police towards British football fans who attended the Champions League final in Paris, after the French government and organiser Uefa accused them of misbehaving.

Saturday’s game between Liverpool and Real Madrid, held at the Stade de France, was delayed by 35 minutes as French authorities struggled to manage the crowd outside the stadium. Eyewitnesses described long queues of people waiting to get into the stadium and the use of tear gas and pepper spray by police.

Brandon Lewis, Northern Ireland secretary, described the scenes before the match, which Real Madrid won, as “concerning” and called for a detailed investigation.

“We’ve got to learn a little bit about what happened over there, get to the bottom of it,” he told Sky News on Sunday. “But it is concerning to see that people either didn’t get into the stadium or were treated in the way that some of them seem to have been treated, with a very aggressive approach.”

Uefa, European football’s governing body, has said that it will “review” the situation “urgently” with the French authorities. “In the lead-up to the game, the turnstiles at the Liverpool end became blocked by thousands of fans who had purchased fake tickets, which did not work in the turnstiles,” it said in a statement.

“This created a build-up of fans trying to get in. As a result, the kick-off was delayed by 35 minutes to allow as many fans as possible with genuine tickets to gain access. As numbers outside the stadium continued to build up after kick-off, the police dispersed them with tear gas and forced them away from the stadium.”

Gérald Darmanin, France’s interior minister, blamed “thousands” of British fans who allegedly attempted to break into the stadium without tickets or with falsified tickets. He thanked French police for their work; the interior ministry said 105 people were arrested on the night.

However, Chris Green, the assistant chief constable of Merseyside Police — whose force was deployed in Paris in an “observatory and advisory capacity” — said on Twitter that the “vast majority of fans behaved in an exemplary manner” and people had witnessed “distressing scenes”.

In a statement issued on Saturday evening, Liverpool said it was “hugely disappointed at the stadium entry issues and breakdown of the security perimeter that Liverpool fans faced . . . supporters should not have to experience the scenes we have witnessed tonight”. The club called for an official investigation.

Writing on Twitter on Sunday, sports minister Nigel Huddleston said the UK would be “working with the appropriate authorities to find out what happened and why”.

Menna Rawling, the UK’s ambassador to France, urged fans in need of consular support to contact the British embassy. “We need to establish the facts,” she added, saying she was “disturbed by events before the game” and welcomed Uefa’s pledge to investigate.

The French government and police also faced criticism from both ends of the domestic political spectrum.

Far-right leader Marine Le Pen called it a “humiliation” for France as the country prepares to host the 2024 summer Olympics. She accused the interior ministry of lying about who was responsible for the trouble, and blamed “traditional thugs from the suburbs” rather than British fans.

Jean-Luc Mélenchon, leader of a leftwing alliance in France’s upcoming parliamentary elections, said the events showed a “total failure” by the French police, whom he blamed for having aggravated the situation.