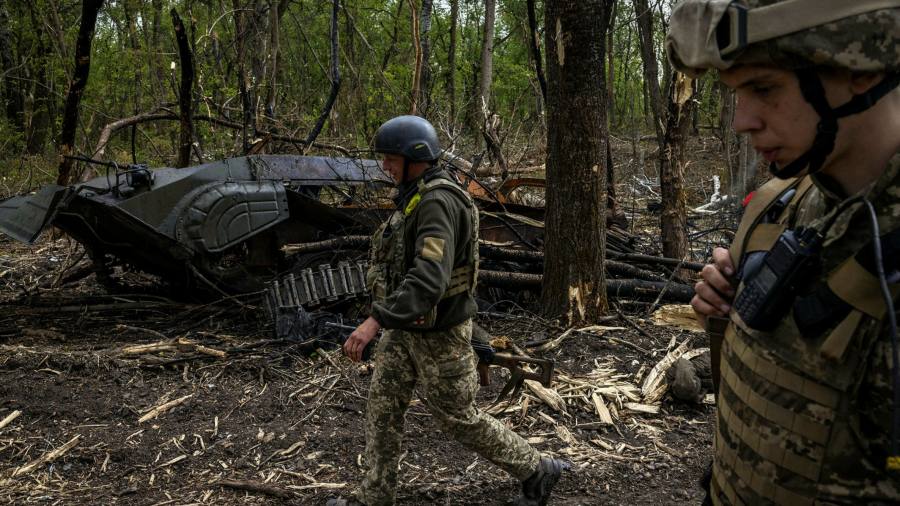 Ukraine said its forces were holding out against an intense Russian assault in the eastern Donbas region amid heavy artillery fire but implored the west to supply weapons to help Kyiv turn the tide of the war.

Serhiy Haidai, governor of the Luhansk region that makes up half of the Donbas, said on Sunday that Ukraine had driven Russian troops back from a highway, allowing Kyiv’s forces to supply the key city of Sievierodonetsk.

Russia is concentrating its forces on capturing Sievierodonetsk, the last big city in Luhansk still under Ukrainian control, as part of an offensive in the Donbas more than three months into President Vladimir Putin’s invasion.

The city is suffering the worst damage in the war since a Russian siege essentially destroyed the southern port city of Mariupol.

However, Russia’s advance has slowed despite what Ukrainian forces described as a tactical retreat under enormous artillery bombardments.

Russia’s forces have surrounded two-thirds of Sievierodonetsk in an attempt to encircle it but have yet to progress further than a hotel on its outskirts, where Ukrainian forces have inflicted heavy casualties, Haidai told Ukrainian television.

“They’re hiding-out there, but they can’t move forward,” he said.

The siege of Sievierodonetsk, where Ukraine’s president Volodymyr Zelensky says his forces are outnumbered 20 to one, marks a strategic shift by Moscow to overwhelm smaller pockets of resistance one at a time, after Russia’s forces were forced to retreat from central Ukraine and driven back in the Kharkiv border region north of the Donbas.

In a late-night address on Saturday, Zelensky said, “the situation is very complicated” in the region, “where the Russian army is trying to squeeze at least some result for themselves”. Ukraine’s president described conditions as “indescribably difficult”.

Ukraine still believes it can recapture the area once it gets more weapons supplies from the west and can outgun Russia in a long-range artillery contest.

“Every day we are bringing closer the time when our army will surpass the occupiers technologically and by firepower,” Zelensky said, adding that he expected “good news” on western supplies in the next week.

Ukraine said it had received Danish-made Harpoon anti-ship missiles and US howitzers but was awaiting approval for multiple rocket launchers, which would allow Kyiv to go much further in hitting Russia’s supply lines.

“It is hard to fight when you are attacked from a 70km distance and have nothing to fight back with,” presidential adviser Mykhailo Podolyak wrote on Twitter.

Peace talks between Russia and Ukraine have foundered after Putin hardened his desire to capture more territory and annex areas his forces have already captured in the south-east.

In an 80-minute phone call with France’s President Emmanuel Macron and Germany’s Chancellor Olaf Scholz on Saturday, Putin blamed Ukraine for the collapse of the talks and said Russia was open to more negotiations.

But Macron and Scholz told Putin a negotiated end to the war had to respect Ukraine’s sovereignty and territorial integrity.

Zelensky told Dutch television that Ukraine wanted to recapture the territory it has lost to Russia since the invasion, including most of Kherson and Zaporizhzhia in the south as well as parts of the Donbas, before resuming negotiations.

“I don’t think we can return all of our territory in full through military means,” including the Crimean peninsula and separatist-held areas of the Donbas Russia seized in 2014, he said. “If we decide to go that way, we will lose hundreds of thousands of people.”

Capturing the whole of Luhansk, which makes up half of the Donbas along with neighbouring Donetsk, would mark a propaganda coup for Putin, who has framed the war as an attempt to “liberate” Russian speakers there.

Russia rerouted most of its forces in the area when a series of humiliating battlefield defeats forced it to scale back its ambitions.

Analysts at the Washington-based Institute for the Study of War said any Russian victory in Luhansk would probably be pyrrhic.

“Putin is now hurling men and munitions at the last remaining major population center [ . . . ] as if taking it would win the war for the Kremlin. He is wrong,” they wrote.

The brutal war of attrition had reduced Russia’s personnel and firepower so much, they added, that “regardless of which side holds the city, the Russian offensive at the operational and strategic levels will probably have culminated, giving Ukraine the chance to restart its operational-level counteroffensives to push Russian forces back.”