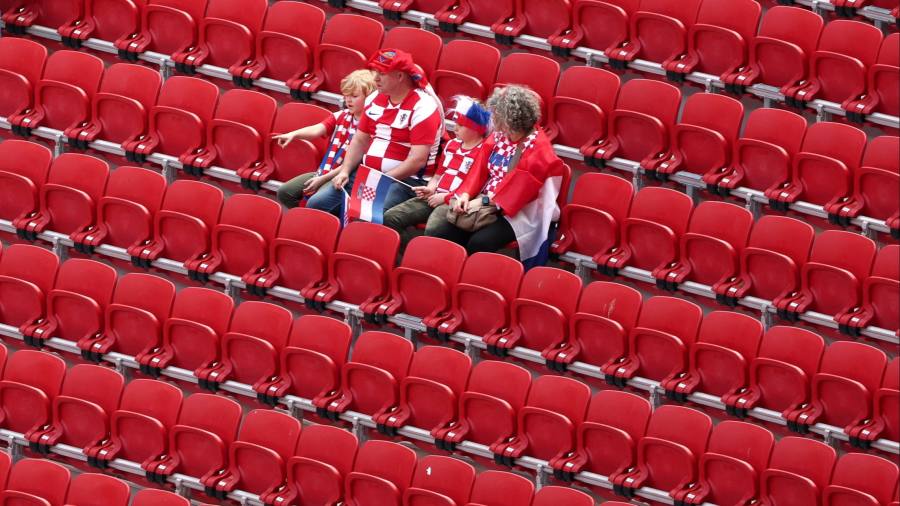 How big are Qatar’s World Cup stadiums? The answer is more complicated than you might think. The official guide to each of the eight venues — seven of them brand new — provides details of ground capacity.

Al Bayt, for example, is said to be able to hold 60,000 fans. So when the stadium announcer during the opening game hailed the turnout — 67, 372 — some started to scratch their heads. The trend continued the next day, with Senegal vs Netherlands apparently attracting 41, 721 compared to a published maximum of 40,000 at Al Thumama stadium.

So what is going on? Organisers say that media and sponsors needed less space than anticipated. The figures in the official guide are a minimum number of seats on offer once areas set aside for journalists and executives have been taken away from the true total. So capacities have gone up because the media and sponsors have not taken up as many seats as expected.

Fifa has since updated official capacity figures, with each venue’s total increasing by more than 10 per cent.

One question Fifa and Qatari organisers have yet to answer is why the official attendance figures jar so much with facts on the ground: there have been thousands of empty seats in some of the early games here. Empty seats were a feature of past World Cups — Russia had them too as tickets went unsold. But this time, the official attendance figures are higher than the visual evidence, so unused tickets, rather than unsold tickets, appear to be the issue.

In Qatar, some of the no-shows will be sponsors who have decided to skip. Tickets will also be in the hands of local Qataris, some of whom may simply have decided to ignore the football after their side’s opening-day defeat. Issues with the ticketing system have left many trapped outside stadiums, and also made it harder for those trying to resell or transfer unwanted tickets.

Taken together, it all points to a general sense of damped enthusiasm, at least in the tournament’s opening week. But Fifa need not worry. On Sunday, football’s governing body announced that its World Cup revenue from Qatar 2022 would be $7.5bn — up more than $1bn compared to Russia 2018 — thanks in large part to lucrative sponsorship deals with Qatari companies. Paying up is more important than showing up.

One to watch: A first look at Neymar and the tournament favourites

Neymar comes to Doha with high expectations. The 30-year-old superstar is spearheading a Brazil team brimming with talent that starts the World Cup as favourites and Fifa’s top-ranked side.

But the most fouled player in Europe’s leading leagues will not just be seeking success — like Brazil forwards of old, he also wants to entertain, to dazzle. Against Serbia on Thursday evening, we will finally see if Neymar — and Brazil — can live up to the pre-tournament hype.

Wednesday’s highlight: Sauntering Spain put themselves in the mix

The chatter about potential World Cup winners before this week had been largely focused on three teams: Brazil, Argentina and France. On Wednesday night, Spain forced themselves on to the list.

Luis Enrique’s side cantered past Costa Rica, playing fluid, confident football. They scored seven, and could have had more, without ever getting out of third gear. In the final minutes, the game almost looked like a practice match. Costa Rica never got a sniff of goal.

Spain will be formidable opponents in Qatar.