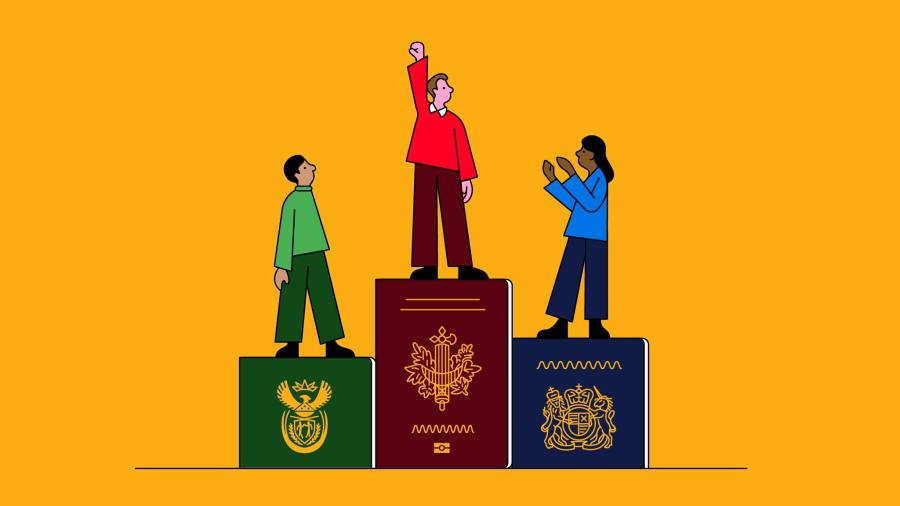 And in the midst of it all, I became French. “I have the pleasure to inform you that you have acquired French citizenship,” said the letter from the nice man at the ministry of interior. Watching Ukrainians fleeing west rubs in the simple truth: your passport is your fate.

My family of rootless cosmopolitans has experience in this business. In the previous four generations, we’d successively upgraded from subjects of the Russian tsar to South Africans to — first prize, or so we thought at the time — Britons. I moved from London to Paris in 2002 with the entitled insouciance of a privileged nationality. I was British, and European, and could therefore go almost wherever I liked.

My poor wife was a mere American, so I watched pityingly as she jumped the endless hurdles to become French. But by the time she got there in 2017, we’d swapped places: Brexit had downgraded my passport and I was no longer legally European.

For the next few years my hobby became collecting documents for my naturalisation dossier. Attaining Frenchness is the secular equivalent of the Buddhist state of bodhi, or “enlightenment”, so France deliberately makes it hard. I met all kinds of fellow questors.

After my language exam, I got chatting with an Algerian fast-food chef and a Tunisian cleaner on the pavement outside and briefed them on the test. I tried to reassure them: “You both speak fluent French, you’ll be fine.” The chef replied gloomily, “In the restaurant, the lads and I speak Arabic all day,” and the cleaner said, “I couldn’t do the grammar even in Arabic at school.” I hope they made it.

As a cosmopolitan, I believe in having multiple belongings, and after all these years, I belong in France too

In summer 2020, in a street near Notre-Dame, a bureaucrat interviewed me to check, in essence, whether I was an Islamic fundamentalist. At her request I delivered a short lecture on Charles de Gaulle, cannily emphasising the upsides, until after a few minutes her eyes glazed over and she cut me off. She then demanded a recent version of my daughter’s birth certificate, in case the facts of the birth had changed since I’d last submitted it.

Next, coincidentally on the fifth anniversary of Britain’s vote to leave the EU, I was called into the ministry of interior. Two civil servants led me past practice rooms for responding to terror attacks and other disasters to a basement, where they interrogated me for an hour, apologising self-consciously for “l’administration française”.

The focus of their questions: was I a spy? Had I ever been contacted by the intelligence services of any country? This was a sore point: I still feel offended that Britain’s MI6 never tried to recruit me at university, even though I was studying German, a big espionage language of the day, whereas the spooks did tap up a posher fellow student whose only languages were Latin and ancient Greek. I presume that everyone, when asked, “Are you a spy?” replies “No,” so I struggled to make my denial sound convincing. Before leaving, I asked, “Will your suspicions affect my citizenship application?” “Not at all,” they reassured me.

Indeed, I’ve now become French, though the noisiest candidates running for the French presidency don’t seem to believe that’s possible. There is a tension between the republican idea of Frenchness — you can become French if you have the right values — and the blood-and-soil far-right notion plugged by Eric Zemmour and even Valérie Pécresse, who has bashed “paper French people” as opposed to real ones.

As a cosmopolitan, I believe in having multiple belongings, and after all these years, I belong in France too. But I know that my particular attachments are random, not better than anyone else’s. Nativistic nationalism strikes us cosmopolitans as absurd: why believe that the place where you happened to be born is superior? Yet lots of people do believe this, including Vladimir Putin. More than feeling French, I feel European.

In passport terms, I’m blessed. I was born with a lucky citizenship, and have now upgraded to the best of the 200 or so on earth, as judged by Kälin and Kochenov’s Quality of Nationality index. And a lucky passport generally means a lucky life. “Around 60 per cent of our lifetime income is determined by country of citizenship,” writes the economist Branko Milanovic. “French and Malian citizens can be equally educated, experienced, and hard-working, but their wages will differ by a factor of 5 to 1, or even more, simply because one of them works in a rich and another in a poor country.”

Now Russian passports are effectively becoming junk bonds, as some EU countries deny Russians visas, while Ukrainian passports have, perversely, soared in value as the EU gives Ukrainians residence for up to three years. Many children fleeing bombed cities may end up with burgundy European passports — the world’s best, at least in our generation.