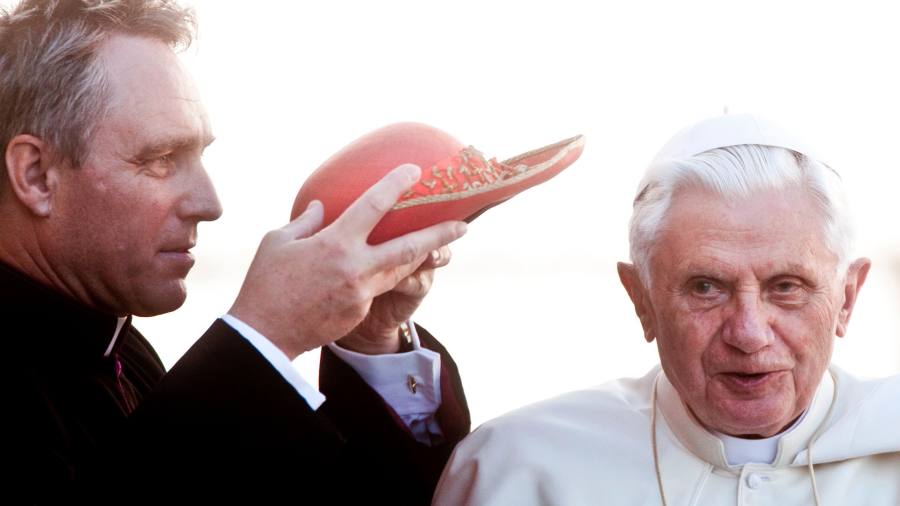 In a season of tell-all memoirs, the most unexpected book of revelations has just emerged from the Vatican: from Archbishop Georg Gänswein, the powerful right-hand man of the late Pope emeritus Benedict XVI.

Gänswein, 66, Benedict’s private secretary from 2003 until his recent death, has long cut a striking figure in the Holy See, given the chiselled features and limpid blue eyes that prompted Italian media to dub him “Gorgeous George”.

Fashion designer Donatella Versace cited Gänswein’s “elegance” as inspiration for her 2007 spring men’s collection, homage, she said, to an “austere, severe and ethical man”. In January 2013, Vanity Fair’s Italian edition put him on its cover proclaiming “to be beautiful is not a sin”, and calling him “the George Clooney of St Peter’s”.

Yet Gänswein’s new book, Nothing But the Truth: My Life Beside Benedict XVI, is anything but pretty. Its publication was announced while the late pope emeritus still lay in state in St Peter’s then landed in Italian bookstores a week after the funeral.

Touted as a peek inside “the real Vatican world”, it is Gänswein’s take on the simmering tensions of the past decade between the reigning and retired popes. In part, the book is a settling of scores by a devoted Benedict protégé, who wept openly when his retired mentor vacated the papal apartments, then struggled to win the trust of Francis, who sidelined him.

“The golden rule of the British monarchy — never complain, never explain — should be followed by church leaders,” says Massimo Faggioli, theology professor at Villanova University. “But now the Vatican lives in the 24/7 news cycle. All these players have become media savvy.”

Yet Gänswein’s book is also part of a bitter doctrinal struggle and a noisy, increasingly public campaign by clerical conservatives to undermine Pope Francis. That campaign is getting nastier as Francis, 86, presses ahead with an extraordinary global consultation of the faithful — the synod — on the future of Catholicism, a process traditionalists fear will undermine core teachings on sensitive issues of personal morality and erode clerical authority.

“The enemies of Francis now would like to stop the synod,” Faggioli says. “They think it is giving voice to those who should not have a voice.”

After his shock 2013 abdication, Benedict retreated to a life of prayer, vowing to not undermine his successor. The two men maintained respectful relations as Francis set out to reform and revitalise a church shaken by sex abuse scandals and struggling with the modern world.

Yet Benedict became a rallying point for traditionalists disenchanted with Francis’s approach. Gänswein — in a dual role working directly for both — was at the centre of palace intrigue.

In 2020, Gänswein was stripped of duties in Francis’s papal household, after a furore over a book on priestly celibacy — allegedly co-authored by Benedict — was published just as Francis was considering the ordination of married men in the remote Amazon to cope with an acute priest shortage.

Gänswein’s memoir is imbued with grievance: from his dismay at Francis’s decision to spurn the lavish papal apartments and live in the Vatican guest house, to his own disappointment at being denied the Renaissance-era frescoed quarters allotted to previous heads of the papal household.

A more vicious blow was delivered by Cardinal George Pell, 81, who died this month, and has been posthumously revealed as the author of an anonymous memo circulated last year that slammed Francis’s papacy as “a catastrophe”. The memo argued the first task of any new pope would be to “restore doctrinal clarity in faith and morals”.

Pell was poised to go public with his fierce dissent. In an article published in The Spectator the day after he died, Pell called the synod “a toxic nightmare”, its deliberations marred by “neo-Marxist jargon” and “hostile” to fundamental church tenets.

But Faggioli tells me such attacks could embolden a pontiff — whose cautious approach to reforms has frustrated more progressive Catholics — and compel him to prove “he is not a lame duck”. Francis, Faggioli says, “has always, always followed the course he thought was good for the church”.