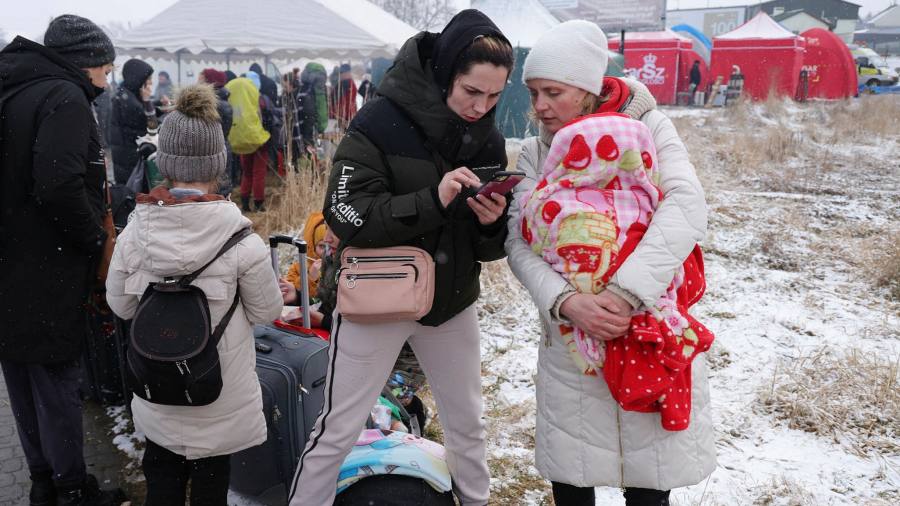 According to a viral post, liked and shared thousands of times on the social media platform, Mikael had been trained by the Ukrainian army to detect lasers emanating from enemy sniper rifles, helping to reveal their location. Four Russian snipers had been exposed and killed thanks to the green-eyed feline known as the “panther of Kharkiv”, the post said.

Fact checkers pointed out that, of course, the post was nonsense. It is highly unusual for snipers to beam a red laser on to their targets. The photo of the cat in the arms of a soldier was first posted in 2018.

Yet the tale is one of dozens of feel-good narratives that have spread with ferocious virality on social media feeds in recent days. Flooding mine, there’s the grandmother who allegedly wiped out a Russian drone from her balcony with a jar of cucumbers. The Ukrainian soldiers of Snake Island in the Black Sea, who told advancing Russians to go f*** themselves before being slaughtered as martyrs. The jet fighter pilot known as the Ghost of Kyiv who, we are told by the Ukrainian government, wreaks lonely havoc on Russian air operations.

These tales — centred around an evocative hero offering defiance or hope against the odds — are welcome for those doom-scrolling through the daily horrors of war. Social media users caught up in the conflict are becoming citizen journalists, while those watching helplessly at home are quick to share their posts to show solidarity (or, a cynic might add, to virtue signal). The result is an emotionally charged torrent of “viral moments” rising up our feeds.

This morale-boosting blend of myth, exaggeration and fact marks a new frontier in the information wars. Existing modes of misinformation, disinformation or propaganda do not capture the status quo: a grassroots, participatory dynamic whereby users both observe and then riff on content that may contain both kernels of truth and fictitious elements.

“This is about narrative creation,” writes Renee DiResta, research manager of the Stanford Internet Observatory. “Instead of government messaging, bureaucrats sitting around in a basement room debating slogans and rolling them out, the testing . . . happens in real time, and the target audiences themselves . . . are part of a co-creation process. ”

For those involved outside Ukraine, “it can feel like serving a role as an information warrior”, Emerson Brooking, senior fellow at the Digital Forensic Research Lab of the Atlantic Council, tells me. And for those inside the country in harm’s way: “Western attention is a very valuable asset.”

There are risks here. One is that nefarious actors seek to capitalise on the rush of virtual goodwill, sensationalising content to scam users out of money, boost advertising or simply sow more division.

Take Mikael the cat. Perhaps he is a parody, or maybe something darker: Twitter users noticed that a patch on the sleeve of the soldier holding him appeared to be a neo-Nazi symbol.

It is also important to be aware that the spread of misinformation of any kind can itself be manipulated for political purposes. Former US president Donald Trump co-opted the phrase “fake news” in order to discredit the mainstream media. Russia has created its own fake news law to stifle independent journalism. Whatever the motive, mythmaking provides fodder to those who wish to weaponise post-truth politics, adding fuel to their grievances.

Meanwhile, the heartwarming stories can lead us to believe the war is playing out somewhat differently to the reality. “If you are bombarded for days on end with actual footage of Ukrainian grandmothers walking up to tanks, that does incite a sense of pride in Ukrainians,” says Andras Toth-Czifra, senior analyst at Flashpoint, who specialises in disinformation. “But it may not give you a sense of how precarious the situation is.” A sense of triumphalism could affect our responses or delay our sense of urgency in providing aid.

Social media platforms will have to weigh up how they handle these viral narratives and whether to label them as misinformation, or debunk them. In the meantime, as always, check before you click.