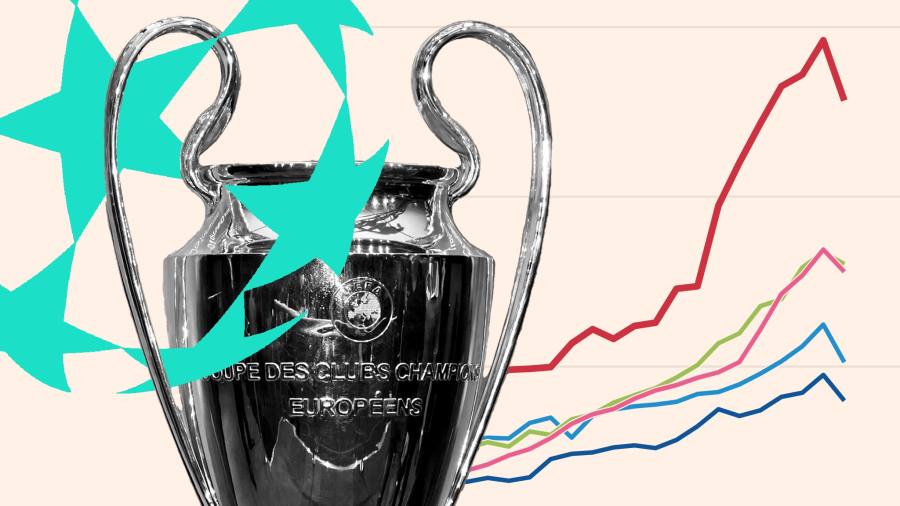 Saturday’s Champions League final between Liverpool and Real Madrid is the fourth in five years with at least one English participant. Two of those have been all-English affairs and, had it not been for odds-defying comebacks from Madrid, this could easily have been the third.

For one nation’s football clubs to dominate the continent’s blue riband event is hardly unheard of — Spanish sides lifted the trophy for five successive years before Liverpool’s 2019 victory. But there is something ominous about this era compared with other recent national hegemonies.

When England’s top teams last sat astride the continent in 2007-08, Premier League clubs’ total revenues were £1bn higher than those of Spain’s La Liga, according to the Deloitte annual review of football finance. Today the gap is £2.4bn, and growing. This season the league booked £3.1bn for television rights, compared with La Liga’s £1.8bn. Next season La Liga’s package will shrink to £1.6bn, while the Premier League’s will rise to £3.4bn, according to Football Benchmark analysis.

On top of this, Chelsea’s sale to US investors and the October acquisition of Newcastle United by Saudi Arabia’s sovereign wealth fund mean that almost every club in the English top tier next season will be owned by a multibillionaire, some of whom have shown little concern for turning a profit and will happily burn tens of millions on talent.

English clubs are not the only ones embracing the “sports washing” industry — Paris Saint-Germain’s commercial revenues increased by an incredible 750 per cent in the three years after their sale to the Qatari state. The concentration of money and talent among a shrinking pool of clubs extends beyond these shores.

In the early 1990s the European Cup was far more cosmopolitan, with clubs from 13 countries reaching the semi-finals. In the past five years, three-quarters of semi-finalists came from just five urban western European regions: Paris, Madrid, Munich, London and the north-west of England.

The dynamic playing out between countries has created uneven playing fields within them. Adjusted for changes in ranking methodology, in 1975 30 points separated first from last in the English top tier, and the difference between the best and worst goal difference was 52. This season, the former is 72 and goal difference 134.

The risk is that England’s elite not only dominate domestically but that the Champions League in effective becomes the nation’s fourth piece of major silverware after the Premier League, FA Cup and League Cup. The European Super League may have been a bad idea, but the problem of English financial dominance it sought to address is very real.