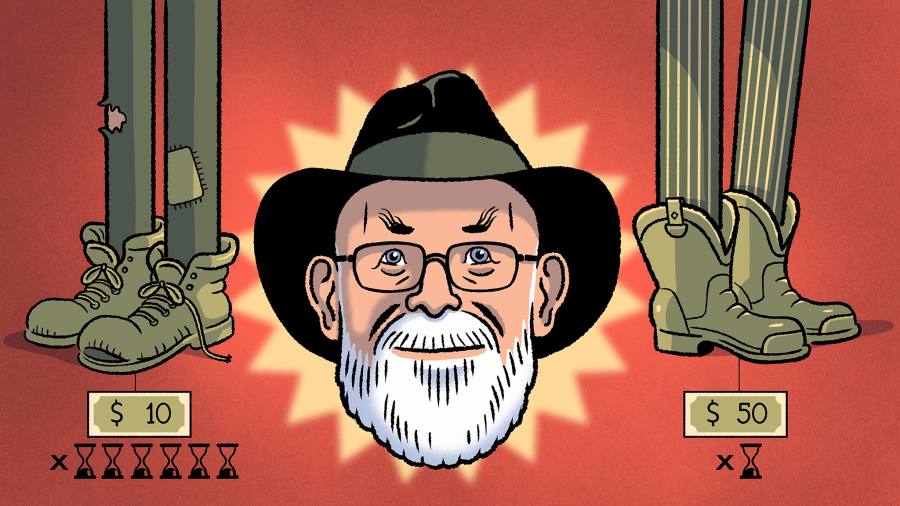 “In the Ramtop village, where they dance the real Morris dance, for example, they believe that no one is finally dead until the ripples they cause in the world die away, until the clock he wound up winds down — until the wine she made has finished its ferment, until the crop they planted is harvested. The span of someone’s life, they say, is only the core of their actual existence.”

The above is just one of the many examples of the wisdom that lurks beneath the whimsy in the writings of the late Terry Pratchett. Last week saw one more of those ripples when the cook and social campaigner Jack Monroe referenced a passage from one of his Discworld books while explaining that traditional measures of inflation do not show how price rises disproportionately hit the poorest.

Vimes Boots theory (named for a major character) demonstrates the choices denied to those on a low income that could save them money. Those who can afford the $50 for a high-quality pair of working boots may get more than a decade’s use from them, while those who cannot will buy a $10 pair that lasts little more than a year. Hence the poor will spend $100 over a decade and still have wet feet, while the wealthy spend half that. Vimes theory is that the rich were rich because “they managed to spend less money”. The Pratchett estate has now given Monroe the use of the name for a new food poverty index.

She performed a second service by introducing important people to the wisdom of Pratchett. That this should be necessary for so successful a writer — by the time of his death his work had sold 70mn copies and been translated into 30 languages — may seem odd but Pratchett is far less well read among what might be called the ruling elite than might be expected. I know so many clever and successful people who have never read him. And this is a shame, because as well as being funny and humane, he was an astute social commentator.

One reason people do not read him is that those who take themselves too seriously believe it a waste of their intellect to bother with comic fantasy fiction. They may know he’s amusing, but they are serious and there’s a new Piketty to get through, don’t you know. Yet it is Pratchett, not Piketty, who tells us that, “If you had enough money, you could hardly commit crimes at all. You just perpetrated amusing little peccadilloes.” His work is social commentary disguised as fantasy.

And the consistency of his observation on the human condition is remarkable. Pratchett notes that “real stupidity beats artificial intelligence every time”; that “those seeking the truth [are] infinitely to be preferred to the presence of those who think they have found it”, and that “history was full of the bones of good men who’d followed bad orders in the hope that they could soften the blow”. He also records that a marriage is made up of “two people who are prepared to swear that only the other one snores”.

His police chief, Vimes, observes that what the innocent should fear most is anyone telling them they have nothing to fear, while his benign tyrant, Vetinari, tells us that “no practical definition of freedom would be complete without the freedom to take the consequences. Indeed, it is the freedom upon which all the others are based.” The scheming Vetinari should be required reading for all students of practical politics.

Another reason for the rejection is that there are 41 Discworld books and the first is not that great. Happily, it is not necessary to read them in order of publication. Once he got into his stride, Pratchett created subseries — Witches, the City Watch, the Industrial Revolution and, my own favourite, the Death novels, following the travails of a rather sympathetic grim reaper. A better way into Pratchett is to pick one of these strands and start there.

As with many great works, the narrative and fantasy are rarely the point. The value is in Pratchett’s keen eye for religion, politics and the structures of society. Pick almost any issue, from class structure to prejudice, from industry to the media: Pratchett’s satirical sword is merciless. Yes, there are trolls, witches and a magical university but behind the exuberant silliness, his books are really about power politics, the role of the individual and how the structure of a society evolves. This is Dickens but set in a fantasy realm.

Pratchett thus combines the social commentary of Boz, the machinations of Machiavelli, the political theory of Mill and the philosophy of Arendt, and all that with wizards, jokes and a grim reaper who could “murder a curry”. Wisdom, humanity and serious social commentary. That sounds like something serious people could do with taking seriously.