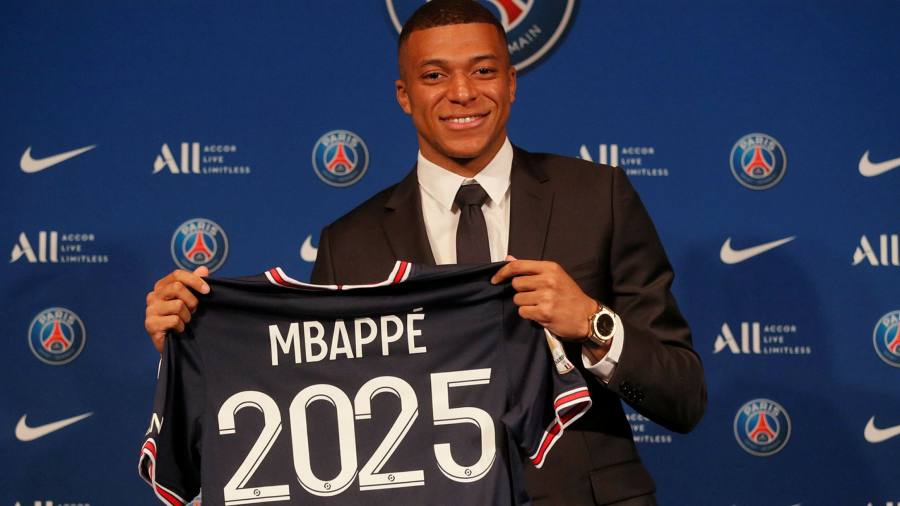 Football star Kylian Mbappé is so important to France that not one but two presidents sought to convince him not to abandon Paris Saint-Germain for Real Madrid.

The 23-year-old striker, who helped the country win the World Cup in 2018, admitted to the high-level lobbying when asked in a primetime television interview what current president Emmanuel Macron and a former one, Nicolas Sarkozy, said to him as he weighed the blockbuster transfer.

“They strongly advised me to stay in my country and to keep writing the story of PSG, but it was my decision above all else and I’m happy to have made it,” he said as nearly 7mn viewers tuned in to TF1 on Monday, far more than watched the new prime minister Élisabeth Borne on Friday.

It was an answer delivered with the poise of a politician by a player with a gift not only for scoring goals but for doing all the things expected of modern sports stars — from projecting a positive image of the club to looking immaculate in a Dior suit made by sponsor LVMH, all while deftly navigating the culture wars that surround the beautiful game.

But the patriotic gloss that Mbappé sought to put on the end of the year-long will-he-won’t-he saga failed to cover up some harsh truths for both PSG and the French league.

Winning the Champions League has remained out of reach despite the Qatari state, which owns the club, spending its oil and gas riches on players such as Lionel Messi and Neymar since buying the club in 2011. The Qataris will be relieved to have hung on to Mbappé in the year they are due to host the World Cup, which kicks off in Doha in November.

But the meticulously orchestrated celebration of the player’s re-signing at Parc des Princes this week contrasted with the way some fans boycotted the title-winning match a month ago to indicate their displeasure with yet another premature Champions League exit.

Plus France’s Ligue 1 risks being permanently relegated to the underclass of European football — not only financially, but also in terms of quality of play. Many of the matches are dull in a competition that is so lopsided that PSG has won it in eight of the past ten years.

The league aims to remedy this with a new €1.5bn deal with private equity firm CVC, which will bring a much-needed cash infusion to clubs still heavily indebted from the Covid-19 shock, but its benefits could take years to be felt.

That deal went through only once the blessing of Macron and the French parliament was secured in yet another sign of how football and politics are intertwined. All of which means that Mbappé’s potential move to Madrid was never going to be interpreted as the personal choice of a young man who might want the experience of testing his skills abroad in a stronger league. On the contrary, it plugs directly into the ever-present narrative that underpins public life in France: the fear of déclassement or decline in everything from geopolitics to cinema. For many in France Mbappé staying amounts to a vote of confidence.

France’s idea of itself has often been linked to the sport and its stars. In 1998 the racially diverse team that won France’s first ever World Cup spawned hopes that sport could heal divisions in society. But such optimism was misplaced. Today, France is still fighting over whether Muslim women players should be allowed to wear headscarves while they play in amateur or professional competitions. Far-right politician Jordan Bardella may have been trying to compliment Mbappé by calling him a “model of assimilation” this week, but the remark fell flat given that the player was born in France and is French. (His father is from Cameroon and his French mother has parents who immigrated from Algeria.)

When Mbappé is on the pitch, such concerns fade. I was lucky enough to be in the stands when PSG played Real Madrid in February. It was a tense, goalless match until the last minute of stoppage time, when Mbappé received a pass from Neymar, slipped between two defenders, and slotted a low, hard shot into the net.

The stadium exploded with relief as many people probably thought the same thing: what would we do without him?