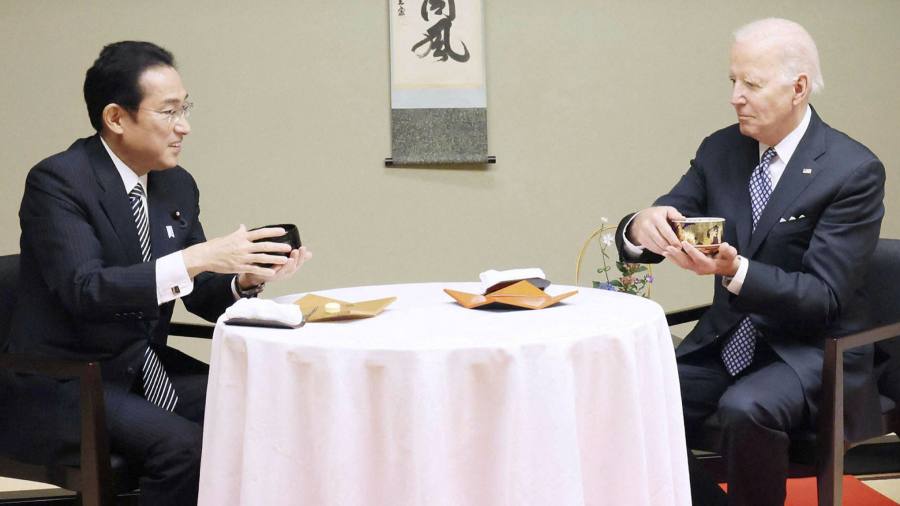 Japanese prime minister Fumio Kishida’s reception for US president Joe Biden last week offered little in the way of the personalised diplomacy that was the hallmark of Shinzo Abe, his predecessor but one.

Whereas the long-serving Abe posed for golf course selfies with former president Donald Trump and held discussions at a traditional hot spring resort with Russian president Vladimir Putin, Kishida’s first hosting of the US president was notably lower-key.

Out of the spotlight, however, diplomats say the Japanese leader has been surprisingly bold and decisive since taking office in October, rolling out tough sanctions against Russia following its invasion of Ukraine. Japan also helped to convince reluctant south-east Asian countries to back a new US economic initiative in the Indo-Pacific region, allowing Biden to claim a diplomatic success.

His action appears to be paying off with the public. Against initial fears that Japan would return to revolving-door leadership following Abe — whose immediate successor, Yoshihide Suga, lasted barely a year — Kishida seems more established in office. His approval rating reached more than 60 per cent in a recent opinion poll, buoyed by his meeting with Biden.

“He’s the type of leader who is extremely attuned to what the general public wants and is surprisingly flexible,” said Mieko Nakabayashi, a professor at Waseda university in Tokyo.

Despite being known for his dovish stance, Kishida has been swift to latch on to voters’ gradual shift towards favouring an increase in the country’s defence capabilities, after Russia’s invasion raised fears that China could make a similar move on Taiwan.

Reflecting the sense of alarm, Kishida warned on a recent trip to the UK that “Ukraine might be East Asia tomorrow”. Citing China’s military rise and North Korea’s expanding nuclear programme, he has also committed to boosting the country’s defence spending.

The real test is how Kishida can build on his popularity to translate these commitments into concrete action. “The key question is how fast and how much Japan will expand its defence capabilities,” said Kenichiro Sasae, a former Japanese ambassador to Washington who heads the Japan Institute of International Affairs. If Kishida delivers, he could fundamentally reshape Japan’s defence policy and security framework in the Asia-Pacific region.

Following the start of war in Ukraine, Kishida ended Tokyo’s decade-long courtship of Moscow, which was sustained by the slim hope of clinching a bilateral peace treaty that would return part of the disputed Kuril Islands to Japan.

Tokyo initially struggled to keep up with western sanctions and reduce its reliance on Russian energy because of its reluctance to sell stakes in oil and LNG projects on the Russian island of Sakhalin. But US officials soon stopped prodding the Kishida administration as it started acting on its own initiative, resulting in sanctions affecting more than 700 Russians.

Then as Biden visited Tokyo to reaffirm ties in Asia, Kishida declared Japan would “substantially increase” the defence budget and consider first-strike capabilities against enemy bases. Analysts said that by making such a public commitment to the US, Kishida was making it harder for Japan to backtrack and giving himself more chance to push back at domestic political opponents who are more hostile to reinforcing deterrence capabilities.

If his high approval ratings can be maintained, Kishida is expected to win a comfortable majority at the Upper House election in July. That would give him three years without another election test.

But that will only be his starting point. He faces the challenge of kick-starting an economy that has been slow to recover from Covid-19 and is under fresh pressure from soaring commodity prices. Without an economic rebound, it will be harder for Kishida to fight fiscal hawks who are against boosting the defence budget closer to 2 per cent of gross domestic product.

Even Abe did not come close to fulfilling his ambition to change Japan’s pacifist constitution after nearly eight years as prime minister. Still, the geopolitical landscape and shifting public attitudes may give the more moderate Kishida a bigger chance to make a lasting impact on Japan’s defence capabilities.