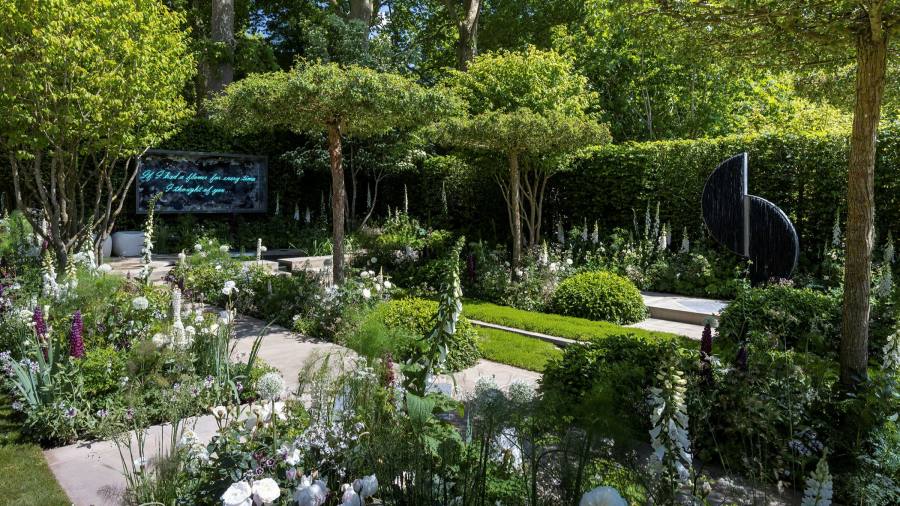 Chelsea Flower Show ends its five-day public run this Saturday evening. Only eight months ago it unlocked for its 2021 display. It is back on its traditional May date, but it is evolving and changing. I began by thinking that this week’s growers and nursery exhibitors had less to offer than usual, but I changed my mind on a second foray through the Great Pavilion: during it I found old favourites I had missed.

Outdoors, I began by thinking the opposite, that the planting of the outdoor gardens was more varied and thoughtful than in recent years. That view still stands.

Here are my personal prizes, ranked before the judges announced their medals. The results of the competition to be Chelsea Plant of the Year usually baffle me. My clear winner is the new low-growing mid-blue Salvia sylvestris A Little Bit. It is a fine prospect for a pot or tub on a terrace or balcony. Its spikes of flower are about a foot and a half high, more compact than other hardy salvias. As their colour is a blue-purple, it is very appealing.

Its online suppliers include Thompson and Morgan (thompson-morgan.com) who are offering young plants in 9cm pots, delivered by the end of August, for £12.99 each, a high level of pricing for a salvia. They even claim it will flower from June to October, but surely it will not do so continuously.

I will wait until next year when A Little Bit’s price is surely one that will fall. Neither this year nor next year will I use a dark-purple-leaved succulent, but lo and behold, a new one, Semponium Destiny, has won the title of Plant of the Year from the Chelsea judges. Yet again they have fallen for leaves with fancy colouring, whereas most of us prefer 50 shades of green.

I thought this relation of a houseleek was a visual pain, except in a dense semi-tropical planting in a container. Surreal Succulents from Cornwall put it in for the title. The judges picked a rose-pink variety of thrift, Armeria pseudarmeria Dreamland, as the runner-up, presumably because it is a breakthrough offering seven months of flower. A week of it is more than enough for my eye.

Chelsea’s Plants of the Year seldom take off subsequently with the public. Outdoors, designers’ gardens make more of an impact, especially now that the show enjoys 15 hours of coverage on BBC television. My clear winner here is the garden for the Royal National Lifeboat Institution, the one that best combines a pleasing ground plan with especially well-chosen planting. Here at least the judges agree, giving a gold medal.

The designer, Chris Beardshaw, is no stranger to success at Chelsea, but this garden is his best. His curving pathway through the design is intended to evoke the slipstream of a lifeboat as it cuts its way through the waves but even those who miss this allusion will enjoy his planting’s range of shapes and colour.

Big plants of grey-green Melianthus major make a novel background for one boundary, while his combinations of pale irises, upright nepetas and graceful white gillenias are very charming. Thick clumps of fennel add a feathery texture and the main trees include a pine, used in boat building, and a disease-resistant elm, Ulmus parvifolia. I was especially impressed by the height and full form of the main planting, little of which was routine Chelsea in-fill.

This garden is one of 12 gardens for charities supported by funds from Project Giving Back, a very effective newcomer to Chelsea. The project’s aim is to support display gardens that will enjoy a second life after the show or help a charitable sponsor to raise funds on the strength of a good display. This support is one reason why the range of plants and flowers in the outdoor gardens has greatly improved: the project promises two more years of involvement and its candidates for 2023 have already been selected.

I also liked the charity Perennial’s garden “With Love”. Clean straight lines, good varied surfacing and another fine array of plants are a credit to the designer Richard Miers in his first solo garden on Chelsea’s Main Avenue. The only gimmick is a screen at the far end illumined with words from the poet Tennyson: “if I had a flower for every time I thought of you.” A self-absorbed Chelsea Pensioner was standing under it when I visited: not many flowers due at that moment.

Miers’ mix of double-white Duchesse de Nemours peonies, pink and white centaureas and a strikingly dark lupin called Masterpiece is excellently devised. In general dark double annual poppies and dark single peonies are welcome newcomers to the big budget Chelsea designs. For once, plants have not let the projects down. The Chelsea judges gave Perennial only a silver and amazed me by giving Best in Show to “A Rewilding Britain Landscape”, a jumble of wild flowers, well chosen but not what gardeners labour to contrive.

I will discuss the most notable displays indoors in a fortnight’s time. Meanwhile, in this year of new ventures, a longstanding champion of the show was absent. On TV, you perhaps have your favourite Chelsea presenter, but none excels the masterly Peter Seabrook, star of BBC Gardeners’ World in the 1970s and a regular presenter for American TV into the later 1990s. He died this January, aged 86, sustaining to the end his enthusiasm and encouragement to beginners, reflected in the exhibits he fostered with young gardeners at Chelsea.

It was he who inspired the display of small front gardens in the show’s main pavilion as if they belonged to an imaginary street. Garden centres owe him a debt for his early championing of plants in polythene containers and for his promotion of better varieties, especially of bedding plants. The latest is Verbena Margaret’s Memory, named after his recently deceased wife.

Yet again they have fallen for leaves with fancy colouring, whereas most of us prefer 50 shades of green

For a mere 45 years Seabrook wrote the gardening column for The Sun newspaper, making it the most widely read in Britain. When I asked him at a Chelsea show to name the favourite of all his articles, he picked on a tour de force in which he linked the steep decline in birds in urban gardens to the social change that was taking wives as well as husbands out to daily work. As the couple left the house, Seabrook observed, they locked out the family’s cats and left them to spend the day in the garden, greatly to the harm of its feathered residents. Even the toughest tabloid editors congratulated him on provocative lateral thinking.

Smiling as he recalled it, he asked me to wait a minute while he spoke to camera. He turned to face the TV and with matchless cool, began, “Just look at the begonias…”, sustaining a word-perfect take for five minutes.

At the RHS President’s Lunch on Monday we drank a toast to Seabrook and his many contributions to Chelsea. I then went to the Great Pavilion to check out Blackmore & Langdon’s display of massive begonias, just looking at them, of course, but also remembering that they were what most impressed me when I first came to the Chelsea show in 1963. At that time Seabrook was working for a seedsman, his TV talent unrealised.