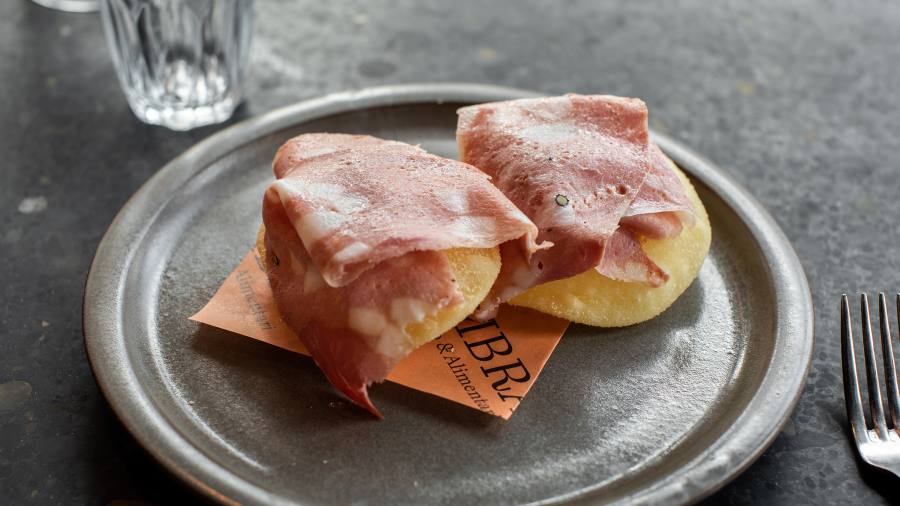 To say that Ombra occupies unprepossessing premises would be a staggering understatement. It overlooks a canal, which might be lovely in Venice but brings little joy in Hackney. It repurposes retail premises, designed in the 1970s without apparent effort, which have fallen into what you might charitably describe as scabrous desuetude. There is a terrace, which must buzz on a pleasant summer evening but in winter has the sole tectonic advantage of shielding you from a view of the A107 with its wall of plastic sheeting.

Inside they’ve set up a restaurant much like you might set up a forward operating base. But, dear God, they are turning out food that will make you weep.

Historians have signally failed to isolate the moment mortadella became so bloody cool. I mean, for years, it was the ugly orphan child of the charcuterie board; flaccid, lard-flecked luncheon meat, ignored by all but the most zealous salumists and then suddenly, bang, you can’t move east of the Inns of Court for artisanal tube-meat. Don’t get me wrong. This reappropriation is a fine, fine thing. Ombra’s wild boar mortadella is at the very least a minor miracle, and coiled down on to a gnocco fritto — a carbo-puff, somewhere between an impossibly light fried pitta and a bread pomme soufflé — it’s enough to support a Formal Decree of Beatification, if not actual sainthood.

Cacio & Pepe Gougère, to be brutally honest, didn’t live up to its potential. The little choux-bombs were fine, but a sprinkling of grated cheese and black pepper is not enough. C&P isn’t about the cheese or the pepper, it’s about their scandalous union into comforting lipid glop, which is exactly what I want my gougères pumped full of. Serving them next to the gnocco was the kind of error you make when you double date with your richer, wittier and handsomer friend.

When I am World King, I think I might get rid of burrata. It’s too easy to tear roughly apart, drizzle with oil and call a starter. Fortunately, at Ombra, they do neither. The bravely unripped ball of cheese nestles into the curve of a grilled wedge of sweet pumpkin, guddled down into a pool of the same rendered into a lurid purée, then topped with crisp fried sage and crumbled Amaretti biscuits. It’s a well-tried combination of flavours, so it is to their credit that they deliver it successfully and so memorably.

A whole fried Roman artichoke has the look and texture of oily potpourri, but it tastes sensational. There’s still a steamed, sweet heart in there, but to get to it you chomp willingly through half a bowl of fibrous crisps . . . in a good way. It’s one of those dishes that needs no complicated dressing at all. The way the caramelisation and bitterness sit with the creamy and still subtly fragrant core fires more synapses of joy than any sauce could.

The day I’m not drawn to raw meat on a menu, I suggest you take me out back by the bins and finish me with a couple of rounds to the brainstem, but raw lamb is a challenge. Lebanese kibbeh nayeh counters the lanolin greasiness of the mince with garlic, onion and spices, but here it’s served plain, the better to blend with a strong tuna mayo — basically tonnato sauce. It is not a combination I’ve met before, but it is inspired. You know how anchovies somehow enhance rare roast lamb? Yeah. That. To the power of 10. Served with pear and puntarelle it’s my earliest contender for “dish of the year”.

Dessert was a tiramisu, lofty and light, with a stimulating hit of espresso, plenty of chocolatey depth and as much detectable booze as a 12-step meeting. I’m not sure how this is possible. Parsimony certainly wasn’t characteristic of anything else on the menu. Maybe it’s a Dry January thing. Anyway, I managed to drown my disappointment in pears and taleggio, which at least proclaims its asceticism upfront.

The odd layout of Ombra sites the kitchen halfway up the back wall, like a Royal Box. You can almost sense the chef, watching absolutely everything from above, controlling proceedings. If that’s how he’s choreographing such an excellent experience, then it seems to me a very good thing.