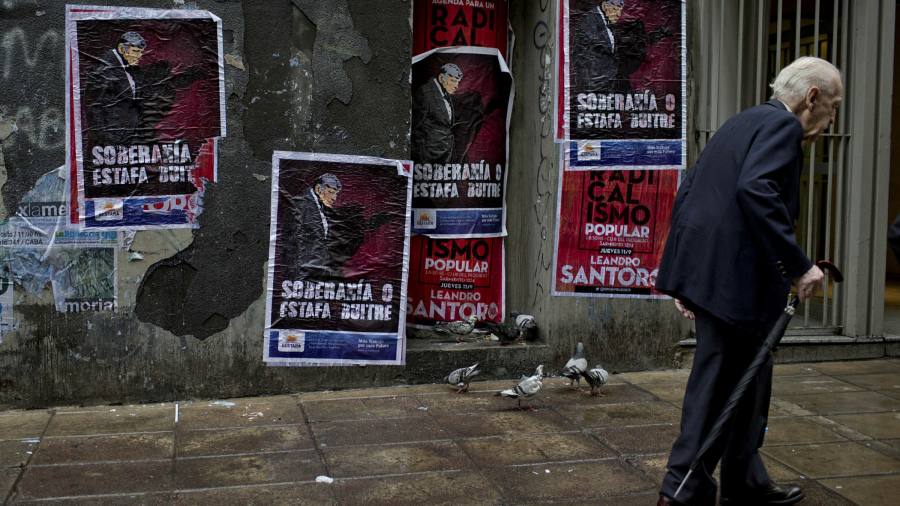 Remember the pari passu clause? The pointless piece of legal boilerplate in sovereign bonds that Paul Singer’s Elliott Management managed to weaponise against Argentina and turn into a $2.4bn windfall? Turns out we may have a Russian sequel.

For those that can’t remember the saga of nearly a decade past, pari passu is simply a contractual clause that migrated from ordinary corporate bonds — where they kinda make sense — into sovereign bonds, where they do not.

Pari passu means “in equal step” or “on equal footing”, and in bond contracts mostly indicates that creditors rank equally when the proceeds from a bankrupt company’s assets are carved up. Countries obviously don’t go through anything like this, so the clause was long considered inconsequential boilerplate, the kind that junior lawyers unthinkingly copy and paste into every country’s bond prospectus.

But in 2012 this nothingburger clause went nuclear.

Elliott Management, which had been suing Argentina over the onerous terms of its $80bn debt default in 2001, convinced New York judge Thomas Griesa that the pari passu clause in its defaulted bonds should mean that Buenos Aires could not keep servicing its new bonds. Elliot and a few other “holdouts”, as you might have guessed, owned the borked bonds.

Griesa ruled the pari passu clause meant Argentina had to pay its debts “ratably”. In other words, whenever it paid its restructured bonds, it had to pay the holdouts too. And by the miracle of accumulated post-default interest, that was a lot of money. It’s fair to say the Argentines were unhappy. Viz, those posters of Griesa in Buenos Aires.

Long story short, after initially defaulting again rather than pay the hated “vultures”, Argentina settled the lawsuit. Worried about the broader implications, the US Treasury prodded the International Capital Markets Association into arranging an overhaul. In 2014, the industry trade body published proposed new bond guidelines for its members that suggested rewording the pari passu clause to neuter its destructive potential. Here is the new wording guidance:

Since then, most countries have adopted variants of this phrasing in the bonds they issue, and it looked like the pari passu clause might be banished back into the world of legal arcana where it belongs.

With one notable exception.

Yep, Russia seems to have decided that a sovereign default was such an outlandish prospect that they never adopted the new caveated language.

Here, for example, is the phrasing in its 30-year $7bn bond issued in 2017; Russia’s biggest international bond at the moment. From the text (with our emphasis):

Russia’s eurobond programme has the same wording. As Mitu Gulati — a law professor at Duke who literally wrote the book on the pari passu clause — notes with some relish, this could be a “monumental goof” on two fronts.

First, the mere fact that Russia didn’t revise their pari passu clause since 2014, when everyone else started doing so, could be seen as the country explicitly wanting to keep the old Griesa interpretation of the clause’s meaning. After all, Russia revisited other clauses since 2014, such adding an ‘alternative payment currency’ clause in case of sanctions (more on that coming up).

Second, Russia’s pari passu clause doesn’t just narrowly apply to its external debts but “all other unsecured and unsubordinated obligations of the Russian Federation”. That means it could theoretically apply to any debts whatsoever, Gulati points out.

Now, it’s not clear whether this really matters much, at least in the short run. Even in the longer term, there are factors that may limit the clause’s impact.

Russia is very likely to default on its external debts, either out of pique or simply because sanctions will make getting the money to creditors impossible in practice. But it will be nigh-on impossible to restructure its debts while under sanction anyway. When it finally is able to do so, the beefed-up “collective action clauses” in the bonds — which Russia’s lawyers DID incorporate — will make it easier to corral any recalcitrant creditors into an agreement.

UK courts that would likely hear any cases have also notably taken a different view of the pari passu clause than Griesa did. Even Griesa indicated before he passed away that his initial ruling was more about the unique circumstances of Argentina’s misbehaviour than something something that should become a wider precedent.

Moreover, Russia has not waived its sovereign immunity, nor submitted to the jurisdiction of any overseas courts when it comes to its bonds. That will complicate any future lawsuits and make it very difficult, even for successful plaintiffs to seize Russian assets overseas.

However, at some point this clause could once again become a potent potential weapon in the hands of sufficiently determined bondholders. And given the scale of Elliott’s Argentine windfall, someone will surely be tempted to try using it, even if success is unlikely and squaring up to Vladimir Putin is less palatable than Cristina Kirchner.