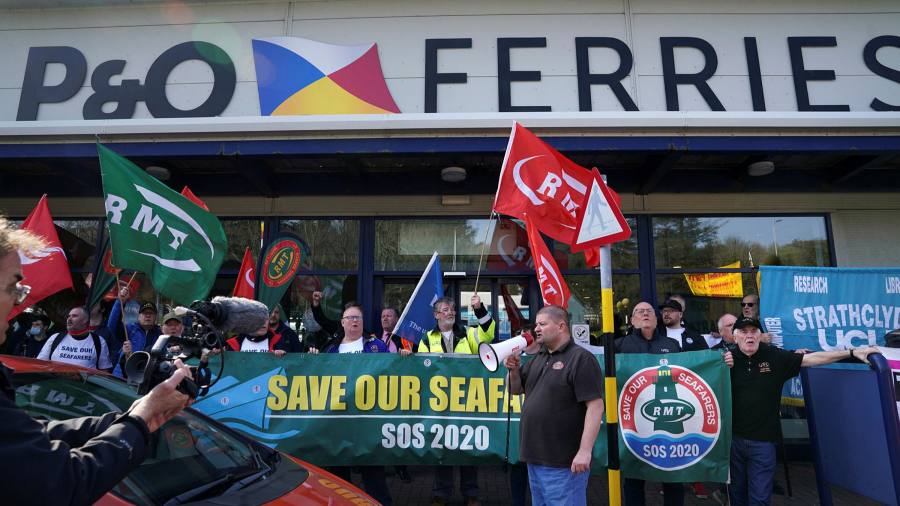 The writer is general secretary of the TUC

The P&O Ferries scandal has been, without doubt, one of the most shameful episodes in modern-day industrial relations. It is also a reminder that UK employment law is not fit for purpose.

Summarily — and illegally — dismissing the entire British crew without notice or consultation has prompted calls for boycotts and legal redress. But the big question is where we go from here. The immediate response must be for the government to do everything it can to get all 800 staff reinstated. Waiting for a court decision will not save a single job. Ministers must come down on the company like a tonne of bricks.

Transport secretary Grant Shapps has now called for the chief executive, Peter Hebblethwaite, to resign. But the government must also take action and suspend all contracts with the owner, DP World, including lucrative freeport deals, until the sacked workers are reinstated.

The P&O case should serve as a cautionary tale. It must be made clear that if you trample over your workers’ rights you will not receive a penny of taxpayers’ money and your brand will be permanently damaged. But ministers taking action against individual employers is not enough. When Boris Johnson entered Downing Street he promised to bring forward an employment bill and to make the UK “the best country in the world to work”. Nearly three years into his premiership, the prime minister has done nothing to stop the seemingly inexorable rise of casualisation and insecurity.

To add insult to injury, he has whipped Conservative MPs to oppose a bill to end “fire and rehire” — a practice that spread like wildfire during the pandemic. TUC research found that nearly one in 10 workers have been told to reapply for their jobs on worse terms and conditions or face the sack.

P&O’s abuses must be a turning point for this country. Because if the government fails to bring forward an employment bill now, it will be giving the green light to bad bosses up and down the land who want to treat workers as disposable labour. And, crucially, the cowboy operators will threaten to undercut good employers and responsible businesses.

So what must change? For a start, we need a much tougher sanctions regime. Right now, the penalties for breaking employment rules are far too weak. P&O’s failure to consult staff before sacking them over Zoom was almost certainly illegal. But the company’s owners clearly thought it was a price worth paying for being able to bus in lower-paid agency workers.

We need to make sure that employers who behave like P&O are hit with proper financial penalties. All too often companies are let off with just a slap on the wrist. Just look at the paltry fines for minimum wage breaches, widespread failure to honour holiday pay, or lack of a single employer successfully prosecuted for failing to notify the government of redundancies.

There must be much tougher requirements on employers to negotiate with unions before they embark on redundancies. And we must ensure that trade unions have the freedom to recruit and mobilise their members to protect pay and conditions.

Anti-union laws such as the Trade Union Act 2016 were designed to weaken workers’ bargaining power by enveloping unions in red tape, making it easier for employers to block industrial action, and harder for unions to meet their members in workplaces: cowboy capitalism is the result.

Ministers must also act to stem the tide of casualisation and insecure work and make a reality of the promised employment bill. The world of work, particularly at the bottom of the labour market, has transformed in recent decades. Official data show that one in nine workers, about 3.6mn people, are employed without basic protections.

One million — including many key workers — are trapped on zero-hours contracts. About 7.4mn workers do not qualify for unfair dismissal rights. And oppressive use of AI surveillance of workers took off during the pandemic.

The direction of travel has been obvious for several years, but this Conservative government has sat on its hands. Over this period, I’ve heard many employers talk about their ambitions for a higher skill, higher wage, higher productivity economy. That’s what the TUC wants too — but right now we have to spend our time fighting practices that hark back to the Victorian era.

Good employers have nothing to fear from an employment bill that brings our laws into the 21st century. Proper legislation will stop the reputation of Britain and British companies being tarnished by the actions of undercutters like P&O.

If we carry on like this there will be more such scandals in the future. No decent person wants that.