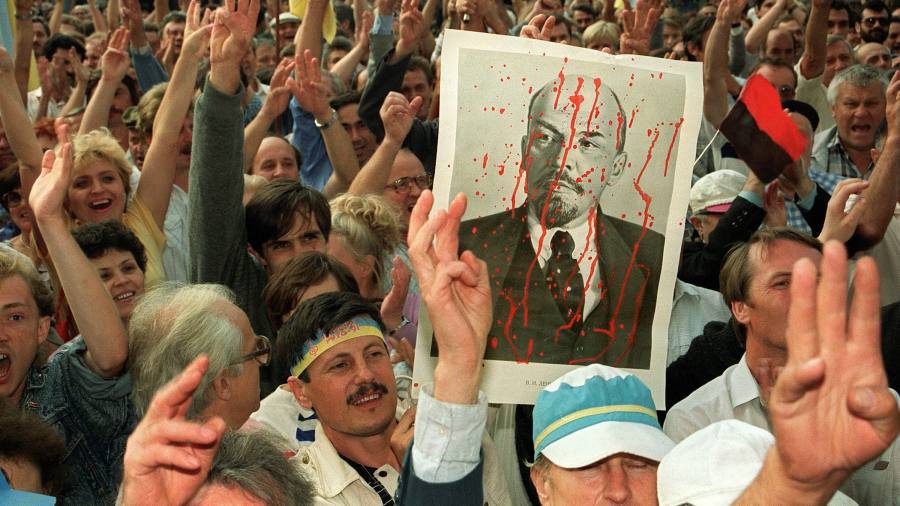 On Monday afternoon I took part in the dissertation defence of a young Ukrainian historian. I had to call in to Lviv, to the Ukrainian Catholic University. On a day full of threats, we had a discussion of history.

The candidate submitted a biography of Mykhailo Rudnyts’kyi, a poet and literary critic who hailed from an illustrious Ukrainian family: one of his brothers, Antin, was a composer; his other brother, Ivan, was a journalist; and their sister, Milena, was a feminist, parliamentarian, an activist at the League of Nations.

They were born in the old Habsburg monarchy and matured in the Poland of the 1920s and 1930s, which had a large Ukrainian minority. The Rudnyts’kyis lived in a cosmopolitan city that they called Lviv. Not far to the east was the Soviet Union, with its Ukrainian republic, home to far more Ukrainians.

A century of Ukrainian pain and hope came through the details of the family history. In 1932 and 1933, Milena struggled to bring the attention of the world to the Holodomor, Stalin’s political famine in Soviet Ukraine, which killed some 4mn people. Stalin, for his part, blamed Ukrainians themselves for starving and his propaganda called anyone who mentioned the famine a Nazi.

Hitler had just come to power. Like Stalin, he wanted to master the fertile black earth of Ukraine and his ultimate war aim was to win it for a German racial empire. In 1939, Stalin and Hitler were allies in the first part of the second world war and split Poland between them. Suddenly the Rudnyts’kyis’ home city of Lviv was part of the Soviet Union.

He and his siblings were Jewish on their mother’s side. They were all famous Ukrainians; it was a nation they had chosen. Two of their grandparents were Jews, one was a German-speaking Pole and only one was Ukrainian. Their father and their mother had spoken Polish together, and their father had died young. Yet they all helped to make a Ukrainian nation.

I was thinking about all this as Russian artillery began to fall in eastern Ukraine.

Ukraine has been independent since 1991, since the end of the Soviet Union. In 2014, Russia invaded, occupied and annexed a good deal of Ukrainian territory. And on Monday evening Russian president Vladimir Putin ordered troops into eastern Ukraine.

While a young Ukrainian was getting his PhD, Russia’s president justified violence with a bizarre diatribe about the past that brought into intense focus claims Putin made last July in a long essay: there is no Ukraine; no Ukrainians; it is all just part of Russia, or invented by Russia, therefore to be claimed and controlled and, if necessary, annihilated by Russia. Putin is no historian. Ukraine has its own distinct and fascinating history and Ukrainians have as much a right to a future as anyone else.

Putin thinks that everyone who speaks Russian must be a Russian, and needs his protection. Pretty much everyone in Ukraine does speak Russian. Everyone in the room during the dissertation defence spoke Russian, I would guess. Mykhailo Rudnyts’kyi, for that matter, knew Russian. But all of these people, past and present, also know Ukrainian. The dissertation was written in Ukrainian. And all of these people, past and present, knew Polish, and other languages.

There is a deeper issue here. Whatever language we speak, it is what we say that matters. Our identity is not to be decided by distant tyrants, whatever language they might speak.

Nations are built by people who take risks now in the name of a better future for the people they choose. It can all be swept away, of course, by people with other ideas and greater power. Stalin and Hitler had visions for Ukraine that comported with their own ideologies. When the two of them were in power, between 1933 and 1945, Ukraine was the most dangerous place on earth. Putin has his own contorted view, and seems to be dragging Russia to war on its basis.

At the end of the dissertation defence, everyone clapped. Knowledge had been secured and civilisation, in some humble way, consolidated. Not long after the ceremony ended, Russian soldiers crossed the border. They had been given a copy of Putin’s essay on Ukraine and Russia, a farcical myth of enforced unity. We need more dissertations from young people and fewer war pamphlets from old dictators.

History cannot stop a war. But it can help us, at least, to understand how one begins, which is with arrogance and lies.