The west must hold its nerve on Ukraine 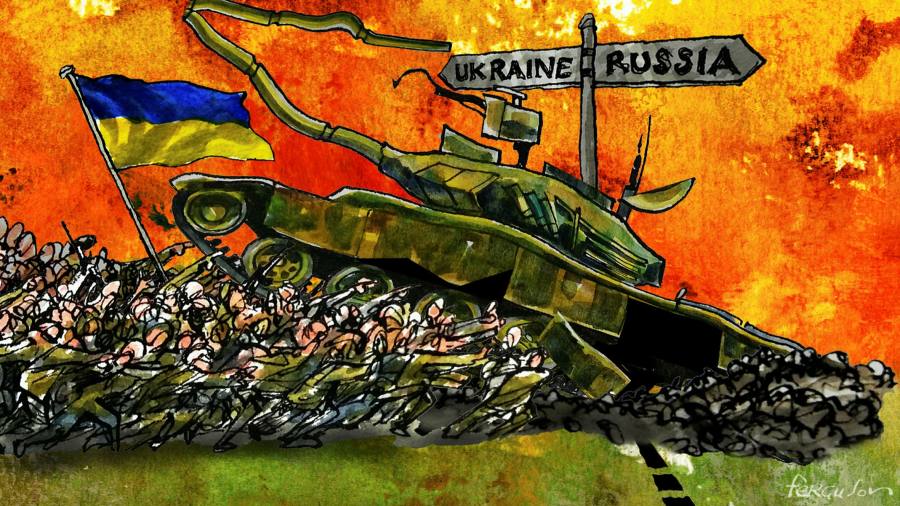 Is the Ukraine war finally turning Vladimir Putin’s way? The Russian army is grinding forwards in the Donbas. If Putin’s military can capture Ukraine’s industrial heartlands and cut the country off from the sea, Ukraine’s survival as a viable state would come into question.

That grim scenario is certainly possible. But it is not inevitable — or even likely. However, to prevent Russia achieving a semblance of victory, the western alliance backing Ukraine has to hold its nerve and increase its support for Kyiv. The momentum in the war must shift back towards Ukraine before there is any prospect of an acceptable peace settlement.

The war in Ukraine is essentially being fought on three fronts and among three protagonists. The first front is the battlefield itself. The second front is economic. The third front is the battle of wills. The three participants are Russia, Ukraine and the western alliance backing Ukraine.

The Ukrainians are increasingly edgy because they worry that western support is going soft. They know that, in a straight fight with Russia, Ukraine has the advantage only on the third front — the battle of wills. As a country fighting for its freedom and independence, the Ukrainians are much better motivated.

When it comes to firepower and economics, however, the bilateral advantage tilts towards Moscow. Russia has more heavy artillery and more aircraft than Ukraine and it is finally making that tell in the Donbas. Sabine Fischer, a German academic, says the mood in Moscow is “swinging back to ‘we can win this thing’”. Russia has suffered heavy casualties but so has Ukraine. President Volodymyr Zelensky said recently that his country is losing up to 100 men a day. The real figure may be higher.

Ukraine has also sustained much more serious economic damage than Russia. The Russian economy is projected to shrink by 12 to 15 per cent this year. But Ukraine’s economy, smaller to start with, is expected to contract by 45 per cent.

Other than higher morale, Ukraine’s great advantage is western support. If the western alliance gives the Ukrainians the weapons and the economic aid they need, then the balance of the war will switch back towards Kyiv.

There was palpable nervousness among the large Ukrainian delegation to the World Economic Forum in Davos last week that western support may soften. The Ukrainians are alarmed by the slowness of weapons deliveries from the US and Germany, which is making it harder to push back the Russian advance. They worry that, by September, western countries will be focused more on their own economic problems than on the plight of Ukraine.

They fear that some countries — probably led by France or Germany — will grab on to illusory peace negotiations and drastically reduce support to Ukraine. These Ukrainian anxieties will have been raised by the recent phone call between Putin and Olaf Scholz and Emmanuel Macron, the leaders of Germany and France.

These fears are understandable. But I think (and hope) that they are wrong. Scholz’s speech in Davos showed a clear understanding of what is at stake in Ukraine. The chancellor argued that Russia is waging an imperialist war and stated that “Putin must not win”. Importantly, the Germans say the same thing in private — insisting that they have no intention of forcing Ukraine to cede territory and fully intend to deliver the promised weaponry.

If the west holds its nerve, keeps its promises and accelerates the delivery of weapons, then the pressure on the Ukrainians to make territorial or other concessions to Moscow will ease. With more heavy weaponry, the Ukrainians should be able to hold the Russians off and then force them back. Professor Lawrence Freedman points out that “Russia must now defend a long front and substantial occupied territory. Its forces are already stretched and Moscow is scrambling to find reserves.”

It is on the economic front, however, that Russia’s position could dramatically weaken over time. The Russian army has lost a lot of military equipment. Replacing it is very hard in an economy that is being hammered by western sanctions.

The Russians are now so short of semiconductors that they are reportedly using computer chips from dishwashers and refrigerators in military equipment. The US government claims that Russia has lost around 1,000 tanks in battle and that two of the country’s tank manufacturers have had to stop production for lack of components.

The financial squeeze on Putin is also tightening. At present, Russia is still receiving roughly €1bn every day from the export of oil and gas. But the EU plans to end imports of Russian oil by the end of the year and to drastically reduce gas imports as soon as possible. Germany is now constructing and leasing new terminals for the import of liquid natural gas, which will allow the process of cutting off gas imports from Russia to begin in earnest next year. The Russians do not have the pipelines in place to redirect that gas towards China and so face a disastrous hit to their national finances.

The prospect of a prolonged war is horrifying. But until the Russian government abandons its goal of conquering new territory in Ukraine, there can be no prospect of real peace talks. That may only be possible when Putin’s troops run out of equipment and his government runs out of money.