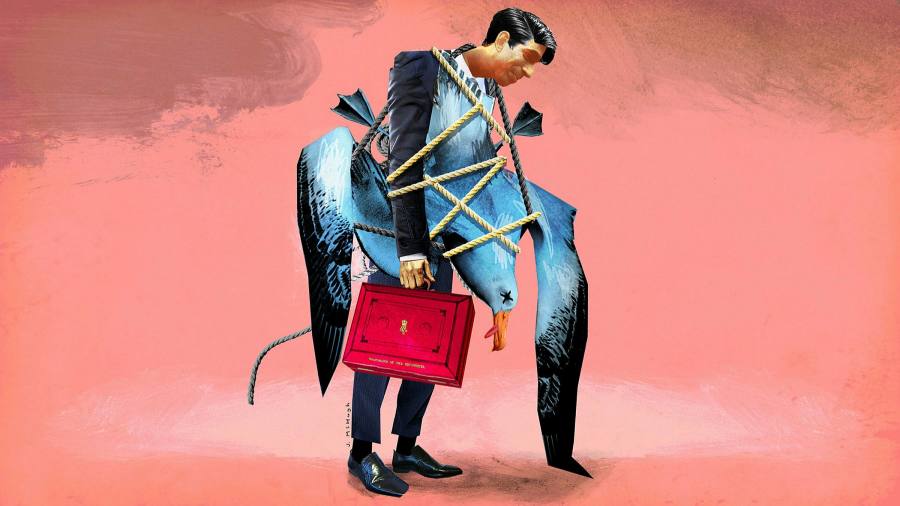 With the UK facing the biggest fall in living standards since the 1950s, a pandemic hangover and a war in Europe, this should have been a time for clarity and ambition. Instead, we got cynicism. Chancellor Rishi Sunak, with the prime minister grinning behind him, used his Spring Statement this week to claim that he would cut taxes — although this government is raising tax and spending to levels that even Labour would not have dared to.

If the only thing the Conservative party can agree on is signalling a tax cut before the next election, then it’s in a pretty parlous state. Yet that’s the best explanation for the strange commitment to reduce the basic rate of income tax in two years’ time, which pales into insignificance compared with the tax rises which Boris Johnson’s government has already imposed, and will continue to inflict through fiscal drag, corporation tax rises and the national insurance levy. If Sunak was reaching for political theatre — the “rabbit out of the hat” that chancellors like to conjure from autumn budgets — he could have abolished his national insurance hike or done more to help poorer households. Instead, he chose to woo backbenchers hungering for a hint of Thatcherite backbone in a big spending era, and who will form the first-round electorate in any future leadership contest.

Given the gravity of the situation, this jarred. The coming year will see catastrophic falls in disposable income, with appalling consequences for some families: the Resolution Foundation has calculated that 1.3mn Britons will be pulled into poverty. Sunak is right to worry about the billions which will still be spent on servicing the national debt. But his decision to prioritise debt reduction over cushioning the poorest is a mistake, for both his party and the country.

It’s easy to carp, when the challenges are coming thick and fast. As Sunak says, he can’t solve every problem. But with a prime minister who loves to spend, it feels as though the chancellor is left trying to burnish his small state credentials by bearing down on debt when inflation is already helping there. He took a leaf out of George Osborne’s playbook by pledging to cut the deficit, so he can eventually lower taxes. But he omitted to say, as Osborne did repeatedly after the financial crisis, that “those with the broadest shoulders should bear the burden”. Osborne was heavily criticised for his changes to welfare benefits, but he also hit the richest 10 per cent with changes to stamp duty and pensions. There is little sign that this government has done much serious thinking about the fairest way to share the pain. Hitting students and workers, the young not the old, is political.

Voters have not forgotten Osbornite austerity. The chances of another Tory election victory may turn on whether voters see this as an energetic new administration, or just the same old Tories who have ruled since 2010. By 2024, it will be even easier for opposition parties to argue that it’s time for a change. Johnson was brought to power by voters who wanted to “get Brexit done” and move on. But beyond Brexit, there is a policy incoherence which is being exposed as Covid recedes.

This government presides over a maelstrom of shifting priorities, which seem driven more by headlines and polling than an overarching narrative. The housebuilding revolution promised in 2019 has been dramatically watered down. Britain’s ambition to lead the global electric vehicle revolution is floundering, with a lack of publicly-available recharging points and low investment in gigafactories compared to the continent. There is no clear programme of public service reform (apart from the commendable efforts to improve technical education), despite Sunak’s decision not to raise departmental budgets in line with inflation.

The chancellor has added to the confusion by resurrecting a manifesto pledge to increase the point at which people start to pay national insurance — thus blunting the pain of the NI hike he announced only six months ago. This rise was itself a response to the prime minister’s promise to “fix social care”, which has been blighted by complexity and disagreements. Sunak laments the lack of capital investment by UK businesses compared to France and Germany; he might reflect that policy uncertainty undermines business confidence. The Office for Budget Responsibility has calculated that UK trade as a share of GDP has fallen two and a half times more than in any other G7 country since 2019, and that the resulting drop in productivity is likely to be permanent.

There is much to like in Sunak’s long-term plan for productivity. But bigger thinking is needed. This was the time to launch a generous scheme for home energy efficiency, not offer tiny, grudging loans; and to take on the appalling underperformance of some public sector agencies, not just bluster about the DVLA.

For all its hyperactivity, this is beginning to look like a tired government which is only jerked back to life by dramatic events. Every time it starts to flag, something turns up, together with a grandstanding opportunity. We read that Johnson is “desperate to go to Kyiv”, and that Liz Truss masterminded the release of Nazanin Zaghari-Ratcliffe by asking her officials to be “creative”, when what they actually did was to finally shell out £400mn just as we became desperate for Iranian oil.

It may suit this administration to keep having to react to circumstances, given its lack of a central philosophy. But the British ship of state has been lurching around since 2016, with serious consequences for investment and our soft power. If Sunak ends up presiding over a high-tax low growth state, it will be the ultimate irony for a man who passionately believes in the opposite.