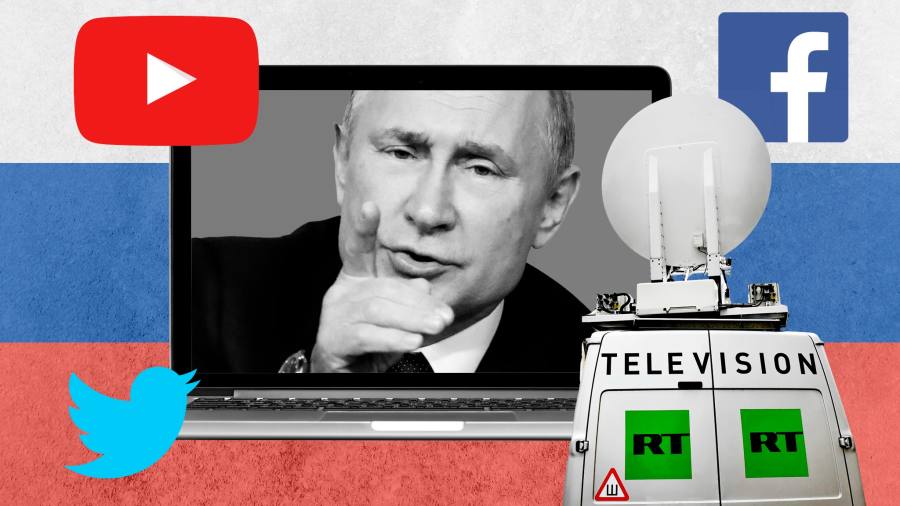 Russia’s invasion of Ukraine marks a turning point in history and has thrown existential questions before the democratic world. Soul-searching is also needed by technology companies. Silicon Valley-based firms played a prominent role in the run-up to the war and during the Russian escalation. Now they can hopefully offer vital platforms for the tens of millions of Ukrainians under attack. But the fact that it has taken war for certain moral lines to be drawn is devastating and should provide a new chapter for powerful tech firms.

Putin’s playbook did not start this month, or this year. Between the aggressive meddling in Georgia in 2008, the annexation of Crimea in 2014 and the bombardments in Syria from 2015 onwards, his behaviour has been consistent. The sovereignty of other states is breached, civilians are targeted and human life is not spared. Justifying the violence and recruiting supporters, at home and abroad, leans on propaganda and disinformation. Cyber attacks are now also an integrated component of the Kremlin’s hybrid war toolbox.

Social media platforms have given wings to international Kremlin news outlets such as RT television and its video channel Ruptly. On YouTube, RT boasted of billions of viewers, significantly more than via TV. Ruptly was the most watched “news agency” on YouTube in 2020. The UK communications regulator Ofcom has sanctioned RT for misleading with programmes on Ukraine and Syria, but that did not stop business models conceived in democratic California from becoming megaphones for Putin and his helpers.

An often-heard counterargument is how social media companies have given the Russian people access to information. But that is not an extenuating circumstance. Social media platforms do not only have an on and off switch; they can also curate in a responsible, peace- and democracy-respecting way.

On a less visible level, the conflict waged against Ukraine and liberal democracy has been ongoing. A recent study shows that 74 per cent of all money made in ransomware attacks went to Russia, and one of the most impactful cyber attacks the world has seen, NotPetya, has been attributed there. Risk assessment and cyber security services have been largely outsourced by democratic governments.

The war on Ukraine has enhanced the push for companies to change their behaviour towards Russia. EU sanctions ban RT and other state propaganda outlets. Google temporarily disabled the live updates of traffic in its maps feature, to avoid revealing troop movements. Through commercial satellite services by companies like Maxar and Cognitive Space, images could be accessed to corroborate events on the ground. BackSky declared it would “stand with the courageous people of Ukraine” and Tesla’s Elon Musk responded to a tweet by the Ukrainian deputy prime minister asking for Starlink internet service to be made available as connectivity was disrupted.

But some extra visibility should not be confused with transparency on the impact of business models. A lot of detail about how disinformation goes viral, and whether company policies are enforced effectively, remains opaque. There is also the question of whether, in the midst of war, the tweaks decided in corporate settings are based on a full analysis that keeps the most vulnerable people in mind. Will companies ever be held to account for their policies?

The Silicon Valley tech companies have avoided being directly caught by sanctions, unlike airlines, banks and energy companies. The political pressure on them from European political leaders is, however, unprecedented. Leaders of the Baltic states wrote to YouTube, Google, Twitter and Facebook asking the platforms to demonetise state media accounts, and not to allow accounts to glorify crimes against humanity. The fact that a political appeal is needed to push companies to take a stance against glorifying war and alleged war crimes is devastating.

What decisions companies take in response to the Russian invasion of Ukraine will have ripple effects for both the immediate and the future. After all, what justifies taking down Russian state propaganda in wartime, while leaving it up in Syria or Ethiopia?

The place of tech companies at the heart of war underlines the powerful role they have grown to take. I sincerely hope Putin’s aggression, and the essential role his propaganda machine has played, serve as a broader wake-up call for them. It should not take the breakout of another conflict for companies to become responsible actors, and to draw some basic moral lines globally.