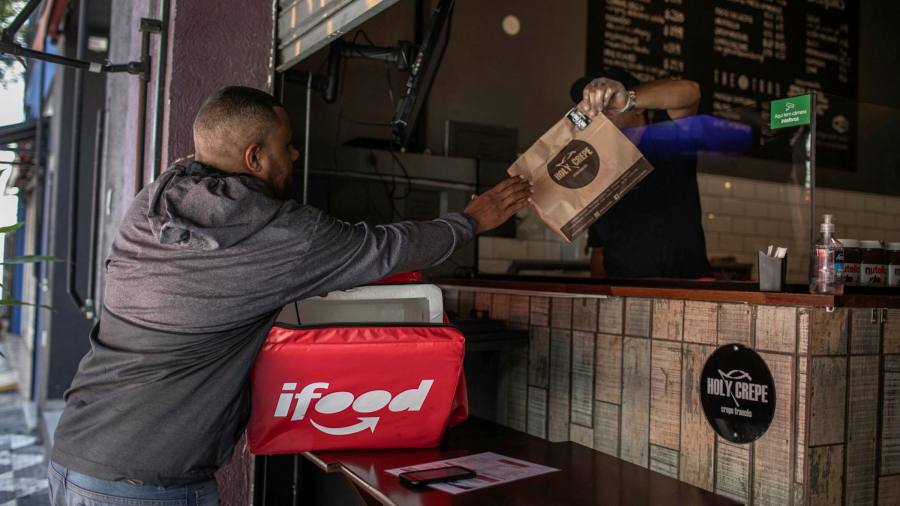 If Uber’s decision to take meals off the menu disappointed diners in Brazil, its main rival there must have been licking its lips.

The Silicon Valley giant has exited from restaurant deliveries in Latin America’s largest economy after struggling to break the dominance of iFood, a homegrown app and the undisputed national leader.

At the forefront of a technology explosion in the region that has drawn in record amounts of venture capital, business has boomed for the Brazilian start-up during the Covid-19 crisis.

As orders have doubled from pre-pandemic levels to above 60mn a month, iFood has extended further beyond its core activity into groceries, logistics and even credit for establishments on its system.

“The point is not just to deliver food, it’s an ecosystem with various services that reach all the customers in Brazil, and which has the purpose of making the country function better through technology,” said Fabricio Bloisi, chief executive, in an interview with the Financial Times at the company’s headquarters in a suburb of São Paulo. “We have already expanded a lot and will expand more.”

The opportunity is huge: despite broader economic malaise, Brazil has a large population of 214mn and there has been a surge in ecommerce activity since the onset of Covid-19.

All this will be in the sales pitch to prospective investors, as a 33 per cent slice of the privately held group is shopped around by shareholder Just Eat Takeaway.

Giving an indication of the potential valuation for iFood, Europe’s biggest meal delivery company last year said it had rejected a bid of €2.3bn for the stake as “simply too low”.

Yet while celebrated as a standard-bearer for tech innovation in South America, challengers have accused iFood of unfair behaviour to solidify its position.

The criticism centres on its exclusivity agreements, not uncommon among delivery apps, which prevent bars and restaurants from joining other platforms. Combined with iFood’s dominant position, detractors argue the practice is abusive and stifles effective competition.

Although calculations of market share vary, an estimated 80 per cent of eateries that offer delivery are on iFood, according to the Brazilian Association of Bars and Restaurants (Abrasel).

Following a formal complaint by Colombian competitor Rappi that was seconded by Abrasel, the country’s antitrust watchdog provisionally banned iFood from signing any new exclusivity deals almost a year ago while an investigation continued.

Uber Eats, which had previously departed from several other markets around the world, said in a letter to regulators earlier this month that “artificial barriers imposed by iFood” and “exclusionary conduct” had contributed to its retrenchment in Brazil.

Both adversaries of iFood have insisted they are not against contracts of this nature per se, and even have their own. But Rappi, which is backed by the Japanese tech investor SoftBank, recently requested all of iFood’s existing exclusivity agreements be ended.

“The departure of Uber Eats makes it clear that it is not a healthy market and more drastic intervention will be required,” said Victor Santos Rufino, at the law firm Mudrovitsch that is representing Rappi.

No date has been set for a final decision by regulators.

Without going into specifics, Bloisi rejected the accusations, and claimed that the biggest single channel for meal orders in Brazil today was WhatsApp, followed by telephone.

“We are very convinced that what we do is totally legal, there is nothing anti-competitive, and what makes us grow is 5,000 people [employees] focused on serving the ecosystem very well [and] innovating with purpose,” he said. “In general, the product is better, customers like it more, delivery people like it more.”

Although iFood declined to provide details of financial performance, disclosures by another backer give an idea of its growth trajectory.

The group’s revenue tripled in local currency terms in the financial year ending March 31 2021, according to Prosus, the internet assets division of South African multinational Naspers. Even as restrictions on restaurants lifted, its top line increased two-fifths in the six months ending in September.

Despite trading losses increasing by $83mn to $100mn in the half-year period, driven by investment in grocery deliveries, Prosus said iFood’s core business was close to break-even.

Created in 2011, the popular app is a subsidiary of Movile, a Brazilian tech mini-conglomerate with roots in an IT enterprise co-founded by Bloisi in the late 1990s. In turn majority-owned by Prosus, Movile’s portfolio includes ventures in ticketing, games, logistics and financial technology.

Since its founding, iFood has raised about $700mm in funding and made nine acquisitions. It began deliveries in 2018; before then restaurants were responsible.

Today it has unrivalled reach across the continent-sized nation with presence in 1,500 towns or cities and an army of 200,000 couriers dispatching from 300,000 restaurants.

The company said its innovations have improved efficiency and brought down costs, with artificial intelligence helping to reduce delivery times, map out optimum routes and foresee orders based on customer data patterns.

However Fernando Lunardini, managing director at Boston Consulting Group, said with the pandemic waning he believed the Brazilian meal order market might be reaching a “plateau”.

“It’s very expensive for the restaurant,” he added. “Margins get tight, you have to increase prices, orders decrease. The balance is not favourable.” He warned that iFood might have to cut what it charges restaurants.

This perhaps helps explain the push into other areas, such as grocery delivery. iFood is building so-called “dark stores” to supply goods directly to customers in this nascent market.

However, sector specialists caution of tougher conditions in this segment, given the stronger bargaining power of supermarket chains and an array of competing apps.

Despite giving up on meals in Brazil, Uber Eats is betting big on this market in the country through Cornershop, a Chilean start-up in which it bought out the remaining stake it did not already own last year.

“It’s a business with potentially better economics because of higher tickets and more regular purchases,” said Cristina Alvarenga, head of the operation there.

Ahead of presidential elections in the South American nation this year, the favourite to win, former leftwing president Luiz Inácio Lula da Silva, has pledged to boost rights for digital gig economy workers.

iFood insisted it was ahead of the curve. It already offers insurance to deliverers, created a 28-day sickness and quarantine benefit during the pandemic and has a minimum route value for drivers.

Bloisi called for new legislation that is “flexible and ready for the future” to enshrine such protections. After receiving regulatory approval to begin drone dispatches, he said investment in AI was another priority.

“This is our big dream — to be able to predict what the customer wants before they do, faster, cheaper and with better quality.”