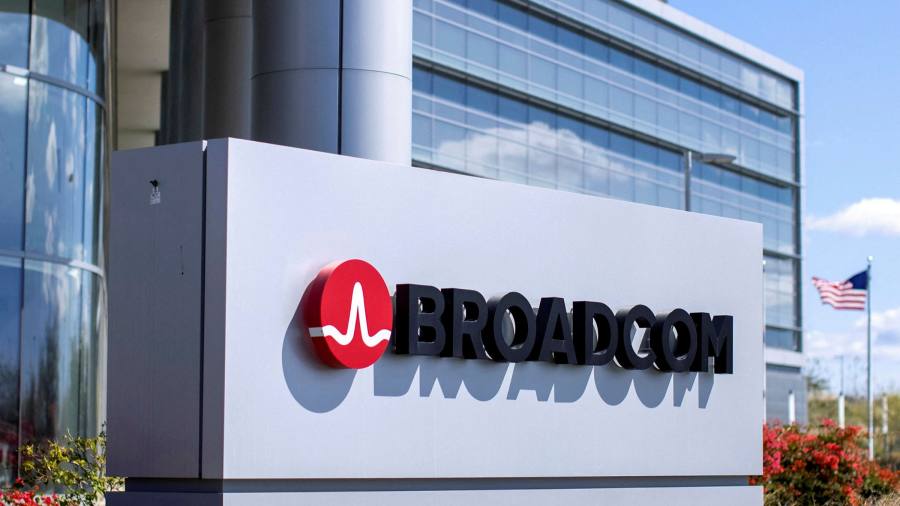 Chipmaker Broadcom has been thwarted as a consolidator in the semi industry, but its continuing diversification — with a $69bn deal to buy software maker VMware announced today — could prove more fruitful.

Despite continuing chip shortages holding up prices, the Philadelphia SOX index of semiconductor companies is down 28 per cent so far this year. The industry has its boom-and-bust cycles and Bank of America analysts say investors are currently pricing in a forthcoming recession.

Catalysts they say might turn things round for the chip sector include an easing of lockdowns in China that have affected supply and demand, a lift for smartphone and PC sales in the third quarter and resilience in data centre and enterprise demand.

In the latter area, acquiring VMware, whose software allows servers to be reconfigured in data centres according to demand, gives Broadcom a broader cloud offering for business. It also has cyber security cloud services provider Symantec in its portfolio.

Broadcom’s $117bn bid to buy its chip rival Qualcomm was blocked in 2018 by the Trump administration on national security grounds. VMware is less prone to industry cycles and offers high profit margins and stable recurring revenues from its services.

Meanwhile, graphics chipmaker Nvidia suffered the same fate as its peers, reporting strong results overnight but registering a fall in its share price of as much as 10 per cent in extended trading on fears for the future.

While Nvidia’s data centre business is performing well, its gaming one is suffering. Current quarter revenues will be around $8.1bn, it said, below analyst estimates of $8.44bn. It cited as reasons Russia’s war with Ukraine and supply chain problems in China due to lockdowns.

1. Musk must find more cash for Twitter deal
The billionaire is seeking to raise additional cash to fund his $44bn bid for Twitter after allowing a $6.25bn margin loan commitment backed by his shares of electric carmaker Tesla to lapse. Tesla’s shares have fallen by 25 per cent since Musk announced his intention to buy the social media platform in April. The news came after Twitter’s annual meeting, where a shareholder vote against the re-election of Silver Lake co-chief executive Egon Durban saw him tender his resignation from the board.

2. Apple’s pay raise
Apple will increase pay for its workers in an effort to deal with inflationary pressures, unionisation efforts among employees and increasing competitiveness in the labour market. The iPhone maker told staff hourly pay for US retail workers would rise to $22 per hour or more — up 45 per cent from 2018. Meanwhile, our #techAsia newsletter says the development of at least one of this year’s new iPhones is falling behind schedule.

3. Alibaba hit by lockdowns
Alibaba has warned that China’s Covid-19 lockdowns have hit its business, even after the ecommerce giant reported its sales growth had outstripped that of local rivals such as Tencent and Baidu in the first quarter. Chief executive Daniel Zhang said the lockdowns had snarled Alibaba’s logistics and supply chains and hit consumer demand for non-essential items, causing the company’s revenues to shrink by a low single-digit percentage in April compared with a year earlier, though he noted the situation had improved in May.

4. UK to review Drahi’s BT holding
The UK government is to examine the national security implications of French telecoms group Altice’s 18 per cent holding in BT, weeks before the investment vehicle controlled by billionaire Patrick Drahi will be in a position to make a takeover bid for the prized national asset. Elsewhere, business secretary Kwasi Kwarteng is looking at a Chinese chip deal in Wales and the UK markets regulator has set out plans to simplify listing on London’s stock exchange to attract more fast-growing tech groups and start-ups.

5. An Epic fight to keep the metaverse open
The boss of Fortnite’s owner Epic tells the Financial Times’s Patrick McGee about his worries that Apple and Google could extend their control over smartphone platforms to “dominate all physical commerce taking place in virtual and augmented reality”. In fintech, Klarna’s chief executive Sebastian Siemiatkowski told the FT he is not convinced the buy-now-pay-later company is facing a “down round” of financing.

Dyson this week said it was looking to hire 700 robotics engineers and gave a glimpse of what they would be working on. It showed its research on robotic arms and hands — picking up toys, stacking dishes and generally tidying and cleaning in ways that go beyond its current vacuum cleaners. The group says its master plan is to create the UK’s largest, most advanced robotics centre at Hullavington Airfield in Wiltshire and to bring the technology into our homes by the end of the decade.