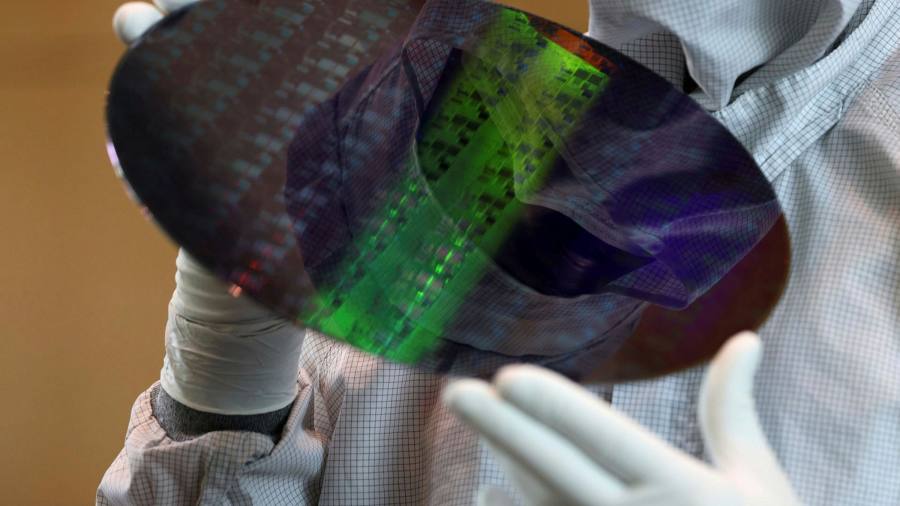 This article is an on-site version of our Trade Secrets newsletter. Sign up here to get the newsletter sent straight to your inbox every Monday

Hello all. This week, if I manage to tear my attention away from the chaos engulfing perhaps Britain’s worst prime minister since Lord North lost the American colonies, I’m turning back to the most salient example of the supply chain/reshoring issue: the global scurry to build semiconductor production at home. In a day or two the EU will unveil its Chips Act, inspired by the hyperactively interventionist French internal markets commissioner Thierry Breton and enthusiastically embraced by European Commission president Ursula von der Leyen. I shamelessly crib off the work of my excellent Brussels colleagues for precise details of the debate inside the commission, and I advise you to do the same. Today’s main piece stands back to consider the risk of gluts and trade wars from a semiconductor subsidy game that goes global. Charted waters looks at the reasons to be cheerful for global trade in 2022.

Chips off the EU bloc

Amid lots of strategic-autonomy rhetoric and with the shortages of the past year in mind, the European Chips Act will set the suspiciously precise yet arbitrary goal of increasing its share of the global semiconductor market from 10 to 20 per cent by 2030.

To this end, von der Leyen wants the EU to match, more or less, the $52bn in investment the US government is about to shower on its chip industry. Is this going to happen? It looks pretty ambitious. As I’ve said before, the EU is more resilient than the US when it comes to shovelling out public cash, thanks to its relative lack of centralised funds, and it has a history of being heavily over-optimistic that public money will leverage in private.

Compared with other countries, there are also significant policymaking counterweights in Brussels to the industrial policy interventionists. The main one is the commission’s competition directorate. The competition commissioner, Danish heavy-hitter Margrethe Vestager, is very publicly resisting a free-for-all on state aid. Providing quieter back-up is the trade directorate, which correctly fears a whole load of trade-distorting handouts undercutting its campaign to reduce subsidies worldwide.

In an industry that’s always been characterised by cycles of shortage and glut, the risk of global oversupply in some products is rising. Aside from China’s vast efforts to increase output, we’ve already seen public money start to gush out from advanced economies such as Japan and South Korea to build up domestic chip production. There’s no real sign of global co-ordination between governments: the EU’s Chips Act will call for partnerships with its international allies, but with no credible binding mechanism that we can see.

The chips that have been in short supply over the past year or two are often the less sophisticated “legacy” ones used in cars. But that’s a mature product. As the Peterson Institute’s semiconductors guru Chad Bown repeatedly warns, if the legacy chips shortage starts to diminish — and it’s at least partly related to the one-off surge in consumer durables demand — governments subsidising their production will end up with a lot of outdated facilities indefinitely dependent on public money. The likes of Breton claim they only want to subsidise manufacture for the more sophisticated chips, but if a fire hose gets turned on it’s hard to control it.

It’s tempting to think OK, if governments are daft enough to create global gluts in semiconductors (as they’ve done in steel, aluminium, shipbuilding and other prestige capital-intensive industries down the decades) so be it. Spend public money subsidising everyone else’s car industries and other downstream users if you really want to. It won’t be efficient, but it’s your money you’re wasting.

However, if you put that much money into boosting semiconductor production you’ll want to get first dibs on the chips if the cycle swings and there’s a global shortage. Hence either implicitly or explicitly these subsidy programmes contain threats of general export restrictions, going beyond existing blocks on the sale of sensitive technology to geopolitical rivals. This creates a classic prisoner’s dilemma like the vaccine procurement issue last year. If everyone else is building chip factories and preparing to block the exits you’d better do so too.

This suboptimal outcome doesn’t even make sense on its own terms. Everyone who knows anything about semiconductors seems to think it’s just not possible to take such a blindingly complex supply chain entirely in-house at any reasonable price — Vestager estimates self-sufficiency would cost the EU €240bn-€320bn. You can imagine a world where all the big economies have chip production facilities, there’s a global shortage of one particular product, everyone slams on export controls and still no one is actually self-sufficient.

The EU already has an excellent strategic position in the early parts of the supply chain, particularly thanks to its research capacity and to businesses such as the Dutch company ASML, which supplies extremely advanced lithography machines to chipmakers. Some very precise official support enhancing European dominance of this part of the global industry would give it strategic power. But that’s not just what the expansive version of the Chips Act wants. It’s trying to bring big chunks of the manufacturing supply chain within Europe, and it wants to spread production into other EU member states, such as, I don’t know, to take a purely hypothetical example, maybe Breton’s native France?

It’s not 100 per cent clear what’s going to emerge as the EU’s final strategy. Like everyone else, we’re watching the balls in the Brussels policy lottery clatter around the rotating drum ahead of the big draw. But along with the headline subsidy numbers, which will almost certainly be overstated, keep an eye on what people are saying or implying about how exports might be controlled.

And now for some good news. ING Bank’s macroeconomics team last week published its trade outlook for 2022, predicting that world trade will not only normalise this year but grow further, despite the challenging circumstances.

The chart, showing the percentage change in global trade volumes year on year, records a growth in merchandise world trade of 4.1 per cent this year, down from 10.6 per cent in 2021, but still a healthy figure.

Co-authors Inga Fechner and Rico Luman acknowledge that the pandemic remains an uncertain factor affecting the outlook for 2022. But they note that last year showed that supply chain problems and higher shipping costs didn’t necessarily hamper the world from continuing to trade. “The economics of trade still make sense,” they said. “So, we’re optimistic given the economic outlook, a hopefully receding pandemic, and clear evidence of richly filled order books, notably in the automotive sector.”

US president Joe Biden’s administration has renewed expiring tariffs on solar panels for another four years.

A podcast from the Centre for European Reform discusses the economics of climate change including carbon border adjustment mechanisms.

Six forthcoming WTO rulings against the US’s use of national security grounds to restrict imports could have serious implications for its future trade.

New research on a group of French companies during the first pandemic lockdown shows that holding higher inventories helped guard against supply chain shocks, but geographically diversifying sourcing did not.

The US and EU have agreed to allow trade between the two in mussels, clams, oysters and scallops.