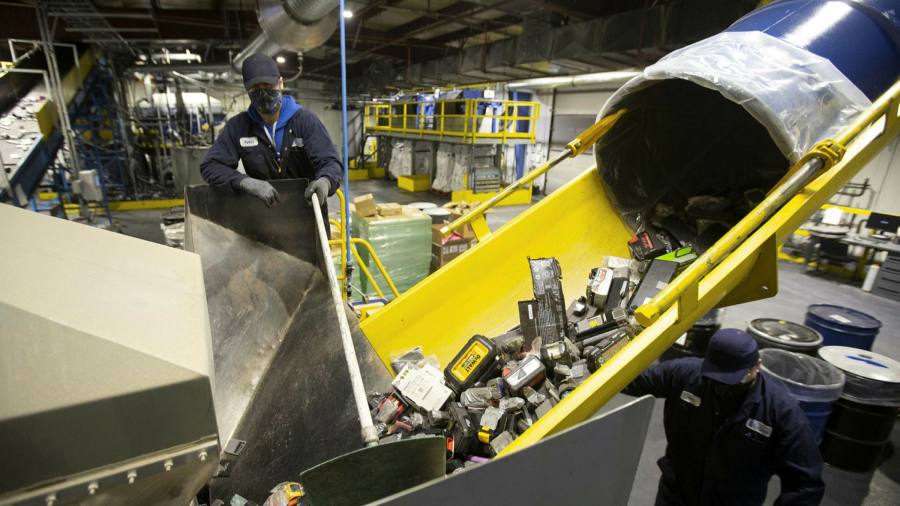 Glencore has announced plans to develop a recycling plant for lithium-ion batteries in the UK as it looks to tap into rising demand for the metals that are key to electrification technology.

The facility will be located at Britannia Refined Metals, its lead production business, in Northfleet, Kent, and will be capable of processing 10,000 tonnes a year of lithium-ion batteries, which are used to power laptops, mobile phones and electric vehicles.

The plant, expected to be operational by the middle of next year, will initially process all of the battery manufacturing scrap from a gigafactory being built by start-up company Britishvolt as part of a joint venture agreement.

Britishvolt, which has raised around £1.7bn in funding from warehouse provider Tritax and investment group abrdn to finance construction of its factory in Blyth, also hopes to open in 2023.

In an effort to burnish their green credentials and show they can sustainably supply the metals needed in the shift to a low carbon economy, miners are looking to beef up recycling, both from already processed metals to tailings dumps on mine sites.

Although Glencore is best known as a miner and commodity trader, it is also one of the world’s biggest recycling companies.

Its Glencore Recycling division owns the Horne smelter, one of the largest processors of electronic scrap in North America, as well as a continuous catalyst regeneration (CCR) refinery in Canada.

However, these plants are mainly for industrial metals such as copper and platinum, not battery metals.

The focus of the metals recycling is expected to shift to the rising popularity of EVs. Global sales of battery-powered vehicles more than doubled in 2021 to 4mn units, according to consultants LMC Automotive.

If that growth is sustained, the number of EV batteries reaching the end of their lives will surge in 2030, just as demand for raw materials is also set to increase. Greenpeace estimates 12.85mn tonnes of EV lithium-ion batteries will go offline between 2021 and 2030.

In a recent report, the International Energy Agency estimated that recycled copper, lithium, nickel and cobalt from batteries could reduce combined primary supply requirements for these minerals by around 10 per cent by 2040.

There are currently no substantial lithium-ion battery recycling facilities in the UK.

The recycling joint venture is the latest deal between Glencore, a FTSE 100 company with a market value of $70bn, and Britishvolt.

Last year, Glencore took a stake in the company as part of a long-term agreement to supply cobalt, a key battery material, from its operations in Norway and the Democratic Republic of Congo.

Timon Orlob, Britishvolt’s chief operating officer, said the company had been looking for a recycling partner in the UK to bolster its sustainability credentials.

“The JV will help us both to create a truly sustainable battery value-chain, create jobs and develop new battery-recycling technologies.”

The Britishvolt plant is expected to produce enough batteries to power 300,000 electric cars and create an estimated 3,000 jobs at the site in Blyth, along with an additional 5,000 in the area. It has also secured £100mn of funding from the UK government.

“This collaboration will help to develop an ecosystem for the recycling of batteries and critical minerals that will be essential as we electrify our automotive sector,” said Lord Gerry Grimstone, Britain’s investment minister.