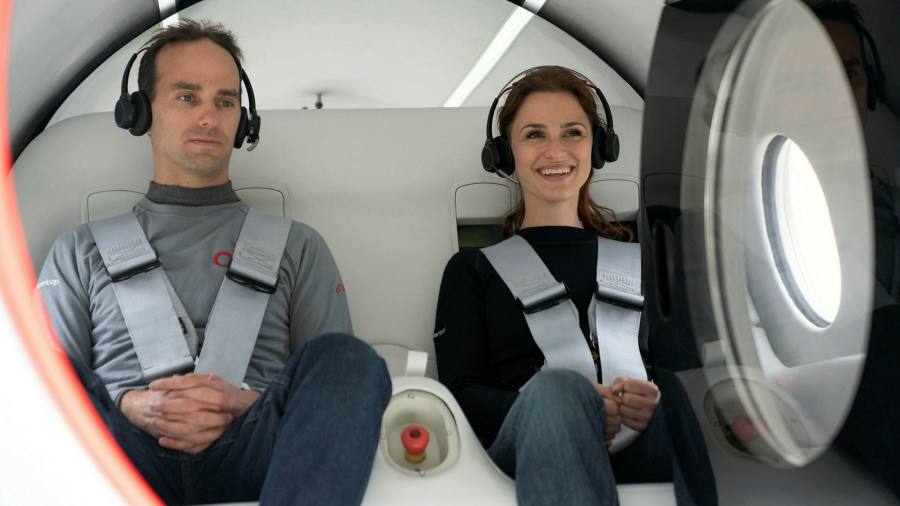 The future of transportation seems to be either no passengers or no drivers, depending on which companies you are betting on.

Simeon Kerr in Dubai and Andrew Edgecliffe-Johnson in New York report that Virgin Hyperloop made almost half of its staff redundant on Friday as it pivoted from passenger travel to freight.

The company is developing technology, first proposed by Elon Musk, which propels pods through low-pressure tubes at speeds of up to 670mph. Covid and global supply chain problems mean the logistics market has changed dramatically, the company reasons. Its change in direction was a response to strong customer interest in a cargo-based service, it said.

But one former senior employee tells us: “Morale is low and there is no confidence in the new direction.” Shunning passenger transport was triggering a “complete unravelling” at the group and would put its sole contract with the Saudi government in jeopardy, the person said.

Meanwhile, two priorities for the Chinese government are self-sufficiency in semiconductors and switching to electric vehicles capable of becoming driverless. However, slow progress with the former is also threatening to put the brakes on the latter.

Edward White reports that Chinese carmakers are likely to be dependent on foreign support from chip designers like Nvidia and chipmakers such as TSMC for years to come, with the domestic industry far behind in cutting-edge processors and the capacity to make them.

Nvidia has disclosed that at least 18 different Chinese companies are using its chips as a key part of their autonomous driving plans. The list includes Alibaba-backed AutoX and WeRide, which has been funded by the Renault-Nissan-Mitsubishi Alliance, as well as ride-hailing group Didi, which is backed by Apple.

Zeekr, a unit of Geely, has partnered with Intel’s Mobileye to launch a self-driving car in 2024. And Great Wall Motor, another of China’s biggest traditional carmakers, has turned to Qualcomm for its autonomous driving development.

Velu Sinha, a China semiconductor expert with Bain & Company, said Nvidia had benefited from “a decade’s head start” on the back of the success of its GPU (graphics processing unit) technology. “Billions of dollars have been pouring into this space. But right now, Nvidia continues to be in a really healthy spot,” Sinha said.

The consultancy McKinsey predicts that autonomous vehicles will compose 40 per cent of new vehicle sales in China by 2040, generating revenues of close to $1tn in sales of vehicles. Nvidia is set to make significant sales of its own in the years leading up to that milestone. As its chief executive Jensen Huang tells Venturebeat: “This year is going to be the inflection year for us on autonomous driving . . . And then next year, it’ll be even bigger.”

1. Trump launches Truth Social
Donald Trump’s new social media app debuted on Monday as the former US president tries to build a conservative rival to Twitter and Facebook ahead of a possible campaign to retake the White House. Truth Social is among brands being launched by Trump Media & Technology Group, the media start-up created last year in a bid to fight what he said was the “tyranny of Big Tech”.

2. Online safety wins UK cabinet backing
Plans to create the democratic world’s strictest internet safety rules have won the backing of the UK cabinet, despite protests from the tech industry that Britain will become a “global outlier” in internet regulation. A revised Online Safety bill will give Ofcom, the communications regulator, powers to require internet companies to use technology to proactively seek out and remove both “illegal content and [legal] content which is harmful to children”.

3. PrimaryBid gains SoftBank backing
The retail investor platform PrimaryBid has raised $190mn from investors including SoftBank and Hedosophia, venture capitalist Ian Osborne’s investment group. PrimaryBid, which allows retail investors to access IPOs and placings alongside institutional investors, is valued at about $700mn with this latest financing round.

4. Metaverse vs employment law
It is unclear how employee protections apply in the new digital realm. What counts as harassment? And can an avatar be discriminated against? asks Kate Beioley.

5. Video: Plant-based meat — cooling off?
A dip in sales growth and investor confidence in the US has analysts wondering whether the plant-based meat sector is going off the boil in its largest market.

Wednesday: There are still earnings of interest this week, with eBay reporting on its December quarter after the market closes. The European Commission will adopt the Data Act, strengthening data protection.

Sunday: Samsung holds a press conference on the eve of Mobile World Congress in Barcelona.

Tech tools — Pray as you go

The pray-from-home movement has helped fuel a substantial rise in the popularity of faith-based apps for your smartphone, which means they can also be used on the go and encourage users back to actual places of worship. The Christian Pray.com and Hallow.com, Muslim Pro and the Jewish PrayWay are among those hoping to encourage people to pray more, reports Patti Waldmeir. Some help users create virtual communities. Think Peloton, for prayer: technological tools that help people do things together that some would rather not do alone.