Qualcomm’s Cristiano Amon: ‘You have to bet the company’ 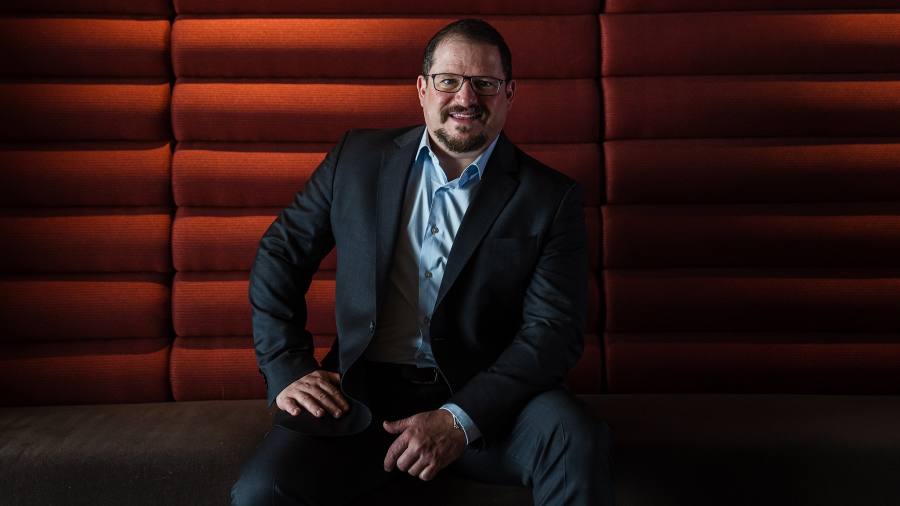 Cristiano Amon is awfully friendly for the head of a company known for its battles with Apple, Broadcom, and antitrust enforcers from Beijing to Washington.

The Brazilian-born 51-year old has been described as “gregarious”, “passionate” and “optimistic about everything.” In his San Diego office there is a life-size cut-out of the engineer, his smiling face and an outstretched hand forming a thumbs up.

Amon is chief executive of Qualcomm, a $192bn designer of semiconductors whose Snapdragon chips power almost all premium Android devices. Its modems give 5G connectivity to anything built by Apple, Samsung, Xiaomi and OPPO.

The primary task this decade for Amon — who first joined Qualcomm in 1995 and became CEO in June 2021 — is to expand beyond mobile phones into connected cars, the metaverse, and the internet of things.

“5G is about really creating an opportunity to connect everyone and everything to the cloud 100 per cent of the time,” Amon says over Zoom. “And we see an acceleration of digital transformation — it’s not a buzzword. Every single company right now is going through the process of accelerating digital. That’s why we have the semiconductor supply chain crisis.”

Amon had spearheaded the development of Qualcomm’s 5G strategy as president of its semiconductor unit. While he was convincing executives across carriers, infrastructure providers and device manufacturers to accelerate the launch by a year, he quoted the racing driver Mario Andretti: “if everything seems under control, you’re just not going fast enough”.

During his first months as CEO, the pandemic largely robbed him of his personal touch. The past two years have seen far more demand for chips than suppliers can handle, and while Qualcomm is described as a “chipmaker,” it can’t ramp up production, because it has none — it outsources manufacturing to the likes of Samsung, TSMC and GlobalFoundries.

Still, while covid surged Amon navigated quarantines in Taiwan and South Korea to secure a steady supply of chips from multiple sources, placing the company in a better position than rivals amid the chips shortage.

Working with suppliers to secure production is the challenge on which Amon thrives. Just as Apple’s Tim Cook has overseen direct investments into the research and development and machinery to produce the iPhone, Amon works with suppliers to design chips in every available capacity.

“We are pushing the limits of what a ‘fabless’ company is,” he says, using the industry term for a company that designs chips but outsources their fabrication, or fab. “We are one of the few companies in the industry that is actually, from a design perspective, driving the leading node — or advance semiconductor manufacturer process — so we have been a preferred partner of the foundries.”

[Tech rivalry] is like being in the gladiator business: you go in, you prepare, you go to the Colosseum

His predecessor, Steve Mollenkopf, oversaw years of conflicts that gave Qualcomm an antagonistic image. It fought activist shareholders who wanted to break it up, avoided a hostile takeover by Broadcom, and won a significant battle against the US Federal Trade Commission over allegations that it charged “unreasonably high royalty rates” for its intellectual property.

Qualcomm also underwent an antitrust case in China, where it ended up paying a $975m fine. And Beijing forced Qualcomm to abandon a $44bn acquisition of Dutch peer NXP. Apple, meanwhile, fought with Qualcomm for years, accusing it of price-gouging for access to its patents, before settling in 2019, giving Qualcomm a $4.7bn boost in revenue.

Amon’s challenge is to move beyond conflicts and to reposition the company as a critical supplier to industries moving into the digital era. Qualcomm needs more partners than ever, and Amon was appointed as the smiling face to help make that happen.

Amon’s message to investors is that the company’s $100bn total available market will grow seven times this decade as Qualcomm diversifies.

In the metaverse, where Qualcomm already works with Microsoft and Facebook parent Meta, Amon says the opportunity “could be as big as the smartphone itself.”

In automotive, Amon wants to make sure Qualcomm isn’t just making chips but is designing platforms — a “digital chassis” — to power cars’ infotainment systems and enable them to drive autonomously.

He says 23 of the major 26 global automakers, including General Motors, BMW, Renault, Volvo and Honda, are partners. And in October Qualcomm paid $4.5bn to acquire the autonomous vehicle software business of Veoneer, a Swedish auto parts maker.

Investors have been slow to grasp Amon’s messages. From last January, when the company announced Amon would be taking the role, to mid-October, Qualcomm shares fell 17 per cent. But by early this month they had shot up 53 per cent, to a record high, after Amon demonstrated deft handling of the supply chain crisis.

Amon compares the market Qualcomm is tackling with the cloud groups Microsoft, Amazon and Alphabet. “You look at how valuable those companies are and you say, why is that? Because you’re assuming an exponential growth year-over-year of the cloud as more data moves to the cloud,” he says.

“Well, where’s the data coming from? Who is actually connecting all of those different devices to the cloud? That’s us! So, if you believe in that opportunity, you should believe in a Qualcomm opportunity. That’s the opportunity I have as CEO.”

Among the biggest risks is that Qualcomm’s Chinese clients develop their own integrated circuit products, as Beijing’s “Made in China 2025” campaign targets 70 per cent semiconductor self-sufficiency by 2025. Few companies are as exposed to China as Qualcomm: last year two-thirds of its $33.6bn in revenue was earned in the region.

Apple is demonstrating how a client could wean itself from Qualcomm. In 2019 it acquired Intel’s modem business and launched a multiyear campaign to catch up on 5G modem technologies. It dropped Intel processors and is making “Apple Silicon”.

Who is your leadership hero?

I have had the fortune to have had many mentors. Many different people from all walks of life who have had an impact.

What was your first leadership lesson?

Surround yourself with people that are better than you.

If you were not a CEO/leader, what would you be?

If I had not chosen an engineering career — and I love technology, especially communications and wireless — I would have gone to law enforcement.

Amon says he understands the challenge. Even before becoming CEO, he orchestrated a $1.4bn deal to acquire Nuvia, a start-up founded by former Apple chip architects. Nuvia’s mission had been focused on CPUs for data centres but Amon is switching the focus to consumer products.

The stakes are existential. “You have to bet the company,” he says. His go-to comparison for today’s tech rivalry is the ruthless world of Ancient Rome. “Especially right now, it’s like being in the gladiator business: you go in, you prepare, you go to the Colosseum,” he says.

“The outcome could be one of three: You can win, you can lose, and you can both lose. And if you win, all that you have accomplished is the right to go to the Colosseum one more time.”

The metaphor is blunt, but even here Amon’s friendly side has stopped him from pointing out that gladiators don’t merely lose, they are killed. “I used ‘lose,’”, he says with a smile, “because I didn’t want to say the word ‘die.’”