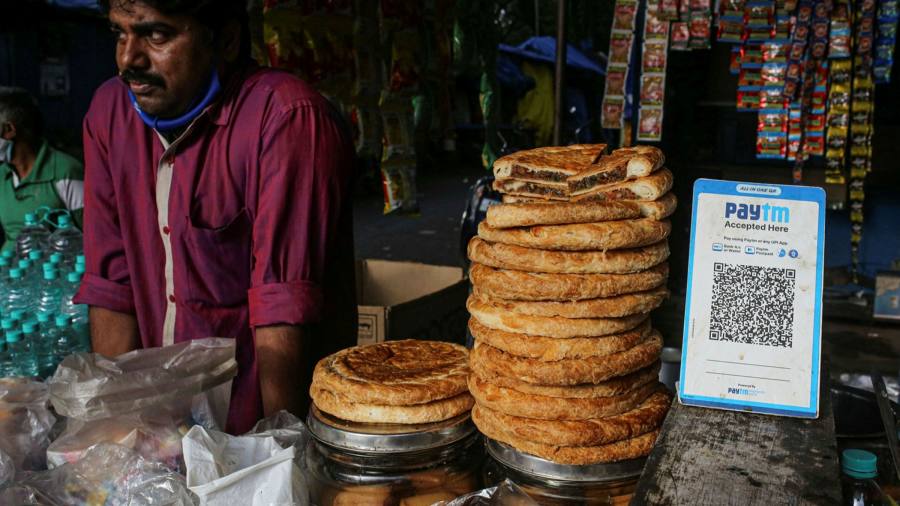 Shares in Paytm fell more than 13 per cent on Monday after India’s central bank barred a division of the payment group from signing up new customers in the latest setback for the company following its blockbuster initial public offering last year.

The SoftBank-backed technology company founded by Vijay Shekhar Sharma was once a darling of India’s booming start-up scene and raised $2.5bn in India’s biggest ever IPO in local currency terms in November. But Paytm has endured a difficult period as a public company as investors worry about profitability.

The Reserve Bank of India issued its interdiction against Paytm Payments Bank, the company’s associate bank, after markets closed on Friday, demanding that an IT audit firm be appointed “to conduct a comprehensive System Audit of its IT system”.

Paytm touts its online banking offering, launched in 2017, as “India’s most sincere bank” aimed at helping millions of people access the financial system. It markets itself as having “no paperwork, no account opening” and claims to have 100mn verified customers. Payment banks can offer limited financial services, including taking customer deposits, but are not allowed to give out loans.

Payments Bank will only be permitted to add customers again after the RBI is satisfied with the IT audit, the notice said, adding that the central bank was taking action “based on certain material supervisory concerns observed”.

Paytm said that it was working with the regulator and that the bar on new customers would not affect its other services or damage profits. “Paytm believes the measures imposed upon [Payments Bank] will not materially impact Paytm’s overall business,” the company said.

The company was rocked by more bad news on Sunday after the Indian Express newspaper reported that Sharma was allegedly involved in a collision with a police car in New Delhi last month.

Paytm said the complaint related to “an alleged minor motor vehicle incident” that had caused no damage to property or individuals. The company insisted that “requisite legal formalities were completed on the same day”.

Paytm is fighting investor concerns that it is far off turning a profit. Its revenues for the three months ending December 31 rose compared to the previous quarter, up from $151mn to $204mn. But losses after tax and exceptional items also widened, from $64mn to $104mn.

Your crucial guide to the billions being made and lost in the world of Asia Tech. A curated menu of exclusive news, crisp analysis, smart data and the latest tech buzz from the FT and Nikkei