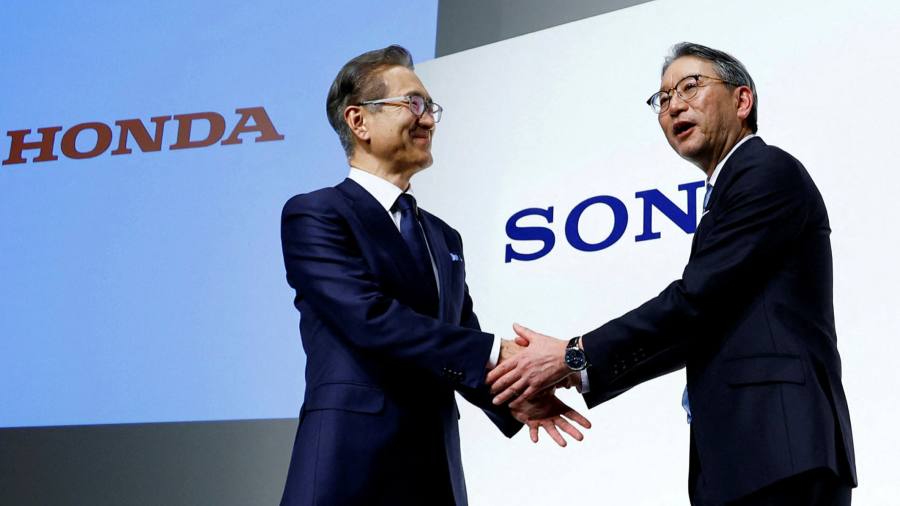 Somewhere in the ether between their Tokyo headquarters, a fraught debate must now be crackling between two of Japan’s greatest companies. If their planned joint venture succeeds in creating an electric vehicle champion to challenge Tesla, should the new power couple be known as Sonda or Hony?

Either way, the announcement last Friday that Sony and Honda were joining forces to produce EVs looks like much more than a standard strategic alliance. Important precedents have been set and important risks taken. Whatever its outcome and cost, this is the kind of experiment Japan needs more of in the longer term: a pooling of resources with a tacit admission that no one working in either cars or consumer electronics are in the business they thought they were any more.

Some analysts played down the surprise factor of the union and the scale of the probable benefit to both companies. At the Consumer Electronics Show in Las Vegas in January, Sony showed off prototypes of its Vision-S and Vision-S 02 and formed a new EV subsidiary, but stressed that it was not looking to build cars itself. Honda, meanwhile, has been looking exposed by its lack of a clear EV strategy in an industry where that is the trillion-dollar narrative. Two companies in need of partners, so in that light a comfortable pairing.

At the same time, argue analysts at Pelham Smithers Associates, the logic is shaky in places. Before the joint venture, Sony’s EV business could be read as a showcase of in-car electronics (games systems, music systems, screens, etc) for the market at large.

By pairing with Honda, and despite strong claims to the contrary, Sony has probably given up on the idea of selling its car electronics capabilities across the industry. The threat to Honda, meanwhile, is that it ends up performing the role of mere assembler for Sony — a role that no confident global player wants, which explains why Apple has not yet managed to find a high-end automaker willing to team up with it.

But for all these caveats, several elements of the Sony-Honda venture stand out as landmarks for corporate Japan. The first is the extent to which Honda’s willingness to enter into this partnership may be read as an admission of its shortcomings — not as a crafter of hardware, at which it remains excellent, but as a master of software. For Honda and other automotive incumbents, one of the harshest lessons taught by Tesla has been the success of a vehicle built to a significant extent around its user-facing software.

Versions of this issue have long afflicted Japanese companies: the relentless ascendancy of the software platform as the defining feature of consumer electronics has exposed a huge zone of vulnerability. Sony, when rated against Apple, may not look world-beating on this front but, as a developer of consumer platforms (particularly the PlayStation), it is probably the best in Japan. Other Japanese companies would be wise to understand the psychological leap that Honda has made.

A second precedent is set by the histories of these particular two companies, a duo that, for many reasons, are exemplars of both entrepreneurial vehemence and rebellion.

At the press conference to announce the joint venture, and emphasise the cultural fit, a slide juxtaposed pictures of the two founders of Sony with the two founders of Honda looking every bit the bespectacled visionaries they were. Their grins, meanwhile, disguised a pugnacious contempt for authority. In their early days, both companies had transformative run-ins with Japan’s manipulative trade ministry (which tried to stop Honda making cars and Sony receiving the licence to produce transistors) and were forever defined by defying it.

The two companies have, satisfyingly, arrived at their partnership without the trade ministry’s involvement. More critically, they have done so in spite of their fiercely cherished independence. As such, this partnership acknowledges how far both companies have been forced to reassess their priorities, and implicitly recommends that other companies do the same.

Both Honda and Sony’s chief executives said a stock market listing for the joint venture was something they would consider. But for the sake of a corporate Japan in need of positive bellwethers, and investors in need of a narrative, it should be seen as actively desirable.

This is a market in ever more pressing need of big, pure-play tech companies. A listed Hony or Sonda may never command more than a fraction of the market cap of Tesla. But its stock price would stand as a vital index of the ways in which, with a bit of creative thinking, Japan could attach much higher valuations to its greatest treasures.