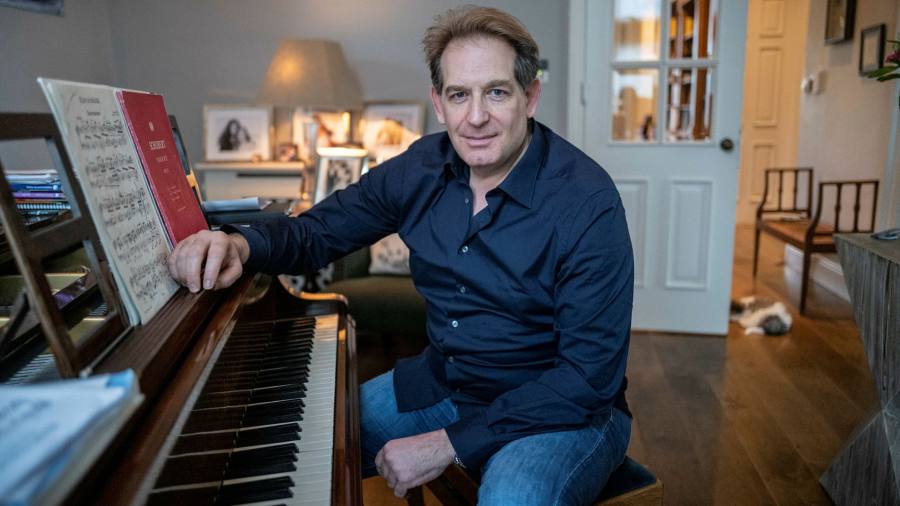 Entertainment lawyer Jamie Barber, 50, became a restaurateur in 1999, when he founded Hush Mayfair with Sir Roger Moore and his son Geoffrey. He went on to become a serial restaurateur, operating dozens of London eateries, and selling some along the way.

Barber’s restaurant group, The Hush Collection, has 235 employees. In 2020, following lockdown closures, turnover was £8.42m, compared with £10.25m in 2019, and delivery revenue for Haché Burgers was five times higher than in 2019. In November 2021, Barber launched My Supper Hero, an online meal kit delivery service, with musician and presenter Myleene Klass.

1988: Associate of the London College of Music (ALCM)

Did you think you would get to where you are today?
I always wanted to be in business, but I did once fancy myself as a record producer and songwriter. From 1997 to 1999 I would go to George Michael’s studio after my legal work, to write an album with him and play the keyboards.

When his Aegean record label closed, I didn’t like the idea of just being a lawyer. I had been advising Geoffrey Moore (son of Sir Roger) on unwinding commitments he had made to a disastrous themed restaurant called Spy Café, based around his father. After extricating Geoff from his various contracts, I asked him what he thought about opening a glamorous restaurant. He said he had no idea how to do that. I said I had no idea either, but maybe we should try it together.

Somehow or other we got Hush off the ground. Sir Roger was a massive help and put us on the map. He introduced us to people, promoted the restaurant and made a material investment at the outset. He invited his friends Sir Michael Caine, Sir Sean Connery, Bill Clinton, Tony Curtis and Joan Collins.

At 27, I wasn’t surprised when it was a success almost immediately. In your 20s you think everything is possible. I had raised £1.5m through friends and family. Over the years I have probably put in more than £1m of my own money.

How has the coronavirus pandemic affected your business?
As we shut at least half our business, we had to react quickly. Very early on we engaged with our major stakeholders — suppliers, creditors, landlords, banks and shareholders. We had to make sure we could maintain supplies with all these people and preserve our cash flow during the first wave.

That is when relationships over 20 years become so important, because people trusted us. Half of the business went into furlough and we found that we could operate the whole restaurant group with a tight executive team of five. There were so many negotiations — I have never been so busy as I was during the lockdowns.

If a business stops producing revenue, creditors still need paying. We had to let about 20 people go. Without furlough we would have had to make 150 staff redundant. You cannot carry on paying people when you are closed.

I believe we handled coronavirus in a calm, measured and entrepreneurial way. Though challenging, it was not something that became hugely stressful.

Did you have to diversify to survive?
We did not diversify, but the delivery business became our only source of revenue. We had to take on another 20 chefs. We really needed them, as our existing staff were often self-isolating even if they were not ill.

Have you found it difficult to recruit staff in recent months?
Recruitment is a challenge for the whole of the hospitality sector. As we kept a chunk of the business open during the pandemic, we have had fewer issues than other businesses. We tried to keep our teams intact. A lot of places closed completely for a year then found it hard to recruit new teams.

We too have lost staff from Europe who left and could not come back, and people who decided to do other things, from trading bitcoin to driving Ubers.

Was your first £1m a major milestone?
We spent many disruptive years expanding, starting up and selling ventures, so you never really declare much profit. In 2020 and 2021 we were not selling or opening premises, just operating the restaurants to the best of our abilities, and we hit the first £1m profit in October 2021.

It was a great milestone. We did not celebrate because people were still in the middle of the pandemic. The real sense of achievement is that we have been able to hang on to our business and embark on 2022 from a position of strength.

What was the most challenging period of your career?
It was 2018 and 2019, the Great Casual Dining Crash. Most of the big casual dining chains were struggling, closing restaurants and undergoing insolvencies like Jamie’s Italian, Byron, Gourmet Burger Kitchen, Prezzo, Café Rouge and Bella Italia. Our Cabana Brazilian group had its toughest times then. We had to close our four out-of-London restaurants in Newcastle, Leeds, Manchester and Southampton. It’s not easy letting people go. I was mentally drained.

It was a sector-wide crisis. There was a slowdown in consumer confidence, coupled with an almost doubling of business rates. Wage inflation and food prices started to increase rapidly. There was oversupply, following a huge overexpansion of restaurant chains, driven by venture capital. It was two years of hell, but we are out of it.

What did you have to sacrifice to start the business?
I had to sacrifice security and the ability to quit. With your own business you need to keep going and work through issues, but it was hugely exciting. Victoria Beckham came to the launch of Hush, and it immediately became a celebrity hang-out. Fortunately, I am not fazed by famous people. I had plenty of exposure to them during my legal career.

What is the secret of your success?
I’m tenacious and I persevere. I have done 28 start-ups and they are all painful. You need to have a very clear vision, and the confidence to achieve that vision. Sometimes, very rarely, a restaurant just does not work out and we have had to close it.

The first time I had done anything that failed was opening Shumi, my second restaurant, in 2003 in St James’s. We set out to create a glamorous Italian restaurant where the serving of dishes was inspired by minimalist Japanese presentation. The problem was people got confused and they thought it was an Italian Japanese fusion restaurant. After 18 months I realised that it is not your deals that define you, but how you get out of the bad deals.

Shumi finally came together under the control of Alan Yau, a brilliant restaurateur from Hong Kong. I retained partial ownership until I sold my stake three years later, when I pretty much broke even on the whole venture.

What was your best preparation for business?
My legal training and career were my only preparation for business. It was fabulous training and gave me familiarity with commercial arrangements and negotiation. I really enjoyed the interaction with clients and I liked to arrange business structuring for them. This training was the shoehorn that got me into Hush, as I recognised an opportunity when Geoffrey became my client.

What is your basic business philosophy?
I’d say you must have a strong sense of “why” you are actually doing what you do. It is also essential to cultivate long-term relationships with suppliers, banks and shareholders. If you treat people well, with honesty and integrity, they will like you and be there for you when you need help.

Do you want to carry on till you drop?
I have no interest in retiring. I just enjoy building things from scratch and giving birth to projects. In 10 years I would like My Supper Hero to be a market leader in the high-end meal kit subscription space. It is a way for people to eat a quality dinner at home, with 10 minutes of effort, and was born out of our own monotonous experience of meal preparation during lockdown.

Have you made any pension provision?
I have nothing other than an auto enrolment pension. I will rely on my shares in the ventures for capital. A pension is not high on my list of priorities, nor really built into my mindset.

Do you believe in giving something back to the NHS?
We were co-founders of the Feed Our Frontline NHS campaign, launched in March last year, taking quality food directly to frontline staff at the height of the pandemic. We gave away hundreds of vegan and beef burgers, and delivered them to London hospitals, because key workers coming off long shifts found that supermarkets, restaurants and cafés were closed.

What do you consider as an indulgence?
I have weekly jazz piano lessons, which are an indulgence in terms of time if not money. A glitzy indulgence is the electric Jaguar I-Pace that I bought in November. But we are generally not extravagant. We are happy just to spend time together as a family.